Weeks of planning, washed out by rain! 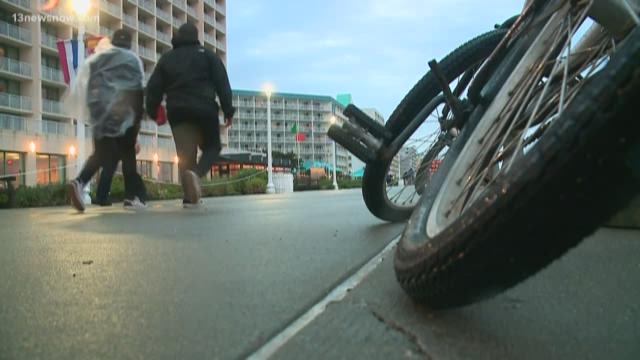 VIRGINIA BEACH, Va. — What started off as such a promising day really ended in disappointing fashion for a lot Something in the Water concert goers.

“I don’t know why they would cancel it now after we have been out here all day waiting,” said Justin Speaker.

“You got people standing, waiting in line, took days off of work and school to be here and we got to miss the whole day, added Zach Parker.

Even some of Pharrell’s biggest fans were turning on the local music legend. They said his team should have been more prepared in case bad weather moved in.

“It’s just a little disappointing that no one was getting alerts or anything and then out of nowhere, they just say it's canceled,” said Speaker.

Inniyyah Johnstone felt like she was lied to. The SITW website says "rain or shine" and she bought a poncho, so where is the music?

While most people had Oceanfront restaurants and shops to keep them entertained while they waited, people at the park and ride were stranded with nothing to do.

“We went down to the amphitheater to the ride-share and we were there for like five hours and they kept saying, 'It’s only one more hour, one more hour.' And people are still there and they didn’t get any notification of when it's going to be ready or whenever,” said Parker.

People also said when the city requests that you ride your bike and you do it even in a rainstorm, only to have them cancel on you last minute, it’s a frustrating feeling.

“We rode our bikes a lot of blocks to get here in the wind, so we are a bit disappointed,” said Ellen.

But, it was a tale of two reactions.

People like Dean Gonsalves from Newport News were disappointed about the canceled acts but, said the weather is out of anyone's control.

“Especially during this time, during the spring time, that's just how it is here in Virginia as far as the weather,” he said.

“It is what it is. It's nasty out here, so I get it. Better safe than sorry,” said Kayla Reynolds, who missed seeing Migos because of the canceled shows.

Miami attorney Donnell Hicks said this weather is a stark contrast to his hometown Friday, but he's going to stick it out all weekend in Virginia Beach and not miss an act moving forward.

“It's rainy, overcast, but I love Virginia Beach. I love Pharrell. I love what he's doing here and he's bringing the community back,” said Hicks.

The festival tweeted Friday that portions of tickets will be refunded. Pass holders should keep an eye out on their emails for that.