Sprint Boat Racing began in New Zealand in the 1970s and is now making waves in the Northwest. 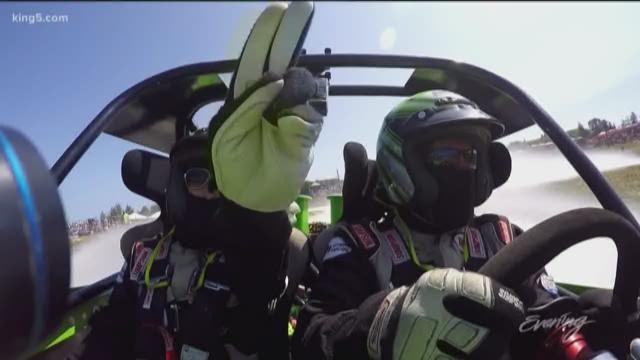 PORT ANGELES, WASH. — Sprint Boat Racing began in New Zealand in the 1970s and is now making waves in the Northwest.

These two-person crafts can reach speeds up to 90 miles an hour. If you make a wrong move, two things can happen: you’re disqualified, or you crash.

Port Angeles residents Dan Morrison and Cara McGuire have been one of the sport’s most dominating teams since they started racing together nearly 10 years ago.

Morrison is the driver, while McGuire helps him steer by navigating, with her hands.

"I just point him in the right direction and when he starts going in the wrong way I try to lead him back in the correct channels," said McGuire.

But these two have always been guiding each other long before they started racing. That’s because they're more than just crewmates. They’re also father and daughter.

"I think that they thought I was the only child crazy enough to say yes to getting in the passenger seat,” said McGuire.

The object of the sport is to complete a sequence of turns in waist-deep water as fast as you can. But teams don't find out which way the course goes, until the night before they hit the water.

With the high speeds and tight turns, beaching your boat is common. But safety is always at the center of the sport.

But for Morrison & McGuire, the thrill of racing far outnumbers the risks.

"You see these boats coming at you at 80, 90 miles an hour. Eyeballs are coming. Next thing you know spray goes up. By the time the spray goes down he's on the other side of the track going in the other direction," said Morrison.

"It's really exhilarating, it's exciting and definitely gets your heart pumping," said McGuire.

So while some may not like things fast, wet, and unabashedly loud, that's exactly why fans of sprint boat racing are in so deep.