Meet Joseph Bates, a Marine from Virginia who used goats to overcome cancer and PTSD.

A unique bond between a veteran and some unlikely friends is helping him overcome the most painful moments of his life. 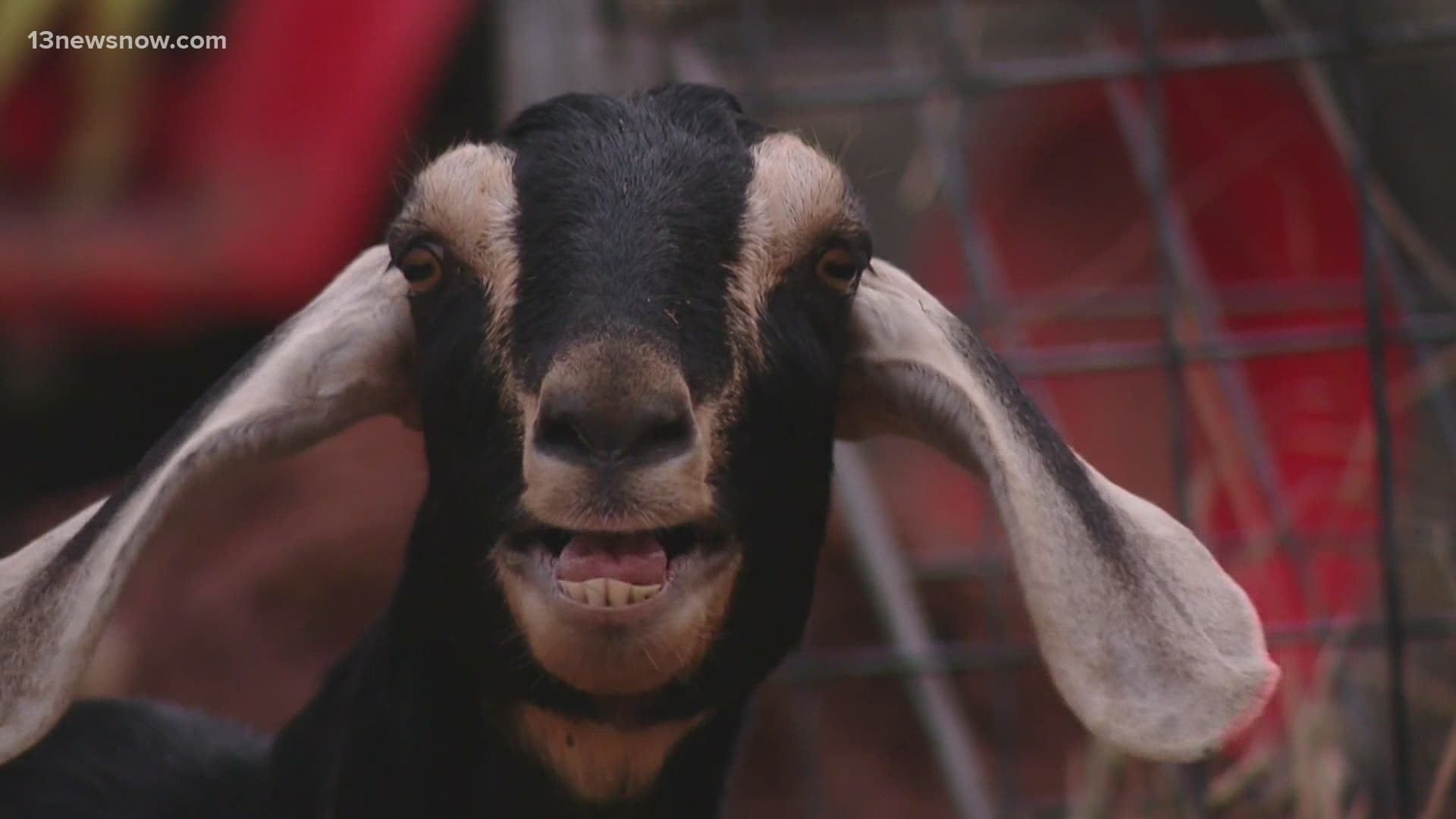 CEDAR BLUFF, Va. — The early sound of chickens and crickets signals the start of a new day.

On a frigid January morning in the rural mountain town of Cedar Bluff, Virginia, work has already begun on the Bates Family Farm well before the sun has risen.

Joseph Bates steps into his office for the first goat milking of the day.

"It took me about an hour to milk my first goat," Bates said, sitting down at the goat milking station on his nine-acre farm.

But as we'll find in this story: Joseph's coworkers are more like his family.

Life in the military

Joseph was not raised with a farming background.

Growing up near Orlando, Florida, Bates first joined the Marine Corps immediately out of high school. His military career spans more than two decades including assignments both nationally like Beaufort, South Carolina, and internationally like embassy duty in Nepal.

“I needed to grow up. I knew college wasn’t for me, yet... wanted it down the road but I lacked the maturity."

Bates' father served in the Marine Corps before him, so once it was time to enlist, Bates knew exactly where he wanted to go. While Bates grew, he also learned a lot during his 21-year-career in the military. One of the non-combat skills he acquired was the ability to make his own wine.

"I was sitting on the porch one day drinking my wine. Then I go, 'Wow, I could really go for some cheese right now.' And I figured if I could make wine, I could make cheese."

But it was a particular kind of cheese that Joseph was interested in.

Too much milk? Not a problem

He met Shannon when he was just 21.

"The best friend I ever had," Bates said of his wife. "She’s the reason I don’t drink, or do anything like that. I want to do better in my life. I want her to have a good life. She makes me want to succeed.”

Giving birth to three children and supporting his decades-long career in the military, Bates is not shy about his wife's love and support for his dreams. So when he discovered his newfound interest in making goat cheese, his wife supported him all the way through.

"It fascinated me. I told my wife when I retire, 'I’m going to raise goats.' She said, 'Alright, if it’ll make you happy.'"

After retiring from the Marine Corps in 2012, Bates moved the family to the western edge of Virginia's Appalachian Mountains. He first started with roughly a dozen goats, and Bates embarked on the hobby he once dreamed of before retirement.

"At first it was a hobby. I was drinking my own milk, making my own feta cheese. It was fun. Then we had too much!"

So instead of letting the extra goat milk go to waste, Bates' wife had an idea.

"We were just talking back and forth. She said, 'Well, I can turn it into some soap and lotion but it’ll never go anywhere.'”

That small hobby has since blossomed into a full-fledged business: Bates Family Farm, LLC., combining the goat milk into a line of lotions and soaps across more than 20 different scents, from "Coconut Mango," "Georgia Peach," "Lavender," and more. The products are sold both wholesale and individually across Virginia, including in Hampton Roads and the Shenandoah Valley.

Beyond the Commonwealth, his products are sold across the country, growing in areas like the Midwest.

The recipe is a basic one: distilled water, olive oil, refined shea butter, and the milk from Bates' goats. But it is that simplicity and farm-to-bottle approach why Bates believes his products have grown to become so popular in the area.

"That's over 96-percent of the recipe, we're one of the most natural products out there on the market for lotions."

Even during the COVID-19 pandemic, the business found ways to stay afloat. While the supply chain system came to a screeching halt during the spring of 2020, Bates said some of his longtime loyal businesses were able to bounce back sooner than expected.

"We were close there in the beginning because everything was shut down. Everybody was trying to figure out the virus, what people could and couldn't do. Our best-selling areas were shut down, but half our area opened up and those sales increased so dramatically that we actually made the same sales numbers from the previous year, but with only half our stores open."

He was surviving, both physically and financially, through the COVID-19 pandemic. For Joseph Bates, survival is something he's used to.

He was just 30 years old when he was first diagnosed.

"I had a Phase 3, borderline Phase 4 nasal pharyngeal carcinoma."

Diagnosed with cancer in 2004, Bates said he was given a 50% chance of beating it if he survived the treatment, due to its aggressive nature.

His six-month battle resulted in drastic weight loss, dropping from 220 to 140 pounds.

"As a cancer survivor you don’t know how to accept failure," Bates told 13News Now, sitting beside one of the several goat pens on the property. "After you go through it, it changes your perception, creates a desire to succeed. It makes you realize how short life is, and makes you want to accomplish so much.”

It would not be his only battle with cancer.

"It came back two years later and it was on my main lymph nodes. The doctor told me it came back, and I told him I couldn’t do that treatment again," Bates said, fighting back tears.

"Yeah, that's a tough one," he chuckled.

Despite surviving two separate bouts of cancer, Bates told 13News Now he still suffers from the long-lasting effects that stem from the treatments. Portions of his neck have been removed to stop the cancer from spreading, and he struggles with post-traumatic stress disorder.

"It's not like a one-time experience like a car wreck. Every day, going through treatment, the lights got a little dimmer. When I thought it couldn’t get any worse, it would get dimmer. It wears on you. But when you recover from it and you have to rebuild out of it, you have triggers inside of you and you don’t even realize,” he explained.

It was the slower pace of life that attracted Bates to start raising the goats in the first place, not intending for it to be anything except a small hobby while he recovered and figured out his life's next move.

After the farm's first babies were born in 2013, he soon discovered the goats acted as a sort of therapy for the Virginia veteran.

"They’re mischievous, they get into things, they’ll annoy the living daylights out of you," Bates said. "It teaches you to forgive, accept faults in life, and teaches you to enjoy life.”

From tending to the farm, it's the active lifestyle that Bates credits with being able to both physically and emotionally recover from his cancer treatments and PTSD.

"What’s great is whenever I’m having a bad day, I work with the goats."

Despite the hardships of Bates' old life, they only make him thankful for his new one.

"I got the goats, and they became my doctors."