Six gallons. That's more than five times the amount of blood that circulates in your body daily. That's how much blood Isaac Needell has donated in his life. 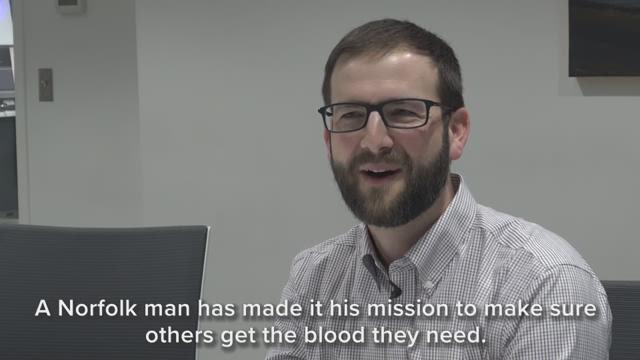 NORFOLK, Virginia — Isaac Needell is many things. A father, a husband, and a man who I'll proclaim "blood donor extraordinaire."

After more than a decade donating blood to the Red Cross, the Northampton Branch Library Assistant reached an important donation milestone: six gallons.

The city of Hampton and Hampton Fire Department dedicated posts to him on their Facebook pages about this incredible feat.

Needell first started donating as a teenager on trips to blood drives with his father.

"From a young age, I was interested in medicine and emergency medicine and helping out and being a part of rescue teams," Needell said.

Those aspirations were met for Needell. He worked as law enforcement for five years in Maine where he participated and helped lead rescue operations. He says his time working as a ranger helped motivate him to continue giving blood.

“I’ve worked on a couple of rescues here and there where people were going to need blood when they got to the hospital and so knowing I helped contribute to that and having a blood type that people can use pretty accessibly, I’m happy to donate whenever I can.”

Now, six gallons is a little more than five times the amount of blood that circulates in the human body daily. It equates to 48 pints. Needell has given 49 pints and counting. The Red Cross gave him a special pin to commemorate the occasion.

Needell is a "Power Red" donor. That means instead of the regular one pint of blood you give in a normal donation, he gives two every time he visits a blood drive.

A special machine is used during a Power Red donation that allows you to safely donate two units of red blood cells in one donation while returning the plasma and platelets to your body.

He has to wait a few months between each Power Red donation to give more blood, but he says it's a great way for him to give back to the community.

"I find it rewarding because I can help out. Just knowing that anybody who’s in the hospital needs a transfusion, needs blood that there’s going to be an available supply."

Since his father passed along this routine to him, will he pass it along to his children?

“Definitely. I hope to pass this on to my children and get them interested in donating blood. Also from a young age, I remember going to American Red Cross first aid classes with my father, so I’d like to get them engaged in the same thing. [Not only] to have a safety knowledge but giving them interest in giving back to the community.”