The idea for the project began when a middle school teacher saw a 2-year-old and her family at Greg Olsen's The Heartest Yard 5K. 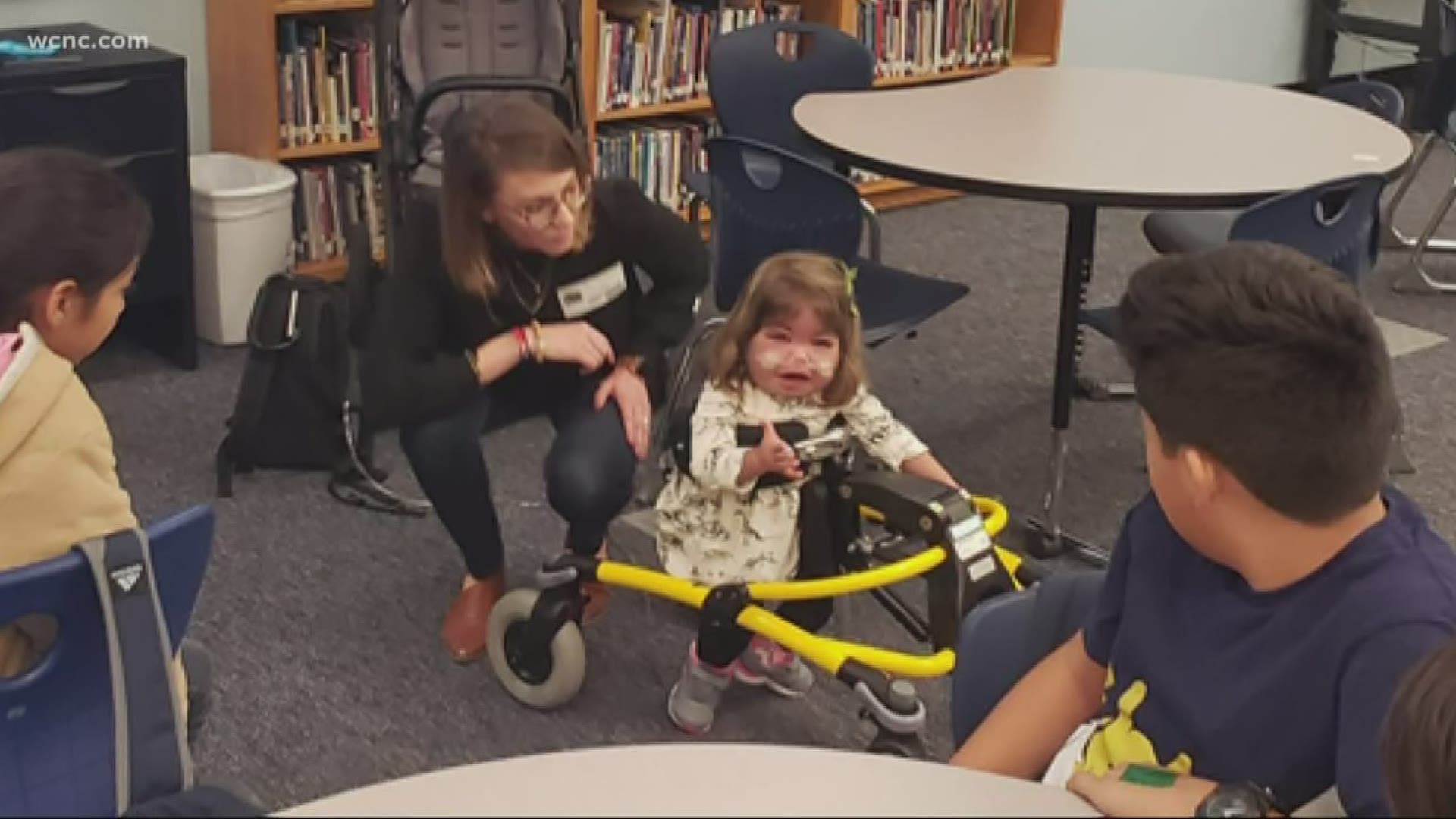 CHARLOTTE, N.C. — When it comes to middle school, students might expect to learn math and English, but at McClintock Middle School in east Charlotte, 6th-grade students are using 3D printers to solve real-world problems.

As part of project ‘Lead the Way,’ the students this semester were tasked with helping a 2-year-old who was born with Kubaki syndrome.

The idea for the project all began when Ben Davis, a 6th-grade modeling and design teacher, saw 2-year-old Emmett Hightshoe and her family at Greg Olsen’s The Heartest Yard 5K.

“I saw the need that someone was chasing her with a backpack holding the tank, and I thought, 'That’s something that 3D printing and 6th graders could accomplish so her parents don’t have to follow her around the house all the time,'” Davis said.

Emmett’s mother, Maleigh Hightshoe, said in addition to her genetic diagnosis, Emmett also has half a heart.

“She also with her genetic diagnosis, unfortunately, came along half a heart. Its Hypoplastic left heart syndrome (HLHS),” she said. “It just comes with a little extra equipment for us on a daily basis, she’s on oxygen 24/7.”

Hightshoe said she and her husband usually put the oxygen tank in a backpack and carry it around, but say it’s heavy and restricts Emmett’s freedom to move around freely on her own.

“Even sometimes if she’s just scooting and the oxygen is sitting there and I don’t know she’s scooting I’ll hear an 'Ah' and I’m like, ‘Oh yeah, I need to move that for you,’" Hightshoe said. "It will really allow her to gain that independence that she wants to grasp so badly.”

All semester, the students worked in groups designing, printing, and testing their models -- models that would give little Emmet her independence.

Many of the students designed oxygen tank holders that clip onto Emmett’s walker.

Davis said the students took the challenge seriously, “really thinking about the mathematics and the science and just getting to it and designing some really incredible things."

On Friday, the students presented their models to Hightshoe, who will be selecting one to use on Emmett’s walker.

But missing from Friday’s presentations, was 11-year-old Romello Wilcox, who was hit and killed outside the school last month. Davis says Romello was in his class and had just printed his project.

“He had just completed the printing and was going to come back the next day, after he passed, and complete his project," Davis said. "His group members pulled together and finished the project so his group is very excited to present his as well."

A very exciting day for the students who’ve gained a life-lesson, and for Emmett, whose life will now be more free.

Davis says he’s currently looking for his next project. He said they do a new one each semester and encourages anyone in the community with an idea, to reach out.