Found safe and unharmed: K-9 back home after getting spooked by fireworks

Igor is a Belgian Malinois who is microchipped and trained in explosive detection. 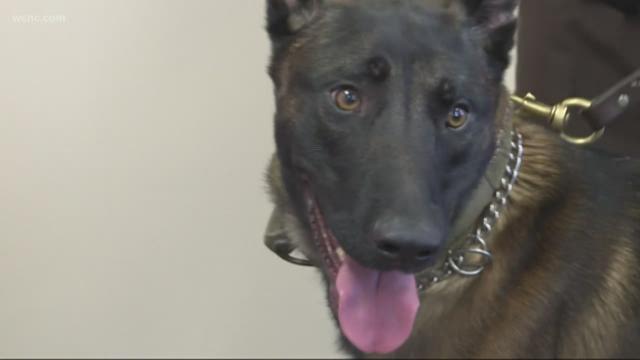 CABARRUS COUNTY, N.C. — The Cabarrus County Sheriff's Office has found a missing K-9 that got spooked by fireworks.

According to the sheriff's office, a tip called into the Cabarrus County Sheriff’s Office at 6:43 a.m. Monday morning led deputies to K-9 Igor, a missing Belgian Malinois trained in explosive detection. K-9 Igor was located at 284 Executive Park Drive, Concord.

Officers quickly arrived on the scene, confirmed K-9 Igor’s identity and took him to the vet where he is receiving a physical evaluation. K-9 Igor does not appear to have any signs of distress or injury.

“We would like to express our sincere gratitude to the public for their vigilance and outpouring of support throughout this ordeal,” said Cabarrus County Sheriff Van Shaw. “We’re glad to have Igor back.”

K-9 Igor went missing at around 9:45 p.m. on July 4, in the 900 block of Oregon Street in Kannapolis. The K-9’s handler took him outside to use the restroom. K-9 Igor was not on lead, which is the usual custom of the handler.

While outside, fireworks discharged near the residence. The noise from the fireworks startled K-9 Igor and he ran away. The handler was unable to retrieve K-9 Igor using verbal commands.

The entire situation was a rollercoaster of emotions for the entire Sheriff’s Office.

"I broke down, I started crying," says Deputy Brian McClellen, Igor’s handler. "Being away from him for that long, I’ve only had him about 6 months, but the bond that we've created as partners, it’s deeper than just a traditional owner and dog.”

Igor is obviously happy to be home too.

Deputy McClellen is thankful for the community, who rallied around them to help. Many searching for hours on end.

"People I’ve never even met, never even seen before. People from all over the Concord, Kannapolis, China Grove area just putting in work essentially looking for this little punk,” he joked.

Turns out Igor was just looking for a little peace and quiet. He was found not too far away, staying where there weren't any fireworks on the 4th of July. A woman spotted him Monday morning and called deputies who told her how to get him in the back seat.

She was able to lure him into her car using a Pop-Tart.

"When I rolled up he was actually eating food and when I said his name his ears perked up and his tail started wagging but he kept eating," McClellen said. "So he was like 'I gotta prioritize here.'"

Igor is trained in explosive detection. Because he's not a full patrol dog, he hasn't been exposed to loud noises like gunfire.

"If he hears the noises of a bomb going off we either didn't do our job right or we didn't get there in time,” McClellen said.

Igor will be taking a few days off but should be ready to get back to work when they have a training session on Thursday.

5 American road trips to take with the family this Summer