'I need a game warden,' Adrien Williams texted his mom, Nicole. He had found two injured eagles, stuck together by their talons after fighting. 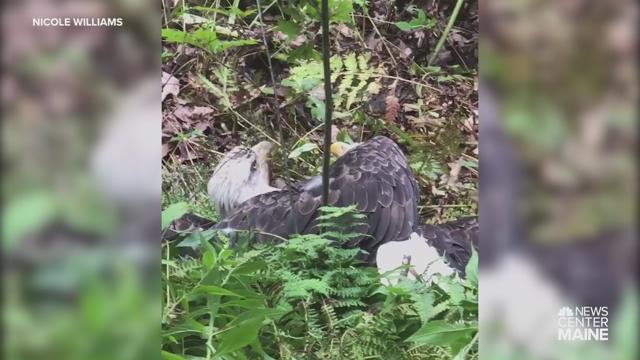 That's the text Nicole Williams got Tuesday from her son, Adrien — a familiar message from the teen, who goes out to check his game cam nightly.

Moments later, Nicole said she got a second text from the 14-year-old.

"I need a game warden," Adrien told her.

Not exactly the words a mom wants to read on her phone. So Nicole called her son to see what the trouble was, and he told her he'd found an injured eagle.

Nicole said she left work to drive home and assess the situation. In the woods, she found near Adrien two injured bald eagles, stuck together.

She said they called the Maine Department of Inland Fisheries and Wildlife to come and inspect the situation. With the help of Adrien, a responding warden was able to rescue both birds, one of which flew off immediately.

It was established during the rescue that the bald eagles had somehow sunk their talons into each other in mid-air while fighting over territory.

The other bird, an older eagle, needed some TLC, Nicole said.