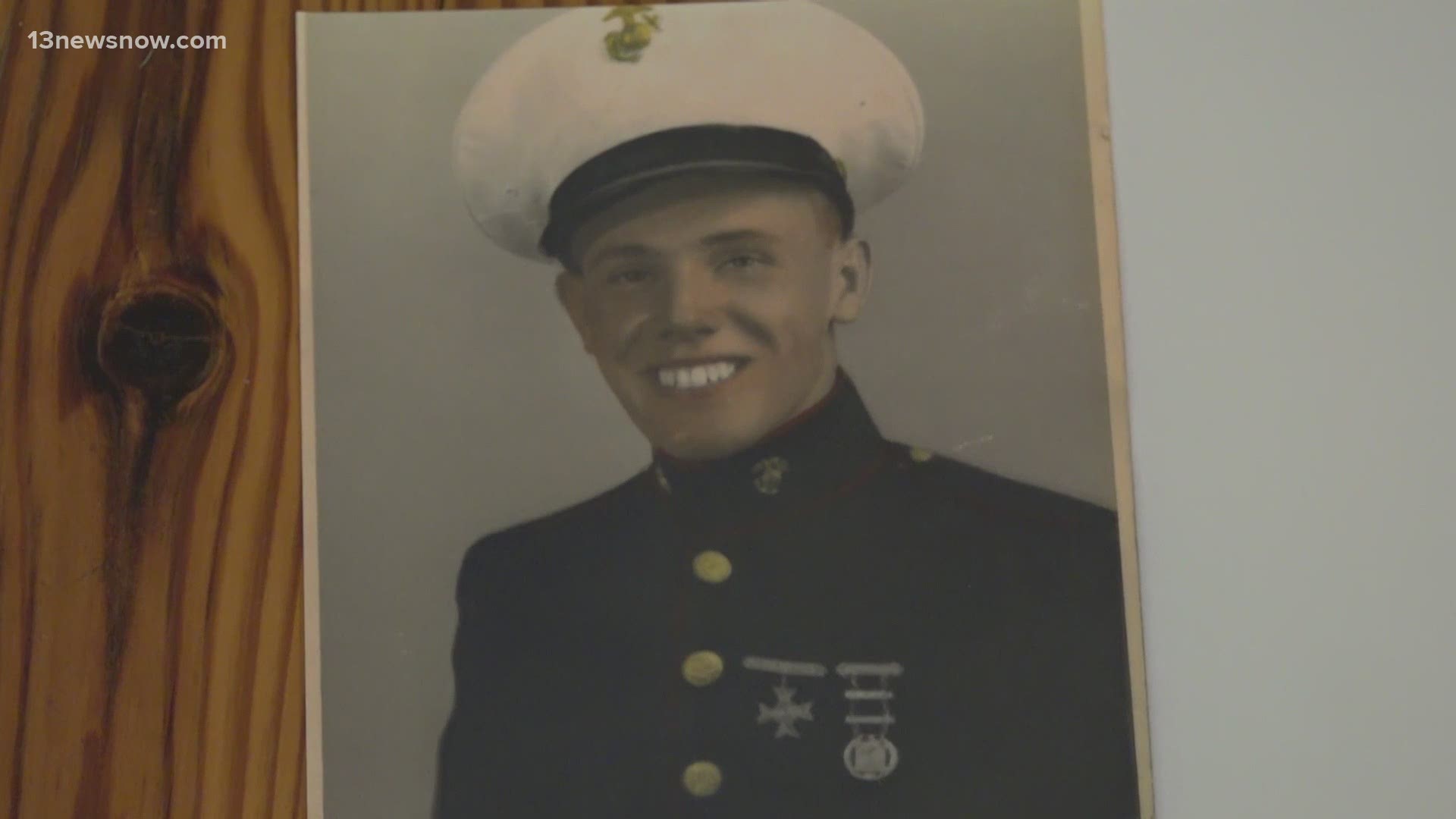 Marine Corps Private First Class Harry Lee Jackson Sr. was just 19 years old, fresh out of Maury High School, and on the front lines of Iwo Jima. It was March 20, 1945.

"There was a grenade thrown into the foxhole," said Jackson's son, Harry Jackson, Jr. "And of course he took his helmet and his body and he smothered the grenade. There were three other people who were saved. And in the process, he lost an arm, a leg, and an eye."

Jackson, Sr. earned a Silver Star and a Purple Heart. But his children believe he should be considered for the Medal of Honor.

"Two or three years before he passed, I asked him, 'Daddy, why did you jump on the grenade?'" said Jackson, Jr. "And he said, well, because he felt like it was his responsibility because of the other people in the foxhole."

Children seek upgrade from Silver Star to Medal of Honor for their father, USMC PFC Harry Jackson, Sr., who lost an arm, leg and eye after jumping on a grenade to save three comrades in WWII Battle of Iwo Jima. Initial request denied, children say they'll keep trying. #13NewsNow pic.twitter.com/6jOrIOOlTF

Sen. Tim Kaine (D-Virginia) and Rep. Elaine Luria (D-Va., 2nd District) petitioned the commandant of the Marine Corps, but 10 days ago,  the request was denied because it did not come from an officer within Harry Senior's original chain of command.

B.J. Hill, writing for the Commandant of the Marine Corps, wrote: "I know this is not the outcome you desired, but under no circumstance does this diminish the contribution your father has made to our country and Corps."

"And we'll continue to work and see if there is a way to get through the process and make sure his heroic acts have the right level of recognition," she said.

The Jackson siblings aren't giving up.

"I think he'd be happy if it brought pride and designation to the Corps, not necessarily to himself," said Jackson, Jr.

Jackson Senior's daughter Kay Gramling is hopeful that living witnesses to her father's heroics come forward, to help make the case for a medal upgrade.

"We need someone to come to our assistance to keep this working to see that our father gets the recognition he deserves," she said. "We aren't asking for ourselves, but we're asking for our father."

Historian Bryan Rigg, in his petition for a medal upgrade for Jackson, Sr., wrote: "By his inspiring action and valiant spirit of self-sacrifice, he not only protected his comrades from certain injury or possible death,  but also enabled them to rout the Japanese ambush and eliminate the threat."

There are currently 80 living Medal of Honor recipients.