Jessica Brunnemer kept the ring in her wallet. 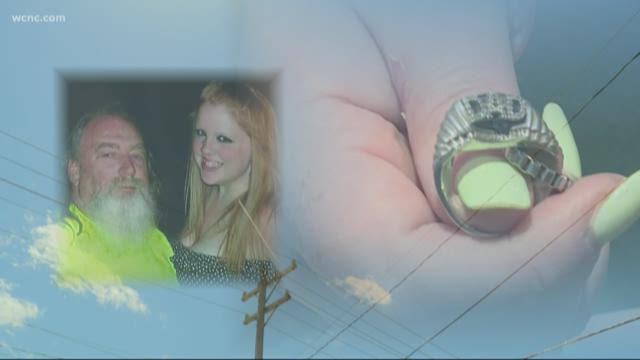 MONROE, N.C. — A Monroe woman is overjoyed after a sentimental memento that she kept in her wallet was returned to her after being lost for days.

"It was devastating," said Jessica Brunnemer.

Brunnemer was getting gas at a Shell station off West Roosevelt Boulevard late Wednesday night. She paid, set her wallet on her back bumper, and started fueling up.

Then she got in her car and drove off -- forgetting all about her wallet.

"I was panicking; I was an emotional wreck," she said when she realized she had lost her wallet after arriving home.

Brunnemer retraced her route from the gas station, looking for her wallet on the two-mile drive.

"I went up and down the streets looking for hours," she said.

For Brunnemer, losing her wallet wasn't just the headache of canceling credit cards. It was heartache.

"My dad was my best friend, and that was the only thing I had left of him," she said as she tried to hold back tears.

Brunnemer's father, who passed away four years ago, wore a silver ring that said "Dad" on it. It was a gift she and her brother gave to him years before his passing.

Brunnemer kept that ring in her wallet.

"It was hard. It was really hard. I thought I was never going to find it," she said.

Brunnemer searched all over. She even got the clerk at the gas station to pull surveillance video, but the cameras didn't get a good shot. She even made a police report in case it showed up at a pawn shop.

Brunnemer eventually turned to Facebook, making a desperate plea that was shared hundreds of times.

"Whoever has it, you can keep the cash. I don't care about the wallet -- just bring me his ring back," she said.

Then, when hope was dwindling, a man showed up Sunday at Brunnemer's doorstep. He had found her wallet and returned it with everything inside, including her dad's ring.

"I started crying," she said.

Brunnemer was so excited that she and her fiance didn't get catch the Good Samaritan's name. He told them he found it on the street, but they aren't sure which one.

"It did get ran over. You could tell because it's a little bent, but I still have it," she said.

As one search ends, another one begins. Now Brunnemer wants to reunite with the man who returned her wallet and ring.

Brunnemer said from now on she plans to keep her dad's ring in a fire-proof lock box so she never loses it again.

VERIFY: 'Avocado Stick' is a parody product, but many missed the joke

Housing vouchers expiring before families can use them