A great-grandmother got a Thanksgiving surprise she’ll never forget. Bob Segall explains how a backyard disaster turned into an unexpected gift from strangers. 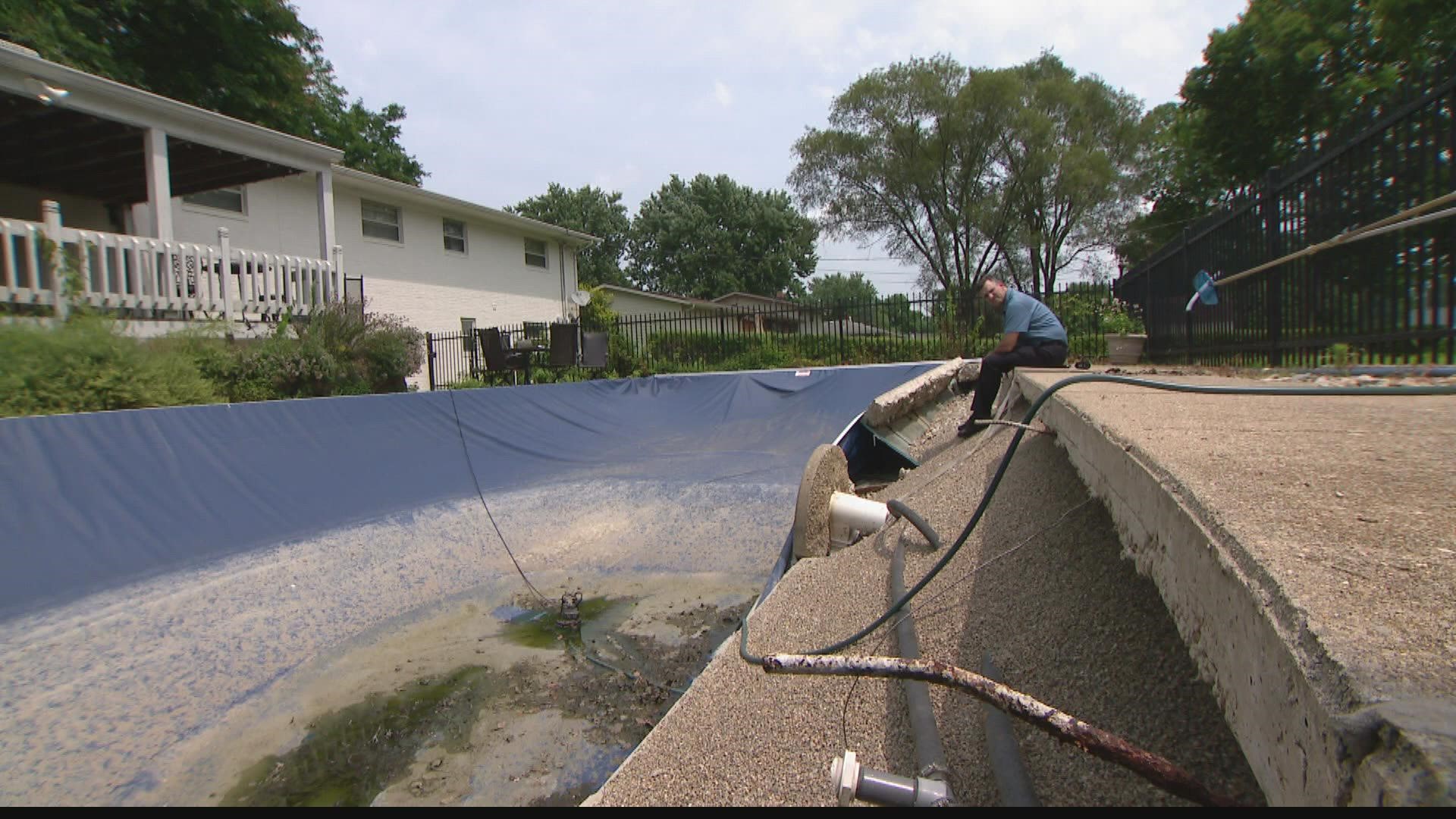 INDIANAPOLIS — At the age of 80, Kitty Smith decided it was time to buy her dream home.

Smith knew the inside of the south Indianapolis house needed a lot of work, but what she had always hoped for sat in the backyard: an in-ground swimming pool she could enjoy with her 29 grandchildren and great-grandchildren.

She used her life savings to buy the house, and last summer – as a pandemic raged across the country – the backyard pool was an outdoor safe haven for Smith and her grandkids.

“They were here, swimming and playing. I can’t tell you how great that was. This has just been my dream my whole life,” she told 13News.

But that dream was quickly shattered.

In February, after a night of snow, Smith looked out a back window to discover her swimming pool had suddenly turned into large hole filled with crumbled concrete and shattered fiberglass. The walls of her pool had collapsed, sending Kitty into shock.

Credit: WTHR
After insurance denied Smith’s claim, removing the collapsed pool and installing a new one would cost the greatgrandmother at least $80,000.

“My whole body just started going numb and shaking. I couldn’t believe what I was seeing,” Smith said, holding back tears as she looked over rubble that still sits in her backyard nine months later.

Heartbreak and another surprise

It’s hard to say exactly what happened after Kitty hired a pool company to close up her pool for the winter.

An engineering report suggests the collapse might have been caused by a leak that allowed the pool’s water level to drop too low. It also raises questions about the placement of a newly-installed pool cover, and whether that – combined with the pool’s low water level – created too much stress on the walls of the pool.

Regardless of the cause, Smith’s backyard dream had turned into a backyard disaster.

“Since February, I’ve had to look at this every day and, for me, it is heartbreaking,” she said.

Credit: WTHR
The walls of Kitty Smith’s pool collapsed in February, less than a year after she moved into her new home.

Adding to that heartbreak, Smith learned her homeowners' insurance policy would be useless. Despite having the same insurance company for four decades and paying for a policy that includes replacement cost value for the in-ground pool, Smith was devastated to discover her insurance company wouldn’t pay a dime for the disaster. Any type of leak in the structure of the pool is excluded from coverage. An insurance adjuster broke the bad news.

“He said to me, ‘I’m so sorry. I love to pay claims…but we can’t pay yours,’” Smith recalled. “I’m hurt by the way I’ve just been swept under the carpet.”

Smith was faced with a daunting decision: whether to let go of her dream or to somehow come up with the staggering costs of a new pool. She learned the price tag for a replacement pool would be $60,000, plus another $20,000 just to clean up and haul away the old one.

“I just can’t do it. I can’t,” Smith said. “I put everything I had into buying this house. Everything.”

Credit: WTHR
The walls of Kitty Smith’s pool collapsed in February, less than a year after she moved into her new home.

Kitty shared her story with 13 Investigates this spring to see if 13News could do some digging and figure out who’s ultimately responsible for the collapse. Months of research and phone calls revealed getting to the bottom of the complicated situation might take years, leaving Smith with a big hole in her backyard – not a pool for the grandkids – while waiting for a resolution.

So 13News shared Smith’s story with some folks who know a thing or two about swimming pools, and they developed a remarkable plan to make things right for a woman they had never met.

Over the past few months, a group of eight Indiana companies has agreed to come together to solve Smith’s backyard dilemma.

Michael Shebek, the owner of Westfield-based Automatic Pool Covers, took the lead by contacting his extensive network of pool industry installers and suppliers. When Shebek informed them of Smith’s plight and asked if they might be willing to help, the response was overwhelming. Many of the companies instantly agreed to volunteer time, labor and materials.

Within a few weeks, Shebek had reached his ultimate goal: commitments from enough companies to replace Smith’s collapsed pool with a brand new one – at no cost to her.

He asked APC vice president Mike Shadoan to work out the details to ensure all aspects of the project were covered.

“I think it’s a perfect time to help somebody out like this,” Shadoan told 13News. “All these people are willing to donate their time and effort for free just to help somebody they don’t even know. It’s pretty amazing.”

The contributing companies include:

Some of the companies are actually competitors – but not for this project.

“It’s really neat for all of our local pool companies to band together. I don’t know that this has ever been done in Indy before,” said Hermon.

“At this point, we’re just trying to prove to everyone that we’re stronger together,” echoed Crone.

“It’s just a matter of doing the right thing, being a good neighbor and stepping up and helping someone when they need some help,” added Hubert.

A few days before Thanksgiving, the contractors joined 13News to share the good news with Smith.

As she walked to the front door and saw her lawn filled with swimming pool contractors, the grandmother whispered “Oh my God” and covered her face. She then stepped off her porch and greeted every stranger with a hug.

“I don’t know your names but I know your hearts,” she said, also telling the contractors, “I love you.”

“We will pitch in and chip in and between all of us, make sure this happens,” pledged Shadoan. “You’re going to get a whole new backyard with a new pool…and this should cost you zero.”

The actual value of the group’s donation – including installation of the new pool and removing the old one – is approximately $90,000, he said.

“You’re what we need in this world – not for me, for everyone. Thank you!” Smith replied.

Weather permitting, work on Smith’s new pool will take place over the next few months to ensure it is ready by springtime.

Credit: WTHR
Local businesses have pledged to donate all the materials, labor and time needed replace Smith’s pool at no cost to her.

Smith told 13News the donation is an answer to her prayers. The contractors say it is a reminder to all of us about the power of giving.

“This is really cool. It’s nice to give back,” Hendrick said.

“Just wanted to be a part of helping somebody out,” agreed Ray, who attended the announcement with sons Chris and Steven.

After giving each of the contractors another hug and saying goodbye, Smith returned to her backyard to look at the mess that will soon be removed.

“Just no words. There aren’t words big enough to thank everyone,” she said. “I’m just so thankful.” 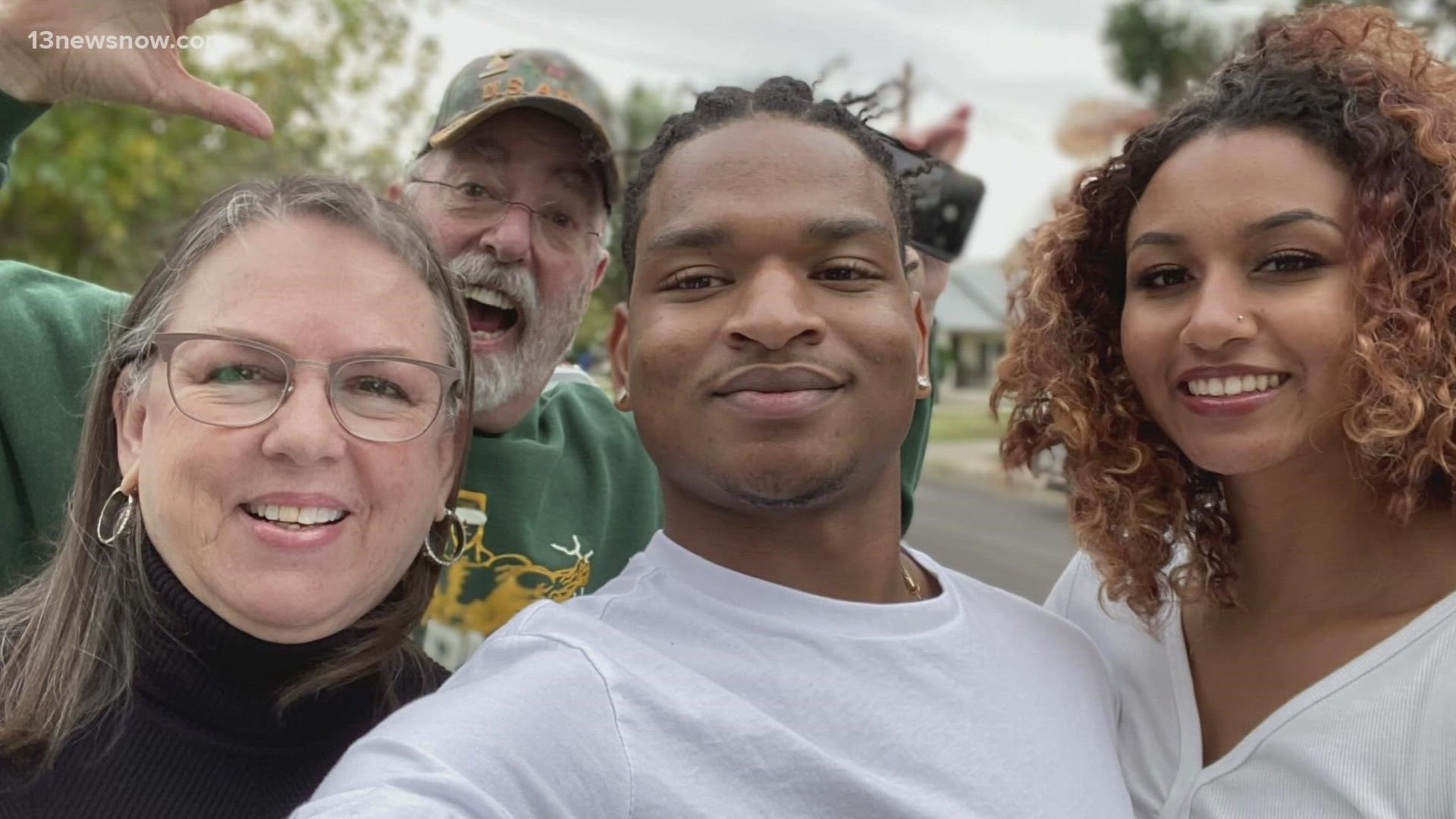