"You're an amazing person!" the sixth-grader from Virginia wrote. Little did she know the actor would send her a birthday wish back. 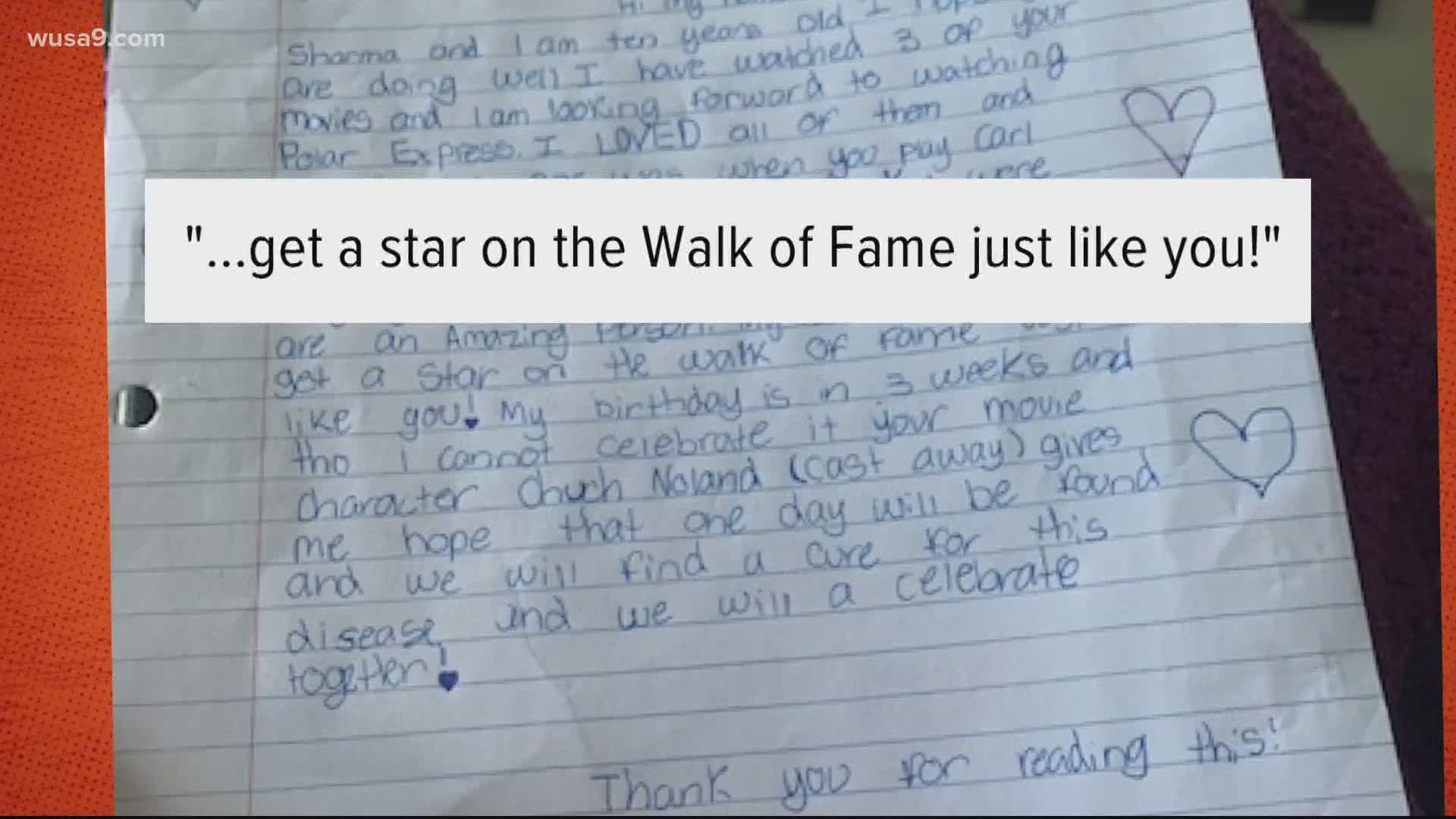 WASHINGTON — "Life is like a box of chocolates, you never know what you're going to get."

It's an infamous line from Forrest Gump, Tom Hanks' signature role. But it's also how one Virginia 11-year-old signed off a letter to the iconic actor, who decided to send a personal "Hanx-O-Gram" back.

Anoushka Sharma is a sixth-grader at Wolf Trap Elementary in Vienna. She turned 11 on May 23 and originally wrote Hanks as a way to practice essay writing, thanking him for being one of "her biggest inspirations" and thinking there was "no way" that the actor would actually respond.

The handwritten letter, adorned with blue hearts on a spiral notebook paper, thanked Hanks for inspiring her love of singing and theater, signing it off as his "biggest fan."

"I thought there was no chance he was actually going to read it," she said.

That all changed on June 13, when a certain brown envelope addressed to Anoushka appeared in the mail.

"One day my dad came into the living room and showed a letter and said 'It's addressed to you!'" she said, saying she had no idea what it was.

Once she saw the "Hanx-O-Gram" letter heading, her eyes lit up.

"Dear Anoushka, great to hear from another actor!" his letter reads, wishing her a happy birthday. "But as for the singing and guitar playing, I leave that to you!"

The 11-year-old, who is also actively involved in theater and does in fact love singing, said her dream is to eventually have a star on the Hollywood Walk of Fame like Hanks. She adores Broadway and loves performing.

Beyond the acting inspiration -- her favorite role of Hank's is Catch Me If You Can's Carl Hanratty, although she is also excited about the Polar Express -- Anoushka said it was Tom's altruistic and kindness that motivates her most.

"He's just such a great guy and does so many kind things for everyone," she continued, talking about how she was moved when she discovered that the actor had sent a typewriter to a fifth-grader who was being bullied.

In March, 63-year-old Hanks announced that both he and his wife Rita Wilson were diagnosed with coronavirus after exhibiting symptoms following a recent trip to Australia.

Since recovering, Hanks has shared photos of himself donating convalescent plasma, which some researchers have said might contain antibodies that help fight the virus if drawn from people who have successfully recovered from the virus.

While Anoushka couldn't celebrate her birthday the same way this year thanks to the pandemic, she said it was Hank's role as  Chuck Noland in Cast Away who gave her hope during recent times.

"My birthday is in 3 weeks and while I can't celebrate, your character Chuck Noland gives me hope that one day will be found and we will find a cure for this disease and we will celebrate together!"

Until then Mr.Hanks, if you're reading this -- Anoushka also wants to make it very clear that she has the perfect way to thank you for the kind letter.

"I've been singing since I was three and I have one song I have that I really want to sing for him one day," she said excitedly, saying that the letter is now framed in her room.

"It's so special and precious to me," Anoushka said. "I definitely think it's my favorite present I got from my entire birthday!"

RELATED: One man's mission to clean up the Potomac River on paddleboard

RELATED: DC protesters sing 'Lean On Me' in impromptu concert near White House