Danville Police Officer Melissa Carey was eating lunch at Nikki’s Family Restaurant when a waitress ran to her table asking for help. 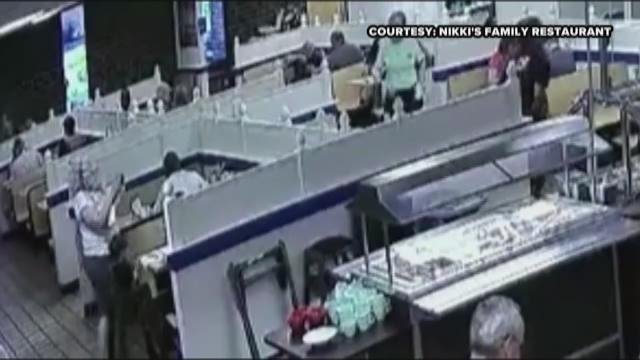 A two-week-old baby is alive thanks to a Danville Police Officer and a quick-thinking waitress.

Danville Police Officer, Melissa Carey was eating lunch at Nikki’s Family Restaurant when a waitress ran to her table asking for help. That’s after the parents of the two-week-old boy noticed he stopped breathing and was choking while sleeping in the carrier. Surveillance video shows Officer Carey running over to save the baby. Officer Carey even went to the hospital to check on the baby and the family. The mother said, “If it was not for Officer Carey, my baby would not be here.”

City of Danville Police Department
On August 13, 2019, Officer Melissa Carey was eating lunch when a wa... itress came to her table asking for help. The waitress pointed out a family whose two-week-old son who had stopped breathing. The child had been asleep in the carrier when the mother noticed the child was in distress-apparently having become choked.

RELATED: Hospital Plays Song Throughout Building For Every Baby Born