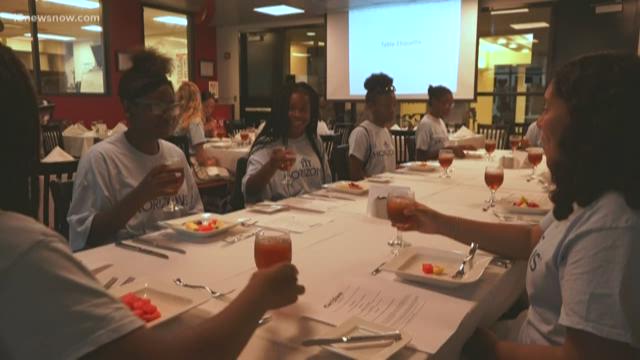 VIRGINIA BEACH, Va. — The young people smiled as they clinked glasses and set their eyes on the food coming from the kitchen.

On Friday, Crystal Jones, a chef at the Art Institute of Virginia Beach treated a group of eighth-graders to something special.

She and a group of her culinary students gave the middle schoolers a surprise lunch at the CrAive Restaurant inside of the Art Institute.

As she welcomed them, Jones made sure everyone was comfortable and she promised them a good time. Jones taught the students a valuable lesson during an etiquette class.

Behind the scenes, culinary students prepared a three-course meal for them.

It was a surprise for students like Cliff James.

“I didn't know we were actually gonna eat food,” he said.

He smiled from ear to ear as a server place a plate of breaded shrimp and french fries in front of him.

The etiquette class was Jones’ way of helping the students prepare for adulthood.

“These students are bright students. They come from wonderful families that work really hard, and sometimes you just need that extra help,” said Jones.

“It’s important to learn how to eat properly because you never know when you’re gonna be in a situation where you’re gonna have a lunch meeting. Learning these things early can help you obtain a job.”

Beyond that, she wanted to introduce the students to a potential career path in the culinary world.

The Horizons program and different activities are helping students like Cliff James prepare for a bright future.

“It’s keeping us away from bad things during the summer, and we're also maintaining intelligence,” Cliff said.

The summer program is a safe place for the teen. He said without it, he fears he would end up in trouble.

“I don't have a nice neighborhood, I don't really like my neighborhood. So maybe I’m outside and something’s happening down the street, and I don’t really know about it, and I could get caught up in it,” he said. “I live right next to a drug apartment and there were three drug busts [last year].”

That's why Chef Crystal wanted to reach out and partner with the Horizons program. She grew up in a low-income family just like them.

Years ago, she decided she wanted to be a chef during an etiquette class just like the one she held for the students on Friday.

“Even if it’s just one student, that could've been me,” said Jones. “It was me, so maybe we were able to reach one person and give them a different idea of what their career might be later on.”