Dealing with Loss: how the pandemic prevented people from properly mourning lost loved ones

Two different families share their stories of the one thing they have in common: not being able to properly say goodbye to loved ones they lost during the pandemic. 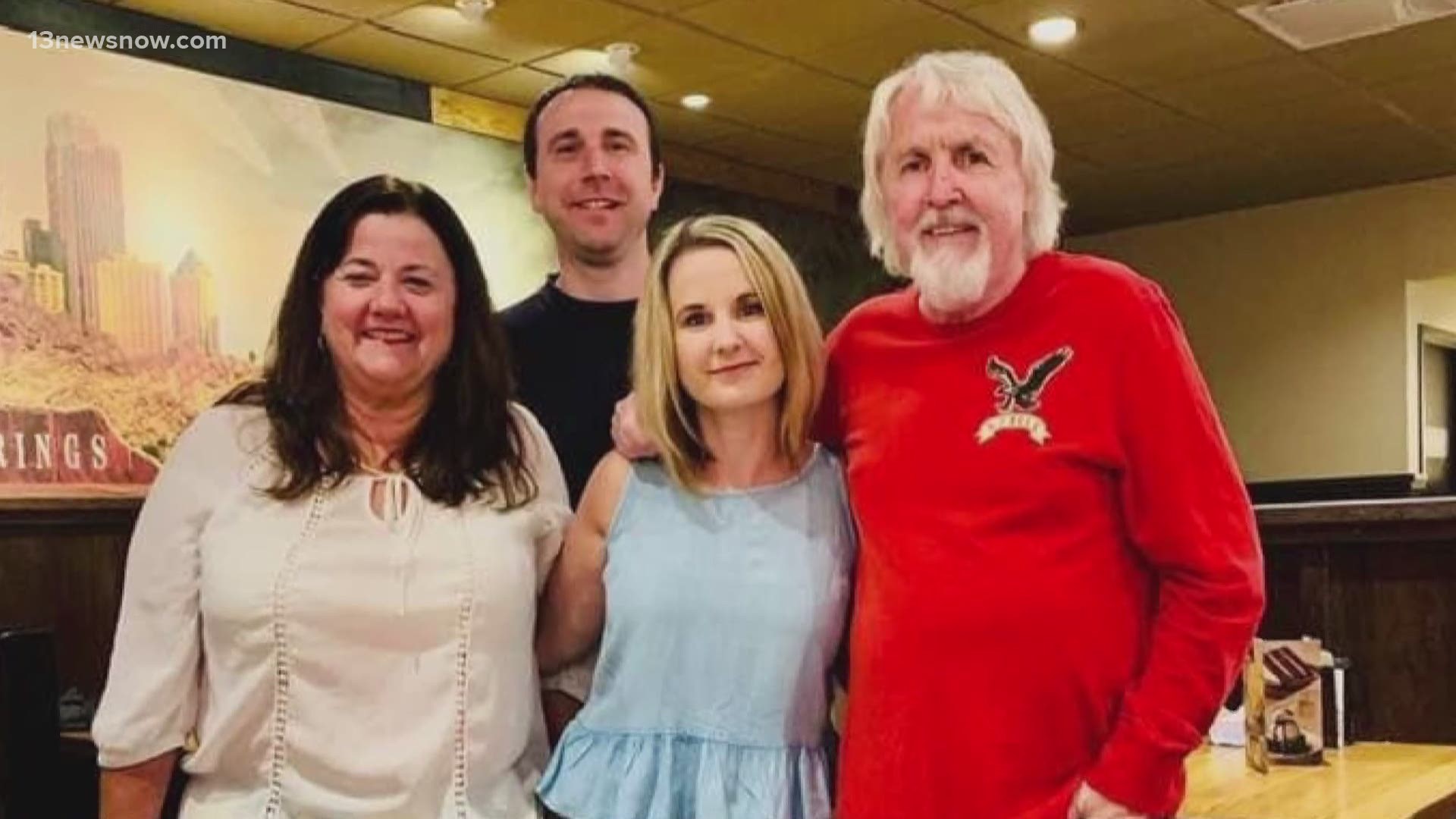 VIRGINIA BEACH, Va. — Saying goodbye to a loved one who passed away is never easy, but imagine never being able to have the proper goodbye. That is what so many people across our nation and here in Hampton Roads are struggling with to this day after the pandemic prevented many from being able to mourn.

Rick Baker spends most of his time in his backyard in Chesapeake tending to his garden. He says it brings him a sense of peace following his heart-wrenching time right as the pandemic shut everything down.

Baker lost both his parents just about a month apart. His father, Ralph Baker, passed away in February 2020. Then, his mother Constance passed away in March.

“She was doing well and it was just a sudden cardiac arrest... it was sudden. That one was not expected," Baker said as he sat in his backyard furniture, looking out at his yard.

They lived in Massachusetts, which made it all the more difficult for Baker to travel there and be with family. Now more than a year later, Baker says they still haven’t held a proper memorial service. He says it wasn’t worth the risk of COVID-19.

“I felt kind of guilty about it, but I know my parents would understand the situation... and then I felt guilty about feeling guilty because... it’s not about me, it’s about them," Baker explained. "I’m not going to risk other people passing away due to COVID to finish this. We’re going to do it. If not now, it’s going to be probably September or October before we do something like that.”

The Bodner family is in a similar situation. Carol Bodner video chats every day with her husband, Jim, who has been in the hospital with COVID-19 for the past three months. She says it can feel lonely. Jim's daughter Sarah, and her son James, also video chat to keep up with their dad.

Jim grew up with his older brother, Johnny, who was also in the hospital months ago with COVID-19. So when the nurses saw Johnny fading away, they called Jim on Facetime to say goodbye from their hospital beds. Johnny even sang to his brother to help him feel at ease.

"I'm happy my dad got to see [Johnny] because he really wanted to see him in person, but the nurse made it possible to see him in Facetime," Jim's son, James, explained.

Through a Zoom call, Jim spoke from his hospital bed, describing the moment he said goodbye to his brother, saying, “I just talked to him, consoled him, and prayed with him. Then he passed right on the phone.”

However, with Jim still in the hospital, Carol Bodner says they have yet to hold a funeral service for Johnny and be close with the rest of their family.

“We’ve paid for the whole funeral. We’re just waiting to be able to do it,” Carol explained.

It’s prevented them from getting closure. For Rick Baker, he says not being able to properly say goodbye left him in limbo as well but he's focusing on small tasks helps him cope.

“I just focused on my yard and my garden," Baker said. "My dad loved to garden, so I just try to focus on spending my time doing home improvements and working around my house to keep myself occupied.”

For the Bodners, their coping strategy goes beyond their backyard. Carol said, “The thing that’s gotten us through it is prayer because if you trust and you pray, then it’s going to get you through it and things are going to get better.”

Both families hope they can soon close this chapter in their lives and finally say goodbye.

There are grief counseling and support groups offered in areas across Hampton roads. Here are some resources: