'I just need an opportunity': Laid-off dad passes out resumes on street in North Carolina

At first glance, you might not give Michael Bridges a second look -- just another person standing on a Charlotte street corner holding a sign. 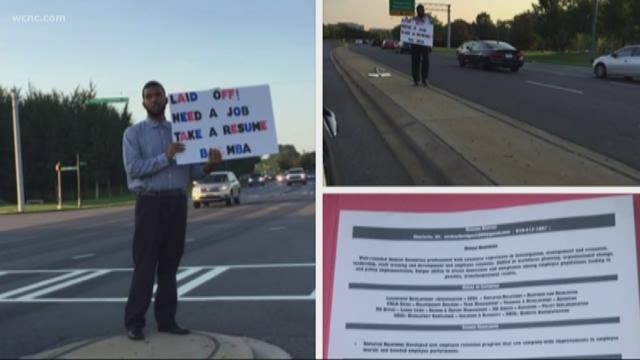 What would you do if you lost your job?

It's something no one wants to think about, but one Charlotte man had no choice.

When his company laid him off, Michael Bridges didn't just print off a bunch of resumes. He took to the streets to hand them out.

At first glance, you might not give him a second look -- just another person standing on a Charlotte street corner holding a sign.

"I do human resources management, but right now, I'm open to anything. I just need an opportunity," he said.

Bridges has qualifications and experience.

"I never thought having a masters degree would put me out here," he said.

When the firm he worked for lost their sole contract a few months ago, Bridges said he lost his job.

"I put my pride to the side. It's my second day out here hoping to get someone's attention," he said.

He's getting it. People have already posted Bridges' picture on social media, and the comments are pouring in.

Back on the corner, Bridges happily hands out his resume to anyone who will take one.

"I did what America told me to do. I went to school and got my degrees, and I can't find a job," he said.

Bridges said he's applied for many jobs but just hasn't scored one yet.

"I've applied to the city the county, sent off a lot of resumes, but unfortunately I haven't had any luck," he said.

Bridges said hitting the street is his way of being proactive, and all he needs is just a sprig of hope.

"I'll stay out here until I find a job. I just need somebody to give me an opportunity. I had 75 resumes, and I'm down to my four, so I need just one person to give me a chance," he said.

15 apps parents should look out for on their kids' phones