January 15 marked 11 years since the Miracle on the Hudson. Wednesday, Captain Chesley "Sully" Sullenberger shared what he learned from the flight and what followed. 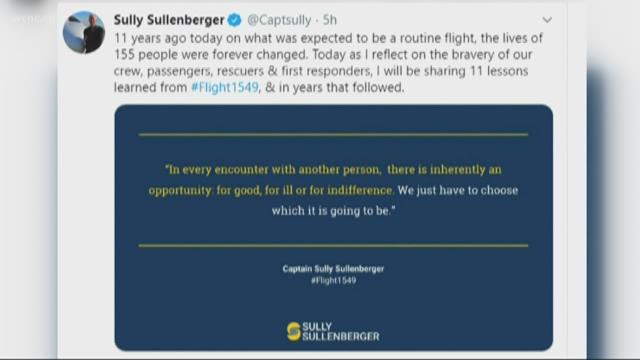 Eleven years ago on January 15, Flight 1549 bound for Charlotte made a crash landing into the icy Hudson River.

Shortly after takeoff, the jet's engines were taken out by a flock of geese. Captain Chesley "Sully" Sullenberger pulled off a landing hailed among the greatest feats in aviation history, guiding the plane to a safe landing on the icy Hudson River.

Miraculously, all 155 people on board survived.

Wednesday morning, in honor of the 11th anniversary, Sully posted a tweet saying he would share 11 lessons he learned from that flight and in the aftermath.

WCNC has spoken with a number of passengers on board the famed flight. Many of them have said surviving gave them a second chance at life.

The passengers onboard Flight 1549 share a bond that has made them like family. Last July, several passengers gathered at the Carolinas Aviation Museum before the famed U.S. Airways aircraft from Flight 1549 was tucked away in storage.

RELATED: 'Miracle on the Hudson' moved to storage

RELATED: 'I knew I had to say goodbye' | Miracle on the Hudson passengers reflect as Carolinas Aviation Museum closes

RELATED: 'Brace for impact:' Remembering the Miracle on the Hudson