Officials with Virginia Beach Animal Control said they issued citations for owners who had their four-legged friends on the beach. 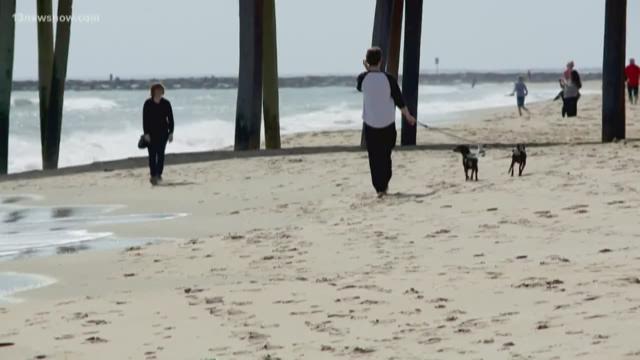 This heatwave is not only hard on you, but also your pets.

Over the weekend, officials with Virginia Beach Animal Control said they issued citations for owners who had their four-legged friends on the beach.

“We’ve seen burns on the paws, from them just walking too long outside and it’s to the point where their paw pads will actually slide off,” explained Blue Pearl Emergency Veterinarian, Kaitlin Knaszak.

13News Now Reporter Ali Weatherton used a heat gun to show how hot the ground was at the Virginia Beach Boardwalk. The pavement around 2 p.m. on Monday was 141 degrees. The sand was 145 degrees!

Knaszak said during this heatwave, dogs shouldn’t be outside for long periods of time. You should take them out early in the morning or after the sun has set.

She said, “Within the past week we’ve seen about ten dogs cases of heatstroke.”

Unfortunately, a few dogs passed away. Knaszak said some breeds are actually more prone to getting sick.

“Pugs, bulldogs ... those types of breeds because all of their tight face and they don’t have a long snout and they are at a higher risk because their ability to breathe is difficult because of their genetics,” Knaszak explained.

If anyone takes their dog outside and they start excessively panting, she said it’s important to bring them inside immediately.

“The biggest number one tip I can give you to cool them down is not using ice water,” she said. “Ice water can actually lead them into going into shock so using cool water is going to be essential in these cases.”

It’s crucial if your dog is not acting like themselves, to take them to a vet immediately. Knaszak said the more you wait, the worse it could get.