The Brownlow brothers were all diagnosed with autism at an early age. Their parents reveal the challenges of everyday life. 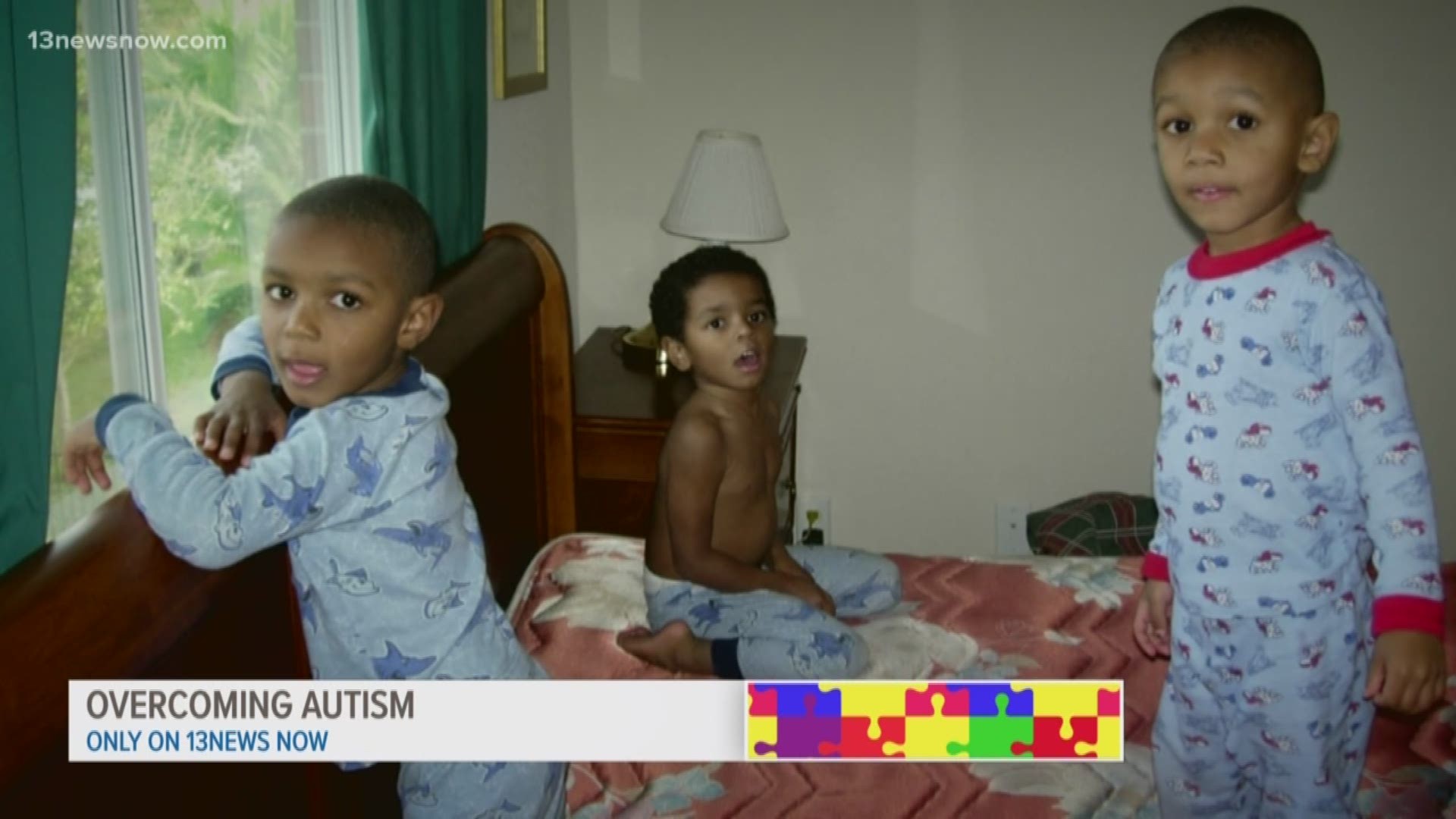 VIRGINIA BEACH, Va. — Through the doors of a therapy room at Sentara Therapy Center Pediatrics Newtown, three brothers work hard to learn the basic skills to get them through everyday life.

Every week, their speech pathologist, James Thoms, has a plan for his session with the Brownlow brothers. Flashcards: a fun game or two to help their communication skills.

If one of them is having a bad day, Thoms has difficulty getting them to participate in a game and has to readjust.

All three of the brothers have autism.

21-year-old Jonathan, 19-year-old Isreal, and 18-year-old Nicholas were all diagnosed at an early age.

“We’ve had our moments. There’s been some times where we’ve had moments in this room. But it’s like the family dynamics, it just builds up the relationship,” said Thoms.

The Brownlow brothers have been seeing Thoms for more than 10 years. The four of them have formed a close bond. They celebrate milestones together, and the brothers even invite Thoms to their birthday parties at home.

“I’m a better person for knowing them, cause it’s not easy, but with the way they’ve come, and with their parents’ help, it’s become much easier.

“As far as I’m concerned, they’re in my life, I’m in their lives forever. As a therapist or as a friend, it’s not gonna change,” said Thoms.

Their connection has allowed the three brothers to manage living with the developmental disorder.

Jonathan likes organizing and finds comfort in cutting paper into equally-sized pieces. Isreal is computer-savvy and loves Disney characters. Nicholas is the most verbal of the three. Of all brothers, Nicholas is able to put together three-four word sentences. Jonathan can speak a word or two at a time, and all three of the brothers have learned to communicated using motions.

“You can never put a cap on a child’s potential. Especially a child with autism, and sometimes we do,” said Thoms.

They’ve come a long way from their very first visit. The skills they learn during therapy carry over to their school and home.

Their parents, Isreal and Ginger, have learned the key to their success is giving their sons tasks and boosting their confidence.

They have their highs and they have their lows, a reality that has been a challenge for the parents since three of their five children were diagnosed with the developmental disease.

“I always believed that doing good and being a good person brought good things. In my opinion, autism was not a good thing. It was, 'What’s wrong with my kids? Why aren’t they speaking? Why aren’t they talking? What did I do wrong?' You know, 'Why me?'” said Ginger.

Ginger said they’ve had their share of traumatic experiences: being ridiculed out in public, having one of them run away at one point, and medical emergencies. It’s a lot to handle for two parents trying to raise a happy family.

“I have not been able to relax and breathe in probably 18 years. There is no breath. It’s just my life,” said Ginger. “We just wanna feel normal. When you have autistic children, you don’t feel normal. You feel like you did something wrong.”

“At first we couldn’t understand why. Not just one boy, but three. So, we just started trying to figure out what to do as parents,” said Isreal.

That meant getting their boys the help they need to thrive. In addition to going to therapy with Thoms once a week, the boys each have a therapist work with them in the home every day after school.

The therapists help them manage everyday chores around the house.

Jonathan has even developed a love for cooking.

Despite the daily challenges, these dedicated parents take each day as it comes and they shower their children with love. Through encouragement, smiles, and plenty of hugs, they let their boys know that even if the outside world is intimidating, at home, they’re safe and embraced for who they are.

Ginger and Isreal hope sharing their challenges as parents will help raise awareness about autism.