Minimum wage is increasing for Virginians, but not farm workers. There's a push to change that. 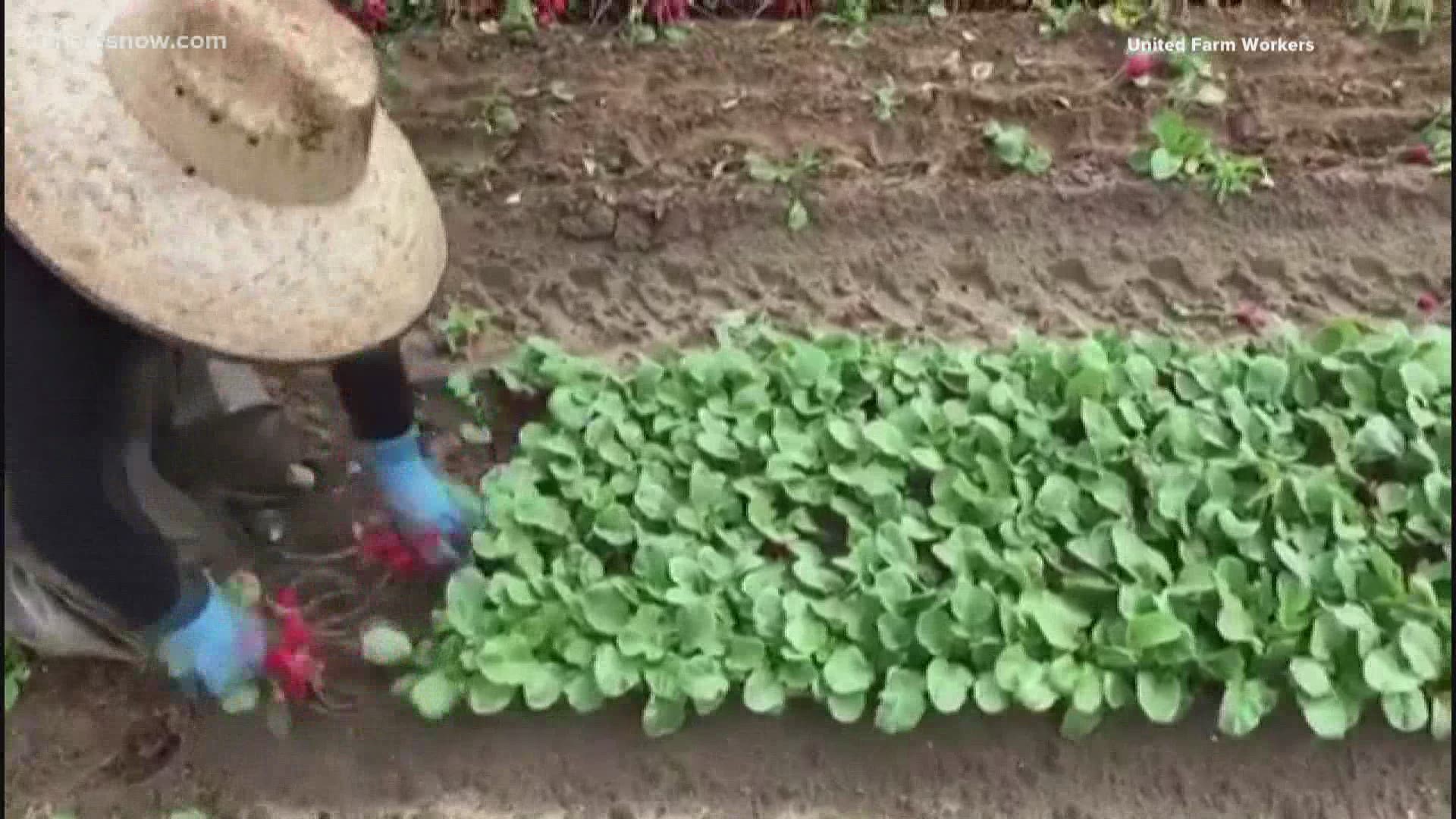 VIRGINIA, USA — They’ve toiled away in fields throughout our nation’s history.

Often times, farmhands endure up to 15-hour days during harsh winters and brutal summer heat, and they've continued working hard in the fields through the entire span of the pandemic.

Many of these migrant workers come to the U.S. through the H-2A temporary agricultural workers program, or H-2A visa program.

They move from place to place and follow the harvest, making sure food gets to your dinner table.

A migrant farm worker who lives on Virginia’s Eastern Shore puts in those intense hours. In an interview with 13News Now, she asked us not to share her identity, out of fear she’d lose her job.

“It’s tough work, especially for us women," she said. "We carry out a huge job here, we have a responsibility to keep food on the table."

Throughout her years on the Eastern Shore, she has picked tomatoes during hot summer days. The woman told us she gets paid on a piece-rate system, a form of pay based on production.

Her earning are based solely upon how many tomatoes she picks. She said her bucket, at times, brings home $200 a week.

It’s not enough for her to support her four children.

Virginia is increasing the minimum wage every year until it reaches $15 an hour by 2026.

But, the legislation excludes farm workers.

“That new law left behind some of the hardest working, essential men and women in the Commonwealth. I'm talking about those farm workers,” Ward said during a Jan. 28 meeting.

Jason Yarashes, lead lawyer with the Legal Aid Justice Center, said farm workers in Virginia and across the country have faced a series of historic injustices.

“It’s not fair that farmworkers are doing this difficult essential work and they’re left behind. The fact that it’s difficult for farm workers to put foods on their own family’s plates, when they’re putting food on everybody’s plate throughout Virginia and everywhere else... people should just take a step back and think about what that means.”

Yarashes said he represents clients throughout the Hampton Roads and Eastern Shore regions. He said one of his clients is paid $6 dollars an hour, works 12 hour days, and gets a 30-minute unpaid lunch break.

“That is completely legal under Virginia law,” said Yarashes.

Thankful for Del. @JeionWard for carrying this critical bill again, & to partners @TCIFiscal & @vainterfaith & others for continuing this fight along with us to honor our Virginia farmworkers w/not just gratitude & thanks, but with the wage protections they deserve. https://t.co/fwyqEKWecW

The coronavirus pandemic brought farm workers' hardships to the forefront of the political spotlight.

According to the National Center for Farmworker Health, harsh working conditions on farms and meat-packing facilities have led to COVID-19 outbreaks in rural areas across the country.

Virginia is among 11 states that have implemented farmworker protections against COVID-19.

For many of these workers, it's their living conditions that put them at risk.

They get free housing, but often live in close quarters in "migrant housing." There are many such setups throughout the Eastern Shore.

Yarashes said often times, 15 people share a bathroom and 10 share a stove at the migrant camps. Air conditioning isn’t required in the units, even during Virginia’s hot summers.

Nuri Santos, who lives in Cape Charles, lived in migrant housing with her husband when she and her children first came to the U.S.

Santos has worked in the fields as a nursery worker. She said she made and sold tamales to make ends meet during that time.

Now, she’s embedded in the community. Santos cleans houses and provides food, transportation and other forms of assistance to other members of the migrant community.

Santos and her husband moved out of the housing camp and into their own home.

“We’re part of the working class, but we have dreams too," she said. "Dreams that our kids will graduate from the university, our kids are the future - but what we get paid just isn’t enough."

While HB 1786 passed in the House of Delegates, many lawmakers voiced strong opposition to the idea of including farmers in the minimum wage increase.

Jim Riddell, a member of the Virginia Cattlemen's Association, is among them.

“Our small farms this year and last year are struggling,” said Riddell. “We believe this bill would put more farms out of business and would cause more unemployment.”

“Even on the level of minimum wage, that does not mean an employer can’t utilize a piece-rate system to incentivize workers, they can still do this under this framework,” said Yarashes. “They just have to pay the minimum wage to folks who are doing the most difficult work in Virginia.”

As the fate of these farm workers is debated, they’ll keep at their jobs, sowing seeds of hope that this year, things will get better for them.

HB 1786 was referred to the Committee on Commerce and Labor in the Virginia Senate on Feb. 3.