About 2.4 million Americans have some kind of opioid-use disorder, including prescription drug abusers of OxyContin and Vicodin and illicit users of heroin and fentanyl. 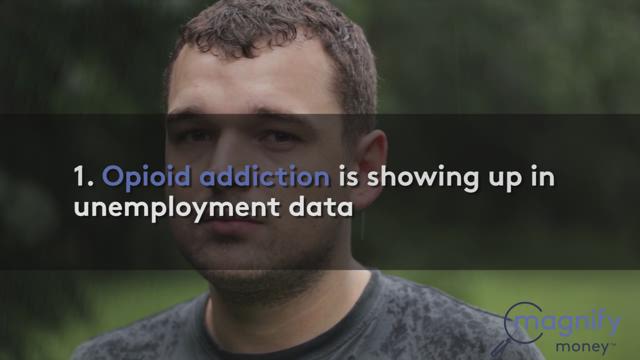 When President Donald Trump gave a major policy speech on the opioids epidemic this week, he chose to deliver it in New Hampshire, a state where the rate of overdose deaths ranks among the worst in the nation. But the latest data from the Centers for Disease Control and Prevention shows Trump could have picked many places across the nation to demonstrate just how fast the epidemic is spreading.

On March 6, the CDC released data showing incredible spikes in opioid-related emergency room visits since July 2016: in Wisconsin, they were up 109 percent; in Illinois, up 66 percent; Delaware, 105 percent, Pennsylvania, 81 percent.

These are just some of the devastating numbers behind the growing health crisis. The CDC says 64,000 people died from drug overdose in 2016, roughly three-quarters from opioids alone. That rate has risen fivefold since 1999. For comparison, about 37,000 Americans died in automobile accidents in 2016 and 58,000 died during the entire Vietnam war.

About 2.4 million Americans have some kind of opioid-use disorder, including prescription drug abusers of OxyContin and Vicodin and illicit users of heroin and fentanyl. A recent Trump administration report found that when the various costs are piled up - with treatment, lost productivity, judicial procedures - the annual price tag is an estimated $500 billion.

Understanding the depth of the crisis, and its widespread cost, is critical to attracting the focus it will need to repel it.

Here, we take a deeper look at some of the economics of opioids.

1. Opioid addiction is so prevalent, it shows up in unemployment data. Economists have been struggling to understand the stubbornly low workforce participation rate, particularly among men, for some time. An aging population and other demographic factors explains a lot of the trend, but that explanation seemed incomplete. Princeton's Alan Krueger filled in the blanks by examining county-level opioid prescription rates and labor participation rates, and discovered that higher prescription rates correlated with higher dropout rates. He estimated that about 20% of the reduced rate among men ages 25-54 can be blamed on opioid use. His research also found that two-thirds of prime-age men who aren't working take prescription pain medication on a daily basis.

Federal Reserve researchers have found that at least some employers are struggling to find workers because potential employees can't complete drug screening programs.

"I do think it is related to declining labor force participation among prime-age workers," she said. "I don't know if it's causal or if it's a symptom of long-running economic maladies that have affected these communities and particularly affected workers who have seen their job opportunities decline," she said.

2. It does seem intertwined with an economic opportunity problem, however. The Federal Reserve Bank of Boston found that the 20 New England counties that had the highest overdose mortality rates have several economic characteristics in common - poverty, disability and unemployment rates that exceed New England averages. These areas also have seen above-average declines in manufacturing and manual-labor occupations since 1970. Meanwhile, a paper by the National Bureau of Economic Research published last year found a pretty dramatic correlation between unemployment and drug abuse: For every single percentage point increase in county unemployment rate, the opioid death rate rises 3.6% per 100,000, and the opioid overdose emergency room visit rate increases by 7.0%.

3. Individual expense for dealing with opioid addiction is skyrocketing. One of the more depressing economic facts you'll find about opioids: The street price of heroin can be less than the cost of a pack of cigarettes in some places. Meanwhile, curing addiction is costly. The Trump administration report calculated that "total nonfatal cost" of fighting addiction among prescription opioid abusers is about $30,000 per patient. Individual costs are rising fast. Between 2009 and 2015, the average cost of an opioid admission increased from $58,500 to $92,400, according to a study of 162 academic hospitals led by Beth Israel Deaconess Medical Center in Boston. Why? Patients are arriving in worse condition, and require longer stays, the authors speculate.

That includes cost of long-term care, opportunity cost, emergency room visits and many other factors. Those costs include about 45,000 emergency-room visits for opioid patients in 2017, and costs associated with making naloxone, an antidote for overdoses, available.

5. Public money (i.e., you) is paying for most of this. A 2016 report published in the Medical Care journal authored by experts from the National Center for Injury Prevention and Control, estimated that one-fourth of the costs from the opioid crisis are paid for by public sources like Medicare and Medicaid. That might understate the cost, however. Krueger, exploring the problem of labor force participation, found that two-thirds of men not in the labor force and taking pain medication used programs like Medicaid and Medicare to buy their prescription opioids for daily use. And there are plenty of hidden costs. As just one example: There are an estimated $7.7 billion in criminal justice-related costs to opioids, pushing addicts through the court systems and into incarceration. Nearly all of the costs are born by state and local governments; that's funds which can't be spent on schools or roads or parks.

How to find help

Start with your insurer. If you or a loved one is suffering from an opioid addiction, there are plenty of ways to get help. For starters, the Affordable Care Act (Obamacare) forced health insurers to cover substance abuse and addiction treatment the same as other treatments, through a concept known as "parity." Combined with the expansion of Medicaid, and removal of the pre-existing condition rules, the ACA made addiction treatment coverage newly available to millions of Americans.

Private plans must cover addiction treatment as other diseases, too. Coverage amounts and deductibles can vary, but some plans will cover all or most of the cost.

Choose your treatment center carefully. Patients need to choose carefully, however. There are 14,500 addiction treatment centers, according to The National Institute on Drug Abuse. Not all of them are covered equally, or by every insurance plan.

Some addiction treatment centers have been criticized for putting profits above treatment, using brokers to find would-be patients with the most generous benefits - and sometimes, committing fraud to insure patients.

Medications can help. Some medications, such as methadone, buprenorphine and naltrexone, have been found to help wean patients off their addiction. These drugs are only covered under certain circumstances, however. Meanwhile, fewer than half of private-sector treatment programs offer medications for opioid use disorders, according to the National Institute on Drug Abuse.

Family members concerned about loved ones should know about naloxone, the life-saving drug that can reverse the potentially deadly impacts of an overdose long enough to get a patient to the hospital. In some states, it can be obtained without a prescription. A new nasal spray called Narcan® is now also available. Use this site to find a location where naloxone can be obtained. Have access to this before an overdose occurs; there may not be time during an incident.

Ask for help. Family members and those in need of treatment can learn more at Substance Abuse and Mental Health Services Administration, which has a 24-hour hotline at 1-800-662-HELP (4357), or at their website at http://www.samhsa.gov/find-help

The National Council on Alcoholism and Drug Dependence and has a 24-hour hotline at 1-800-622-2255, and information is always available at http://www.ncadd.org/.