So there I was all decked out as a boatswain's mate onboard the USS George Washington working with the deck department doing stores. 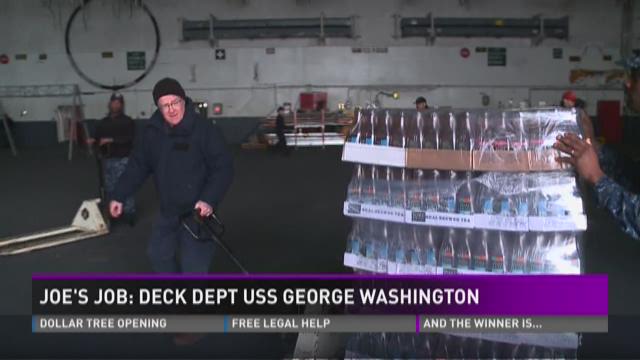 NORFOLK, Va. (WVEC) -- So there I was all decked out as a boatswain's mate onboard the USS George Washington working with the deck department doing stores. That's the term for bringing onboard the food, stuffs and supplies that sustain this massive aircraft carrier.

"Obviously we have to get the food on the ship somehow. Which entails us being outside working on the pier. And most times that is early morning and it is cold," said SN Dylan Stacy.

This series during February is all about cold jobs. You can bet there are some cold jobs on a ship and we heard one from 25 year boatswain's mate Stephen Nordan.

"I remember once going up the Portland River to the Rose Festival and it was pretty brisk at 20 degrees up there and we had an 8 hour sea and anchor duty. So we were outside in that kind of weather for quite a while," he said.

In the end I was in charge of hauling a 700-pound load of Gatorade across the hangar bay to the fantail of the GW.

Fortunately I had cs Jordan Young pushing while I pulled. When we finished we were at the place where sailors formed a long line and tossed our cases down the line to storage; and it was cold out on the deck too.

"I love to wear my mock turtle neck, sometimes it gets a little too cold out here but it is never as cold here as it is in my hometown of Detroit," said SNSS Eric Coulter.

We say thank you to all of you for your service. Great job!