BBC dad: 'I made this minor mistake that turned my family into YouTube stars'

The professor whose interview with the BBC was interrupted by his two young children said he was initially embarrassed but later found humor in a situation many parents can relate to. 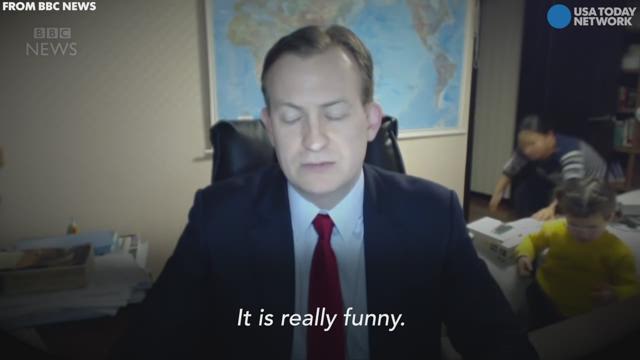 The professor whose interview with the BBC was interrupted by his two young children said he was initially embarrassed but later found humor in a situation many parents can relate to.

Robert E. Kelly and his wife, Kim Jung-A spoke to the Wall Street Journal Tuesday about the onslaught of phone calls and interview requests they’ve received since the interview aired.

Kelly, who is a political science professor at Pusan National University in South Korea, was explaining the ramifications of the impeachment of South Korea President Park Geun-hye live on the BBC when his two young children made their on-air debut.

"She was in a hippity-hoppity mood that day because of the school party," he told the Journal.

She was followed by his young son and finally his wife, Kim Jung-A who sped into the room like a superhero and grabbed the children. 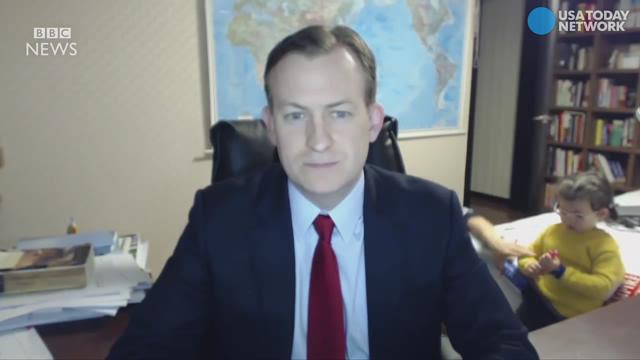 In another interview with BBC World News, Kelly said his wife wasn’t aware the children were in his home-office until she saw them on TV.

“She was videotaping the interview so we could have a clip of it, and the kids sort of escaped and I had foolishly not locked the door,” Kelly said in a follow-up interview with the BBC. “It’s really all my fault for not locking the door.”

Kelly said he was able to see his daughter as soon as she walked into the door in the camera, so he tried to gently push her behind the chair and was hoping that she would sit down and read a book or play with a toy.

“Once my son came in the roller, there was nothing I could do,” he said. I was just hoping you guys would cut it on your end and I was keeping a straight face.”

BBC asked what the couple thought of the assumption that many had that Kim Jung-A was the nanny and not the children’s mother.

“We were pretty uncomfortable with it,” Kelly said.

Kim Jung-A said she hoped people could just enjoy the video and reiterated: “I’m not a nanny.”

The family said they're still taking in their new found fame.

"I made this minor mistake that turned my family into YouTube stars," Kelly told the Wall Street Journal. "It's pretty ridiculous."