Harnessing the power of social media to find lost pets. 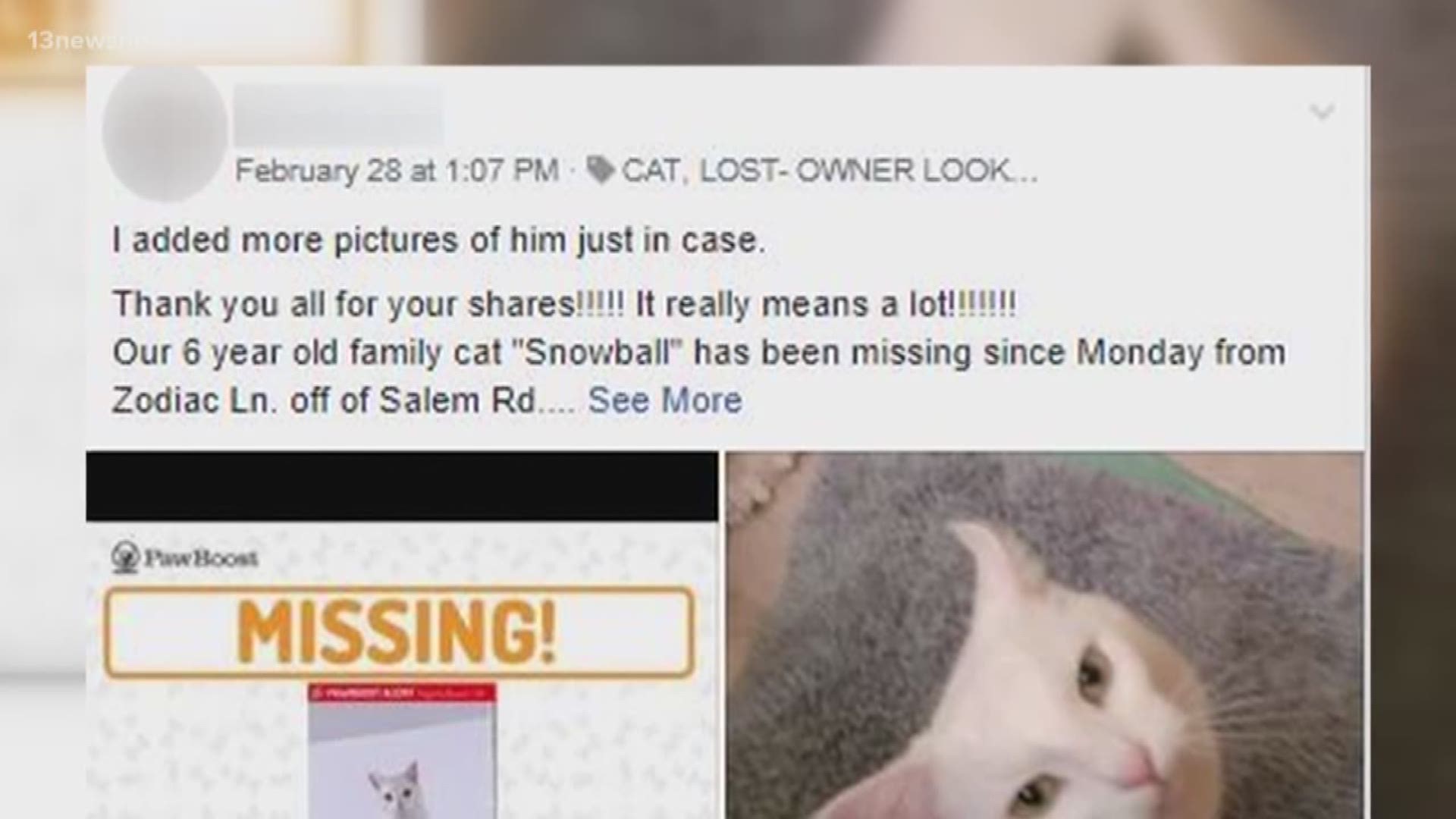 NORFOLK, Va. — Social media has its highs and its lows, but there is one thing that it is great at and that is finding things. In particular: lost pets.

If you’ve ever had a pet go missing, you know all too well the pain and agony of not knowing if you’ll see them again. Back before the days of interconnectivity, you’d post fliers and walk the neighborhoods hoping for the best. Today you can harness the power of social media and significantly increase your odds of seeing them again.

Gina Highfield is spearheading the race to find your pet on social media and is the administrator of the Facebook group Lost & Found Pets Hampton Roads.

“We have almost 32,000 members so when a pet is posted -- whether it is lost or found -- there are 32,000 people that are sharing, sharing, sharing. It could be shared a million times before the day is over,” said Gina.

So what do you do if your animal gets out? Grab a recent picture and head to social media and get to posting. Gina also said that if your pet goes missing, go in person to the local shelters to see if your pet was already picked up. Calling is usually not enough since shelters are so busy your pet could get lost in the shuffle.

Now, what about if you find a roaming animal?

According to Gina,“The first thing people should do when they find a pet is to notify the shelter in the city that the pet was found. Most require that within 48 hours you report that a pet is found.”

This way the shelters can scan the pets for a microchip and reunite owners and pets that same day.

What Gina does along with her group members is that they post updates, following along with each missing animal as they find their way home. It’s this attention to detail and care that sets Gina and her page apart.

“I try to go through my page pretty much all day long. If I see an update, I’ll go in and edit and put it as reunited, [and] close comments. That way people know that this pet is a done deal, reunited. That way we can focus on the ones still missing,” she said.

This is a full-time job for Gina and the page's other admin Sherry, but they do it for the love of animals. Gina said the reward of the joyful reunions makes the long hours worth it.

“People don’t understand that it is usually myself and my other admin, Sherry. We are on the website all day long. Every five minutes I am on my phone checking to see if there is another pet posting that needs to go on the page.”

Not to mention that Gina works full-time and has a family to tend to as well! Gina and her members go the extra mile and most times for people and animals they’ve never even met.

One thing is for sure, if your pet, unfortunately, does go missing you can rest a little easier knowing that Gina and her gang are doing everything they can to help find them.

Gina wasn’t done there. She has recently started a non-profit to help those in need to help to pay for their animals' surgeries. So far they’ve helped over 100 pets and covered over 7,000 in medical costs.