"This is the worst thing that could ever be done to our city," one councilman said at the Monday night public hearing forum. 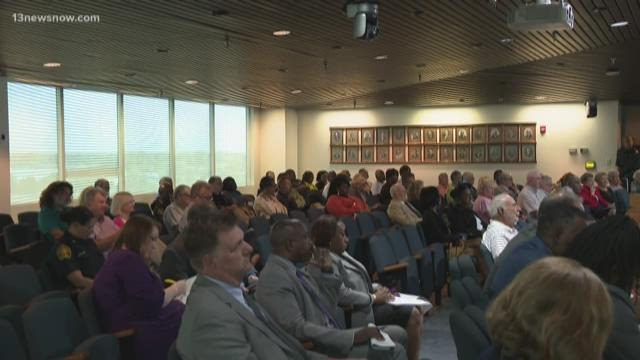 PORTSMOUTH, Va. — The City of Portsmouth held a public hearing Monday night to gather the public's thoughts on the preliminary design concepts for a new city hall with a parking garage and separate public safety building.

Two weeks ago, city leaders delayed a vote on whether or not to commit nearly half a million dollars to developer Armada Hoffler for detailed design plans for the project.

The city would have to pay the $475,000 to Armada Hoffler should it back out of the public-private partnership deal.

When things got heated at the city council workshop over the matter in late August, city leaders decided the taxpayers should be involved. So, they scheduled a public hearing for September 9 at City Hall.

Monday night, dozens turned out to make their voices heard.

"I hope you all will listen carefully to what I say," one man told councilmembers and other city leaders.

Some citizens lashed out against the idea of committing so much money to the developer.

"The deal sucks and the citizens do not want it," another woman said.

Councilman Paul Battle, much like two weeks ago, stood firm against the idea.

"This is the worst thing that could ever be done to our city," he said. "We need to relax and enjoy the success that we've had as a city."

Others were on board with the idea of doing something but agreed that the current proposal was far from perfect. A recurring issue was the potential location of the new city hall, just two blocks from where it is now.

"Let's think this thing through because I think it's great we're pulling these buildings off the waterfront because this is definitely not the highest and best use today," one man said.

The vote on the $475,000 commitment to Armada Hoffler is slated for Tuesday night at the city council meeting. How the vote may go is unclear, as the vice mayor and at least one councilman other than Battle have now voiced serious concerns over the deal after listening to the public.

As of now, the Armada Hoffler plan would turn the old city hall complex into waterfront apartments.