The trailers contained upwards of $20,000 worth of supplies. The Calvert County Sheriff's Office is currently investigating. 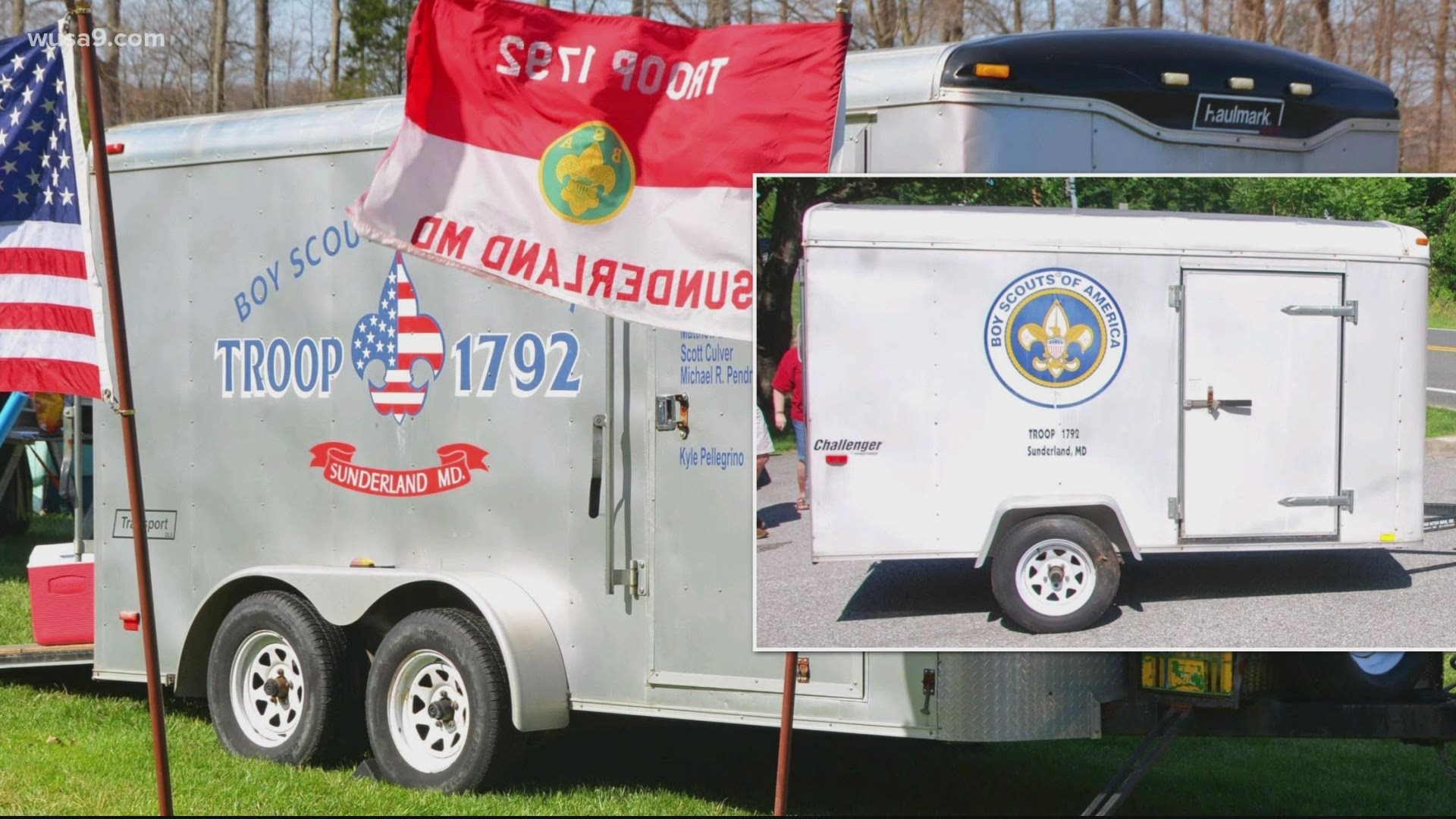 CALVERT COUNTY, Md. — Days before Christmas, a grinch has struck in Calvert County. A local boy scout troop said both of their trailers, which contain all of their supplies, were stolen in the last couple of days. Now, they're desperately working to recover the supplies they worked hard to amass over the last decade.

Troop 1792 in Sunderland, Maryland filed a police report for the stolen small and large trailers Tuesday morning with the Calvert County Sheriff's Office, which confirms it is investigating.

“I’m angry, but at the same time, very confused, like why?" Assistant Senior Patrol Leader, sophomore Adin Fitzgerald, said. "If we can’t get that back, then we have to buy all that stuff back and we have no materials anymore. We’ll have to start from scratch.”

The treasurer of his troop, David Hill, who discovered the theft, estimates the trailers and supplies, which they use for things like camping, total upwards of $20,000. He said they still have to price it out with insurance.

He said the trailers -- which are the type that one attaches to the back of a car -- were not locked to anything, but that's how they've sat at All Saints Episcopal Church for more than 10 years without incident.

“That’s a lesson learned," he said. "It’s something that we probably need to look at, but they were just sitting there at least since I joined in 2012, even before that. Never had any issues like that whatsoever, but go figure we’d have to worry about something like that, but we need to.”

Credit: David Hill
Two trailers were stolen from Boy Scout Troop 1792 in Calvert County in the last couple days, according to a troop leader.

Hill said he first noticed the small one was missing from the church's lot on Sunday, but assumed another scout leader had taken it. The next day, he saw that the big one was gone and realized they were stolen.

The Calvert County Sheriff's Office said one of the trailers was a 10-foot enclosed single axle and the second was a 15-foot dual axle trailer that were stolen from the parking lot of the church.

“Definitely a pit feeling in my stomach, because that's a lot of equipment, a lot of hard work that the boys have worked on through the years," Hill said.

Hill said his wife posted about the theft in different local Facebook groups and has received at least one response saying they had seen the larger trailer. So, he's hoping officers will be able to recover them.

He said the trailers contained supplies like their flags, cooking supplies, tents, truck boxes -- pretty much everything but their uniforms and scout books.

Fitzgerald, who is two stages away from becoming an Eagle Scout, said it also hit him hard to know that they lost a memento to previous Eagle Scouts who aged out of the group. He said their names were painted onto one of the trailers.

“I really hope that we have that trailer, because it still has our Eagle Scouts’ names on it, and I want that to be immortalized," he said.

In the meantime, the troop asks that if you spot the trailers or have any information, please contact DFC P. Wood at the Calvert County Sheriff’s Office at (410) 535-2800 ext. 2118 or paul.wood@calvertcountymd.gov.