The death of Elijah McClain: A timeline of events

Elijah McClain, 23, was placed in a chokehold by Aurora Police and died after he was given ketamine to sedate him. 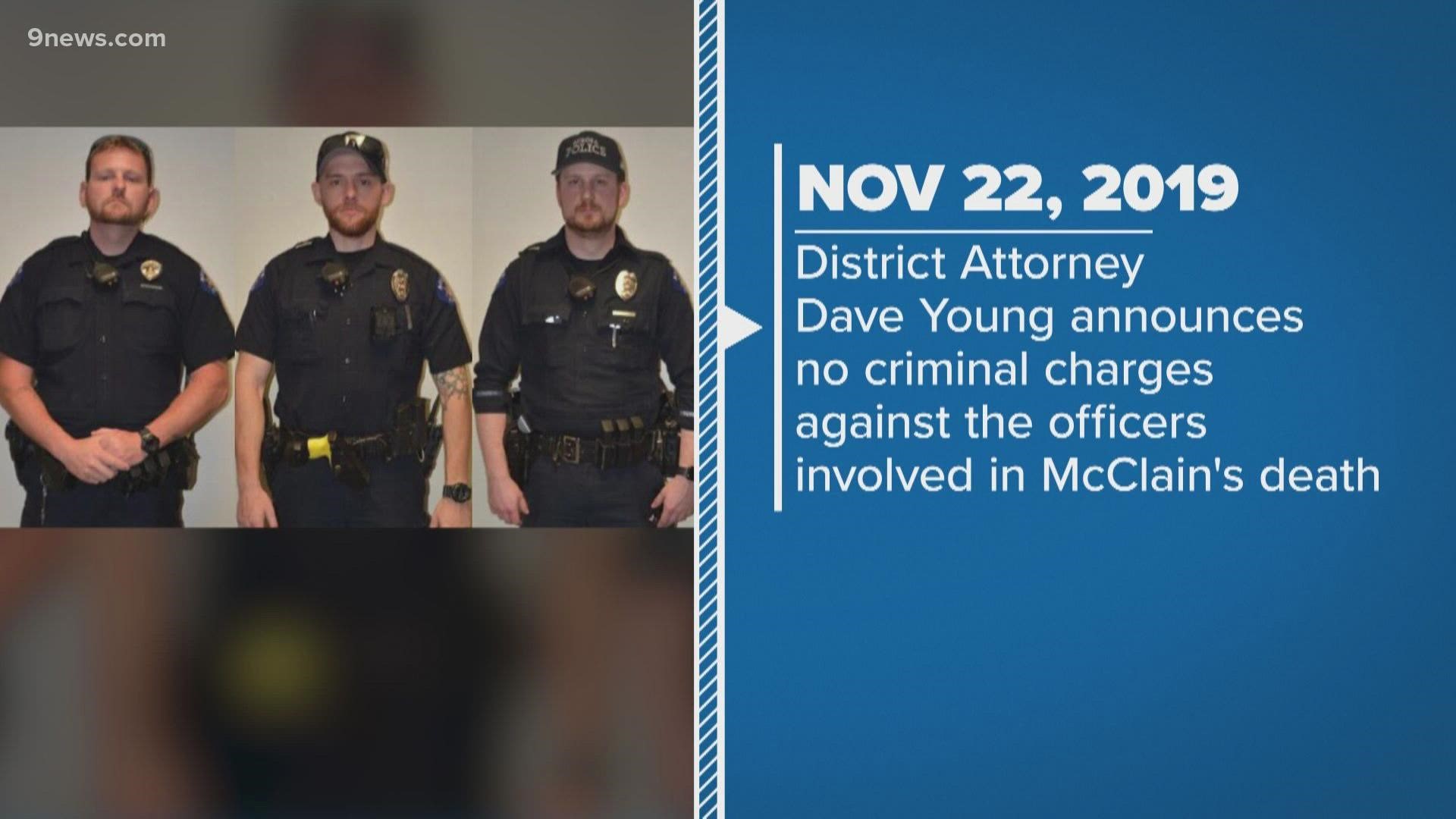 AURORA, Colo. — The August 2019 death of Elijah McClain made international news as Black Lives Matter protesters across the U.S. called for justice for the 23-year-old, who died of cardiac arrest after an encounter with the Aurora Police Department (APD).

The former District Attorney for the 17th Judicial District declined to charge any of the officers involved in McClain’s death, but the Colorado attorney general was appointed as a special prosecutor, and the FBI and Department of Justice (DOJ) are eying a federal civil rights investigation.

In late August 2021, a statewide Grand Jury returned a 32-count indictment against five people. They include:

The most serious charges include manslaughter and criminally negligent homicide.

Here's a look at all of 9NEWS’ coverage of McClain’s death, from the first story to where the investigation stands now. 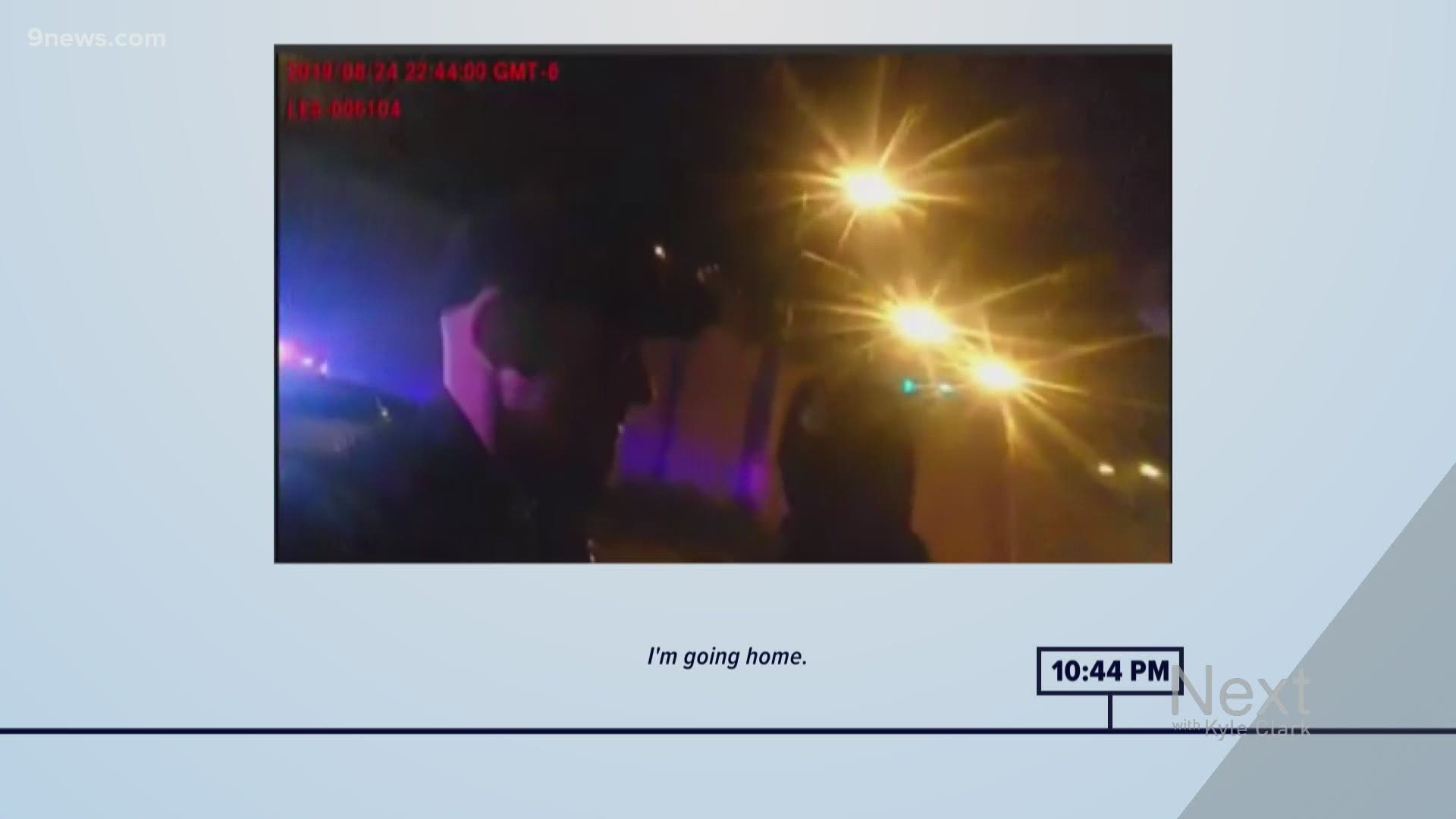 Just after 10:30 p.m., Aurora Police said officers were called to the area of Billings Street and East Colfax Avenue on a report of a "suspicious person."

McClain was wearing a face mask at the time – something his family said he did often when it was cold out because he was anemic. The 5'7" and 140 pound massage therapist had been walking to a nearby convenience store to pick up a drink. He had not committed a crime, and the initial 911 caller said he did not believe McClain was dangerous.

Body camera footage shows the confrontation quickly escalate from officers yelling "stop!" to McClain being thrown on the ground. One of the officers is heard shouting that McClain was reaching for his gun, but body camera footage doesn't definitively show him doing so.

Officers used a now-banned carotid hold (or chokehold) to keep McClain restrained. The District Attorney said McClain lost consciousness, but regained it and was heard in body camera footage saying "my name is Elijah McClain ... I was just going home." Paramedics administered 500 mg of ketamine to sedate him, and officers were later told he had no pulse in the back of an ambulance and needed CPR.

Three days after arriving at the hospital, the 23-year-old who used to play violin for cats at the shelter is declared brain dead.

McClain was an organ donor, according to the coroner's report.

Sept. 30, 2019: The family of Elijah McClain calls for an independent investigation

A lawyer representing McClain's family called for the Aurora Police Department (APD) to release the body camera footage involved in the case, as well as the 911 call and dispatch transmissions. The family also asked that an independent investigator probe the case, and that the officers responsible be prosecuted.

"From the beginning, Chief Metz ordered an investigation at the level consistent with officer-involved shootings pursuant to Senate Bill 15-219 by having a multi-agency team comprised of members from the Denver Police Department, Aurora Police Department and the 17th Judicial District Attorney’s Office. That investigation continues."

The autopsy report had little insight into how McClain died.

“Intense [physical] exertion and a narrow left coronary artery,” were listed in the report as contributing factors to his death. Blood toxiocology was negative for all substances except marijuana and the sedative ketamine, which was administered by EMS on scene, according to the report.

"The decedent was violently struggling with officers who were attempting to restrain him," the report said. "Most likely the decedent's physical exertion contributed to his death."

Nov. 22, 2019: APD announces no criminal charges against the officers involved in McClain's death

Dave Young, the 17th judicial district attorney, said he would not file charges against the officers involved in McClain's death. Then-Aurora Police Chief Nick Metz said the officers involved had been placed on administrative leave during the investigation, but would be returning to work.

Metz said he intended to put together an advisory team to review the department's use of force policies.

RELATED: No criminal charges will be filed after man dies following struggle with Aurora police

Friends and family of McClain held a news conference demanding justice. His mother, Sheneen McClain, said "if we don't change regardless of color, regardless of spiritual beliefs, we're going to end up right here."

"If you heard him screaming please stop, I can't breathe, that hurts, I didn't do anything – you won't ever forget that," said April Jones, a friend of Elijah McClain.

"Anybody who knew Elijah McClain knew he was one-of-a-kind," she said. "He made it his goal to always make you smile before he left the room.”

RELATED: Family protests decision to not file charges in death of man who struggled with officers

APD said based on all the available information, the Force Review Board (FRB) concluded that the officers were called to the area to investigate a suspicious person. Officers had a lawful reason to contact McClain. The force applied during the altercation to include the carotid control hold and the force applied during the altercation was within policy and consistent with training.

“The loss of Mr. McClain’s life is tragic, and we continue to offer our deepest condolences to his family, friends, and all those impacted by this loss, “ interim APD Chief Vanessa Wilson said at the time.

The bill, which will be introduced on Wednesday, would create a new special investigations unit within the Colorado Attorney General's Office to investigate "the actions or inaction of a peace officer who may have contributed to a person's death or serious bodily injury," according to a draft version of the bill.

The legislation would allow the Peace Officer Standards and Training (POST) Board to revoke the certification of a law enforcement officer if they're convicted of or plead guilty to inappropriate use of force.

June 9, 2020: Aurora bans the use of chokeholds, vows to independently investigate McClain's death

Spurred by days of protests regarding police brutality following the death of George Floyd, APD said it has banned the use of carotid holds.

"This week, Mayor Coffman and the three members of our Council Public Safety Policy Committee asked for a new independent investigator regarding the Elijah McClain case. I hear and understand Council’s concerns—as well as the community’s—about the individual that was hired to conduct the investigation.  Therefore, I have canceled Mr. Daigle’s contract and will be meeting with the Council as soon as possible to determine our next steps in initiating a new review," Aurora City Manager Jim Twombly said in a statement provided to 9NEWS.

A nationwide Change.org petition asking for an independent investigation into McClain's death and that the officers involved be held accountable garnered millions of signatures in a matter of days as the case began to attract attention from national news outlets.

June 24, 2020: Governor Polis asks his legal team to see what the state can do

The three Aurora Police officers involved in the arrest of Elijah McClain were taken off the streets and moved to other duties, the department confirmed.

“This was done in an effort to protect those officers,” Det. Faith Goodrich, a spokesperson for the Aurora Police Department (APD), wrote in an email to 9NEWS.

Officers Nathan Woodyard, Jason Rosenblatt and Randy Roedema have all been moved to largely administrative duties.

RELATED: Aurora officers involved in Elijah McClain's arrest have been re-assigned in department

Colorado Attorney General Phil Weiser has been appointed the special prosecutor who will investigate McClain's death.

If the investigation reveals it is warranted, Weiser will be able to prosecute the officers involved.

A group of protesters that included violinists honored McClain in Aurora, but the demonstration turned into a confrontation with police after the department said some agitators threw water bottles and sticks at officers.

Police used pepper spray in an attempt to clear the crowd.

June 29, 2020: Aurora Police says officers are being investigated for snapping photos depicting choke holds at the site where McClain died

Three Aurora police officers allegedly snapped photos while they put one another in choke holds at the location where Elijah McClain got into a fatal struggle with officers, 9Wants to Know confirmed.

The photos were taken in October 2019.

The officers involved were placed "on administrative leave with pay in non-enforcement capacities" during the internal affairs investigation.

The U.S. Attorney’s Office for the District of Colorado, the Department of Justice’s Civil Rights Division and the Denver Division of the FBI announced they have been looking into the death of Elijah McClain after a struggle with the Aurora Police Department last year.

In a joint statement, the agencies said they began reviewing the facts in the McClain case for a potential federal civil rights investigation in 2019.

Colorado’s attorney general opened a grand jury investigation into the death of Elijah McClain, which has sparked national attention amid protests against police brutality and systemic racism.

“Our investigation will be thorough, guided by the facts and law, and worthy of the public’s trust,” Attorney General Phil Weiser said in a statement at the time. “In order to maintain the impartiality and integrity of the process, we have no further comment at this time.”

The Aurora City Council decided the city's independent investigation into McClain's death would be done by a panel instead of one person. The team won't determine whether officers should face charges, but will instead review if police officers or firefighters broke department policies and what changes might be needed.

July 9, 2020: Fired officers appeal to get their jobs back

Three APD officers who were fired the previous week after a photo came to light of two of them posing in a choke hold at the site of the memorial for McClain appealed in an effort to get their jobs back. Officers Kyle Dittrich and Erica Marrero, who were in the photo, filed appeals July 8, according to a spokesperson for the city. On July 9, the city spokesperson said they also received an appeal of termination from Jason Rosenblatt, who responded to a text of the photos with "HaHa." Rosenblatt was one of the three officers who responded the night of McClain’s death.

The Colorado Department of Public Health and Environment (CDPHE) opened an investigation into the administration of ketamine. A CDPHE spokesperson said the department received "numerous complaints" and "additional information" about the drug's use in June of this year.

McClain's family members filed a civil rights lawsuit against the city of Aurora. The lawsuit was filed in U.S. District Court for the District of Colorado.

The report was highly critical of how the department handled the case and said "the post-event investigation was flawed and failed to meaningfully develop a fulsome record." It also found "serious concerns and significant weakness in the department's accountability system."

The panel recommended the following:

“I moved to Aurora because I wanted my kids to have a better life. Because I didn’t want them to be surrounded by gangs, by violence, by things where they couldn’t be their best self and to still lose your son in a place that you moved to to save his life, is heartbreaking,” Sheneen McClain said during a lengthy sit-down interview with 9NEWS anchor Alexandra Lewis.

You can watch it below.

Sept. 1, 2021: It's announced that a statewide Grand Jury returned an indictment against five people for the alleged involvement in McClain's death.

The 32-count indictment was returned on Aug. 26 but wasn't announced publicly until Sept. 1.

All five of the people named in the indictment are charged with one count of manslaughter and one count of criminally negligent homicide.

The report was the result of a 14-month investigation that looked into whether there was a pattern and practice of violating civil rights.

The report called for Aurora to enter what’s known as a “consent decree” – an agreement requiring specific changes and ongoing, independent oversight of the department. The city has agreed to try to develop one, but the report said if that effort is unsuccessful “we will seek a court-imposed order correcting these problems.”