Police chiefs in the seven cities share their reactions to the video of Floyd's death, and how they're addressing the national effects within their departments. 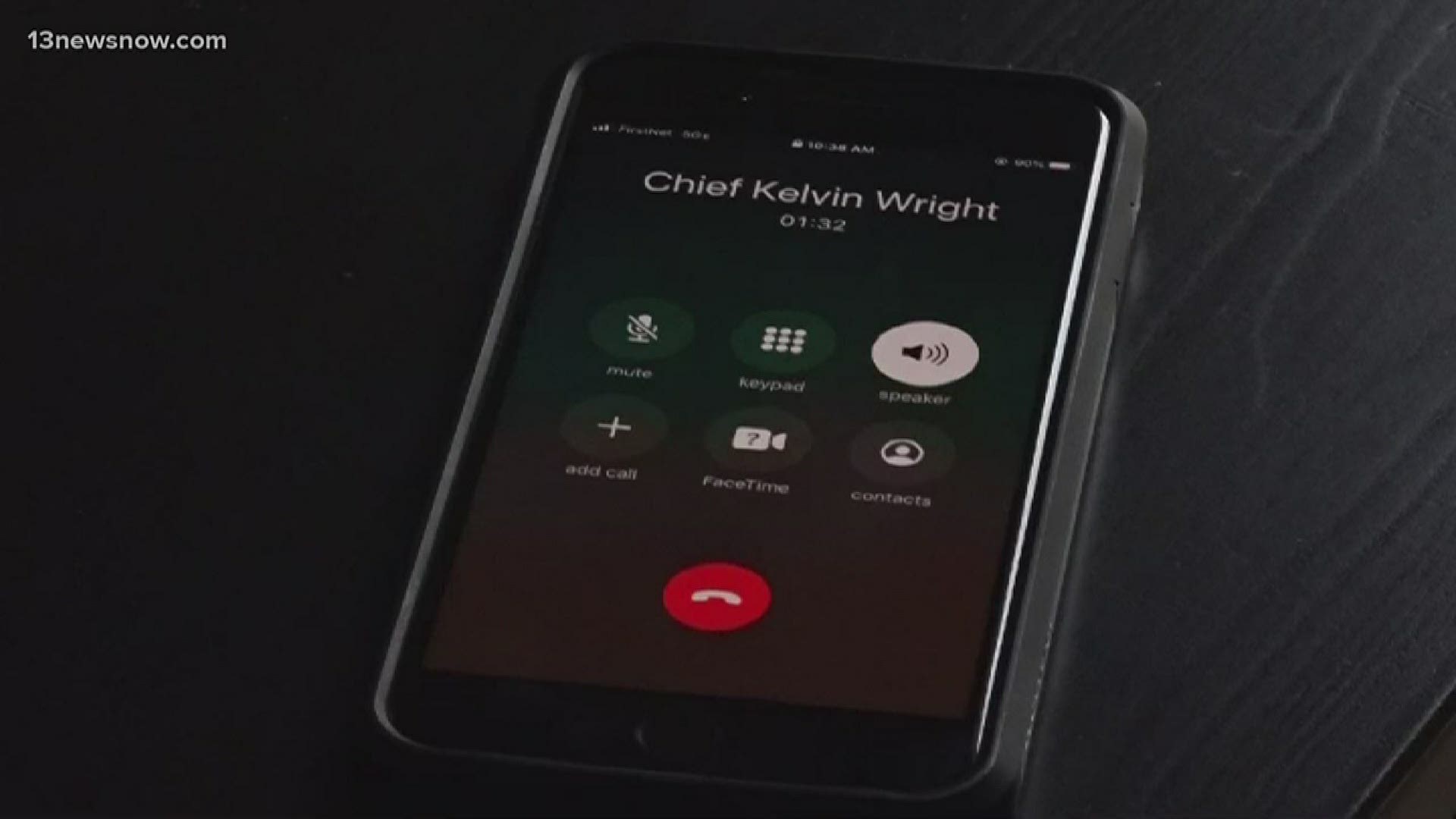 NORFOLK, Va. — Fired Minneapolis police officer Derek Chauvin is now charged with murder and manslaughter in the death of George Floyd, as protests continue in Minnesota and around the country.

In Hampton Roads, police chiefs in the seven cities are responding to Floyd's death and the "sickening" video, condemning the actions of the officers involved and sharing how they're addressing the effects within their departments. Responses to 13 News Now are included below, by city.

“You have citizens telling the officer that this guy is choking, the guy is telling you he cannot breathe and the actions of all those we can see just point to deliberate indifference to me," Wright said.

He said the insensitivity of all officers involved was horrific.

“We talk about how we train our officers to -- if we see something wrong -- we have an obligation to intervene," Wright said.

Wright said it's encouraging to see police departments across the country condemn the situation and the Minneapolis officers should be held accountable.

“I think everybody should take note of how law enforcement across this country has come out and condemned what has taken place, that blue wall of silence is coming down and should continue to do so," he said.

Wright shared additional comments in a memo to his department.

Police Chief Steve Drew said Floyd's death shows why a police department must earn the trust of a community before a tragedy, and not after.

“I pray to God that it never happens here, but if something does happen that this community has enough trust in me and this organization that we will move swiftly, address the issue, investigate and talk to them about it," Drew said.

Drew was one of the first police chiefs in the area to address Floyd's death and offer his condolences to Floyd's family in a video posted on Facebook on Thursday.

“When I saw that, it impacts me as a person," he said. "Someone lost their life at the hands of law enforcement, a career I’m passionate about and believe is foundation is to help protect and serve people in the jurisdictions we work.”

Responding to the arrest of former Minneapolis officer Derek Chauvin, Drew said accountability is essential for every member of law enforcement.

“I do believe that we should all be held accountable, no one is above the law.”

Drew expanded on how persistent involvement in the community is important to building trust and understanding, and said it's a key initiative of his department.

“There was no need for that activity, that use of force, and there’s no excuse for it," Boone said. "What I saw was simply murder.”

Boone is calling for the arrest of all four officers involved in Floyd's death, not just Chauvin. He said that history shows this won't be the last incident of unacceptable police use of force.

“There are going to be opportunities for the professionals in the community to talk about this incident in the coming days, but the unfortunate thing is this will happen again.”

Boone sent out a memo to his NPD officers, reminding them of correct use of force procedures.

"My thoughts go out to that family," Boone said. "I know the community is sick and tired of this kind of behavior from some officers."

“That video will shock the conscience; when I viewed it initially I cringed," Zucaro said.

When asked about Chauvin's arrest, Zucaro talked about the importance of accountability for all officers.

“It’s critical that we have positive relationships with our community," he said.

Zucaro said his department continues to reinforce training on how to handle difficult situations, and said a national outrage illustrates the importance of that training.

Police Chief Angela Greene said she will be using the video of Floyd's death in training for her officers, to show the need of intervention in unjust and dangerous situations.

“Any time they see another officer acting inappropriately or unjustly, it is their duty and responsibility to step in and stop that action and prevent any further harm," Greene said.

Greene said Portsmouth Police is reviewing their training measures, which include the prohibition of the use of force seen in the video, and making sure all officers know it's unacceptable.

“I have watched the Minneapolis video and was truly disturbed," Bennett said in a statement. "Officers are held to a higher standard, and their behavior must be above reproach... I sincerely hope justice is served in this case.”

“Our country is once again faced with an incident where the trust in law enforcement was shaken and a precious human life was lost, the Suffolk Police Department reiterates one of the most basic and primary tenets of our profession – the preservation of life," he said.

Bennett offered his condolences to the family of George Floyd.

"We must strive to maintain the trust of the public, and a key to that trust is carrying out our duties and responsibilities in a lawful and reasonable manner in the name of community safety," he said.

“Professional policing cannot tolerate and must continue to condemn the abuse of any citizen, no matter their race…the Hampton Police Division and I are committed to doing everything we can to prevent a tragedy like this from ever happening in our city.”