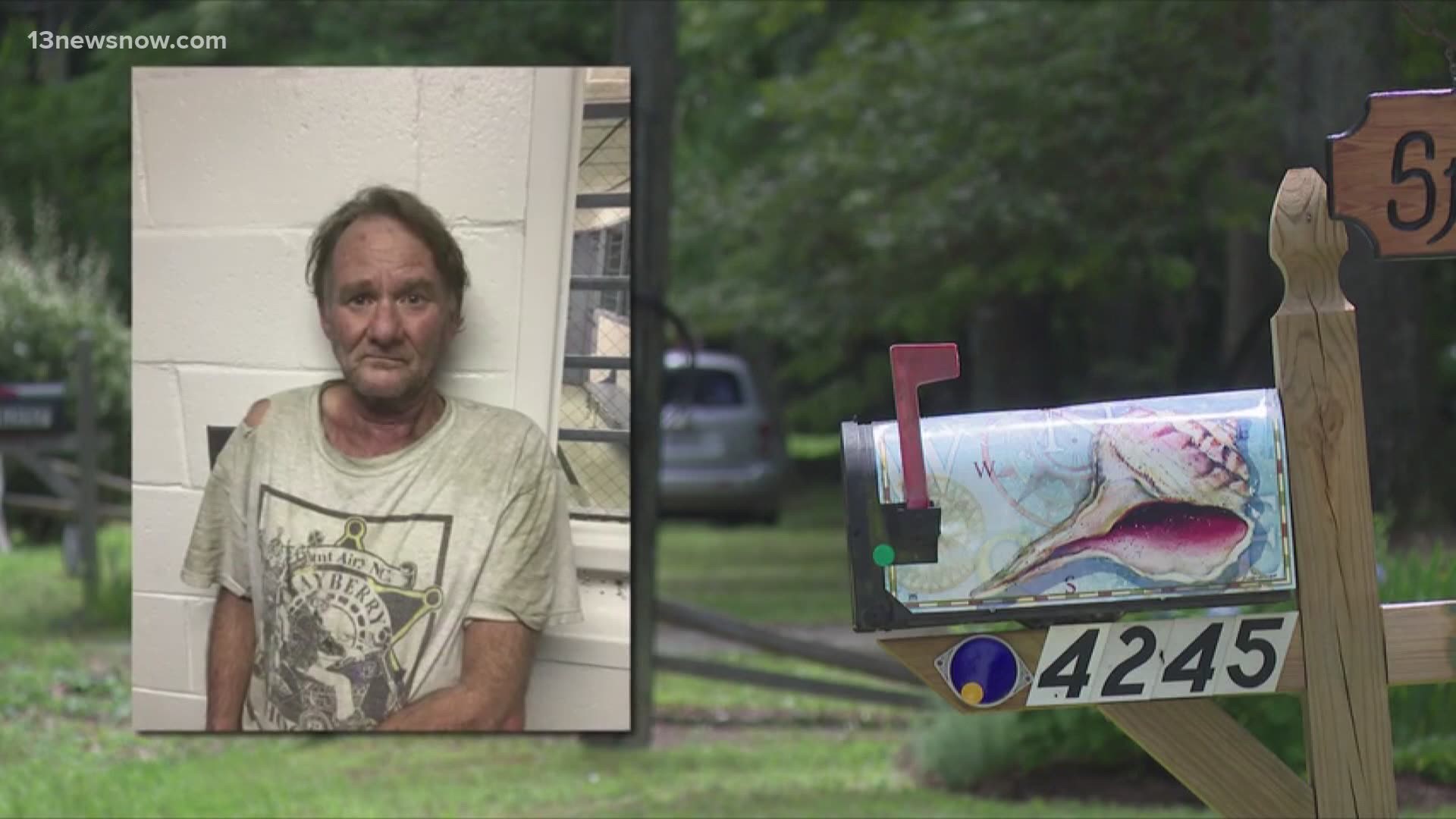 GLOUCESTER COUNTY, Va. — Sheriff's deputies said they arrested a man who is accused of killing his wife's 5-month-old daughter and leaving his wife with critical injuries.

Dennis Chambers, 60, was being held without bond Thursday at the Gloucester County Sheriff's Office. He was transferred to the Northern Neck Regional Jail.

A criminal complaint that the Senior Criminal Investigator filed describes the circumstances under which they found Chambers' wife, Corena, and Corena's daughter in their home on Aberdeen Creek Road.

Deputies wrote they went to the home on July 7 for a welfare check.

Chambers' brother, Johnny Musick, called dispatchers and told them, as well as deputies, that Corena wouldn't answer her bedroom door. She and Chambers share the bedroom. Musick lives in the home with them, as do several of Corena's other relatives.

The bedroom door was locked, and Musick couldn't find Corena's daughter in the home. He didn't hear the baby making any noises in the bedroom, either.

Two deputies forced their way into the bedroom. They found the baby on the bed on her back. She was dead. They also found Corena on the floor next to the bed "with copious items piled on top of her."

The deputies said that Corena, 24, "had suffered severe facial injuries, including fractures, severe blood loss, and further wounds resulting in her inability to speak or coherently communicate with officers. Quantities of dried and wet red fluid and wetness consistent with blood and urine were found on various items around where Mrs. Chambers was positioned on the floor and on the bed area."

Medics flew Corena to Sentara Norfolk General Hospital where she underwent emergency surgery to alleviate swelling on her brain.

Although Corena's relatives said they either saw or spoke to Chambers earlier in the day, he was nowhere to be found at the time deputies were at the home for the welfare check.

Corena's mother told 13News Now Thursday the family was "relieved" when they got the call that Chambers was arrested.

In applying for an arrest warrant for Chambers, investigators said in the criminal complaint that they found out that Corena "had been having several extramarital relationships with various men" and that Chambers recently found out that Corena's baby daughter "was not his  biological child."  A neighbor told deputies that Chambers was upset because of that "and he would be seen weeping outside the residence."

Neighbors and family members said arguments between the couple recently increased because of Chambers' health issues which kept him from taking a planned trip for the Fourth of July.

Court documents state that while an investigator was interviewing Chambers, he confessed that he used a hammer to hit his wife in the head "between two and three times." The investigator said Chambers also confessed the he "used a cotton 'burping cloth'" to "smother" the baby. Chambers supposedly said he held the cloth over the baby's mouth and applied pressure for a couple for a few minutes until she stopped moving, then left the bedroom and locked the door.

The charges against Chambers are: