Law enforcement agencies nationwide have launched a new MS-13 tipline to help end the fear and violence the gang causes. 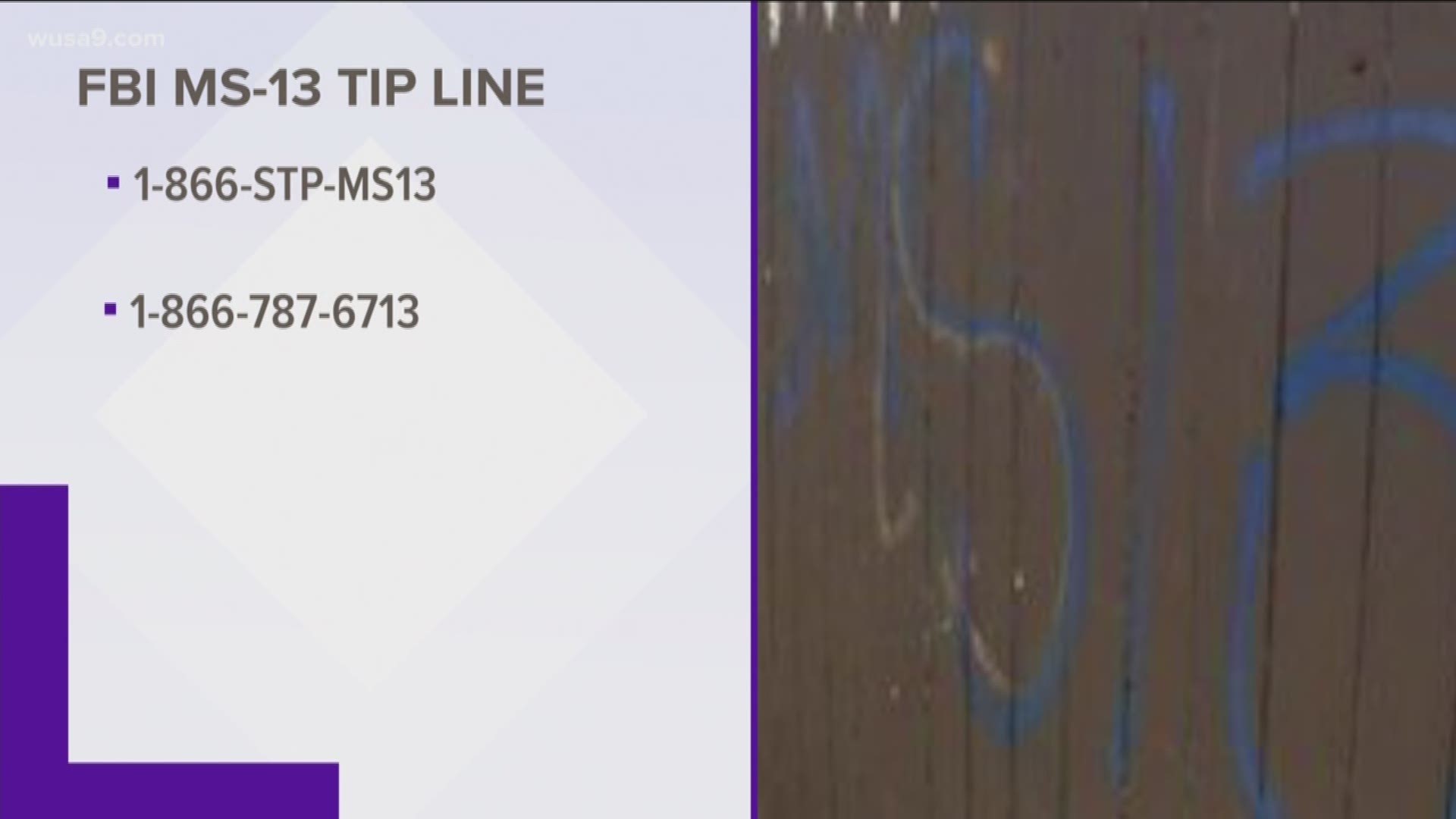 WASHINGTON — Local law enforcement agencies have launched a new MS-13 tipline for the public to report information about the gang. Authorities hope this tipline will encourage witnesses and victims of MS-13 violence to report crimes committed by the gang, without the fear of retaliation.

Authorities said the gang is present across the nation, and this tipline is a tool to help fight against MS-13.

Robery Hur, U.S. Attorney for the District of Maryland, said MS-13 uses violence and fear to take control of their communities. This violence starts even before someone becomes a member of the gang.

"Members undergo a beating to gain admission," Hur said. "Upon seeing someone who they think is a member of a rival gang, they must attack and try to kill that person."

But the gang doesn't just murder its rivals.

"They behead them and dismember them in order to spread fear," Hur said.

The motto the gang lives by is translated to "kill, rape, control," used to promote violence and send a message to local communities. In the last year, there have been several brutal MS-13 murders of young people in the DMV.

A 16-year-old from Fairfax was found dead in Stafford County, stabbed 100-plus times and set on fire. Additionally, 16-year-old Eberson Guerra-Sanchez from Frederick was found dead with his hand cut off beneath the Chain Bridge in April.

But Hur said many victims to the gang's violence have no involvement with other gangs to begin with.

"The gang purports to target and kill its perceived enemies, but we find all too often that MS-13 victims have no connection to gang life other than the misfortune of crossing paths with MS-13," Hur said.

Ariana Funes-Diaz, a 14-year-old girl, was another victim to MS-13. Funes-Diaz was reported missing from Anne Arundel County earlier this year. She was later found dead in a creek of Prince George's County. Funes-Diaz was brought to a remote tunnel and beaten and stabbed.

Police said cadaver dogs helped find the body of Funes-Diaz, who had been reported missing from a "therapeutic" group home for girls in Anne Arundel County. Prince George's County Police said she was beaten and stabbed by two men, while a woman watched. An unknown suspect took video, according to court documents.

Joel Escobar, 17, of Northeast D.C., Josue Fuentes-Ponce, 16, of Bladensburg, Md., and Cynthia Hernandez-Nucamendi, 14, of Lothian, Md., were all arrested May 16 and are facing charges.

Fuentes-Ponce and Escobar are believed to be members of an MS-13 clique in the county, Prince George's County Police said. An investigation showed the other suspects believed Funes-Diaz planned to go to authorities about the D.C. crime, then plotted to kill her.

Hur said the gang doesn't just use violence to exert fear. It extorts local immigrant communities in order to survive. They make immigrant-owned businesses pay "rent" or "protection money" to help sustain themselves.

"The gang forces small immigrant-owned businesses to make a choice: either make regular payments to MS-13, or have yourself and your family suffer violence at the hands of the gang," Hur said.

By calling the MS-13 tipline at 1-866-STP-MS13, the community can help prevent crime and murders caused by the gang.

"We are determined to bring an end to the fear and the violence of MS-13," Hur said. "But we cannot do it alone. We need the help and the trust of the communities we serve, and that are being victimized."

RELATED: MS-13 is believed to have killed a 14-year-old with a bat and machete. Now, police are searching for the person who took video