Surveillance footage shows a large group of people jumping the men in front of a hotel in Washington D.C. The victims are both from Hampton Roads. 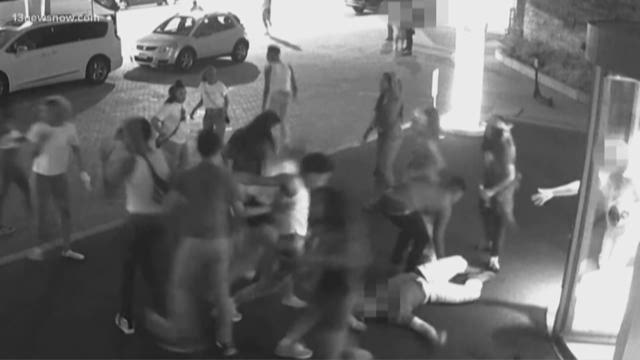 Police in Washington D.C. are asking for the public's help to identify three persons of interest involved in a fight that happened outside a hotel last month that left two men from Hampton Roads with serious injuries.

Surveillance video from the July 14 incident outside of a Hilton Hotel shows several people, some of them teenagers, punching, kicking and stomping on a man. Police said the man was knocked unconscious. At the end of the video, another man is seen helping the first man and he gets hit as well.

In the police incident report, the men who were attacked are identified as Trey Plute of Newport News and Tony Robinson of Hampton.

According to the narrative included in the report, Robinson said he and Plute saw a group of "juveniles" at a corner. One of the people in the group screamed, "That's him!" while pointing at Plute.

Robinson replied, "That's not him. You have the wrong person."

Then, the group attacked.

Plute had injuries to his head and his left eye socket. Robinson had a swollen left eye. Both went to the hospital to be treated.

So far, a 15-year-old girl and a 17-year-old boy have been arrested for participating in the attack.

Police are now asking for help to identify three additional individuals seen punching and kicking one of the victims.

Credit: Washington DC Police Dept.
Police in Washington DC are asking for help to identify three 'persons of interest' caught on video attacking a man in front of a Hilton Hotel early on July 14, 2019.

Crime Solvers of Washington, DC currently offers a reward of up to $1,000 to anyone who provides information that leads to the arrest and indictment of the person or people responsible for a crime committed in the District of Columbia.