'They're gonna think I did this': Neighbor recounts alleged comments by murdered child's father

The trial of a young couple accused of killing a 2-week-old girl, then hiding her body in a wooded area near their home started Tuesday in Newton County. 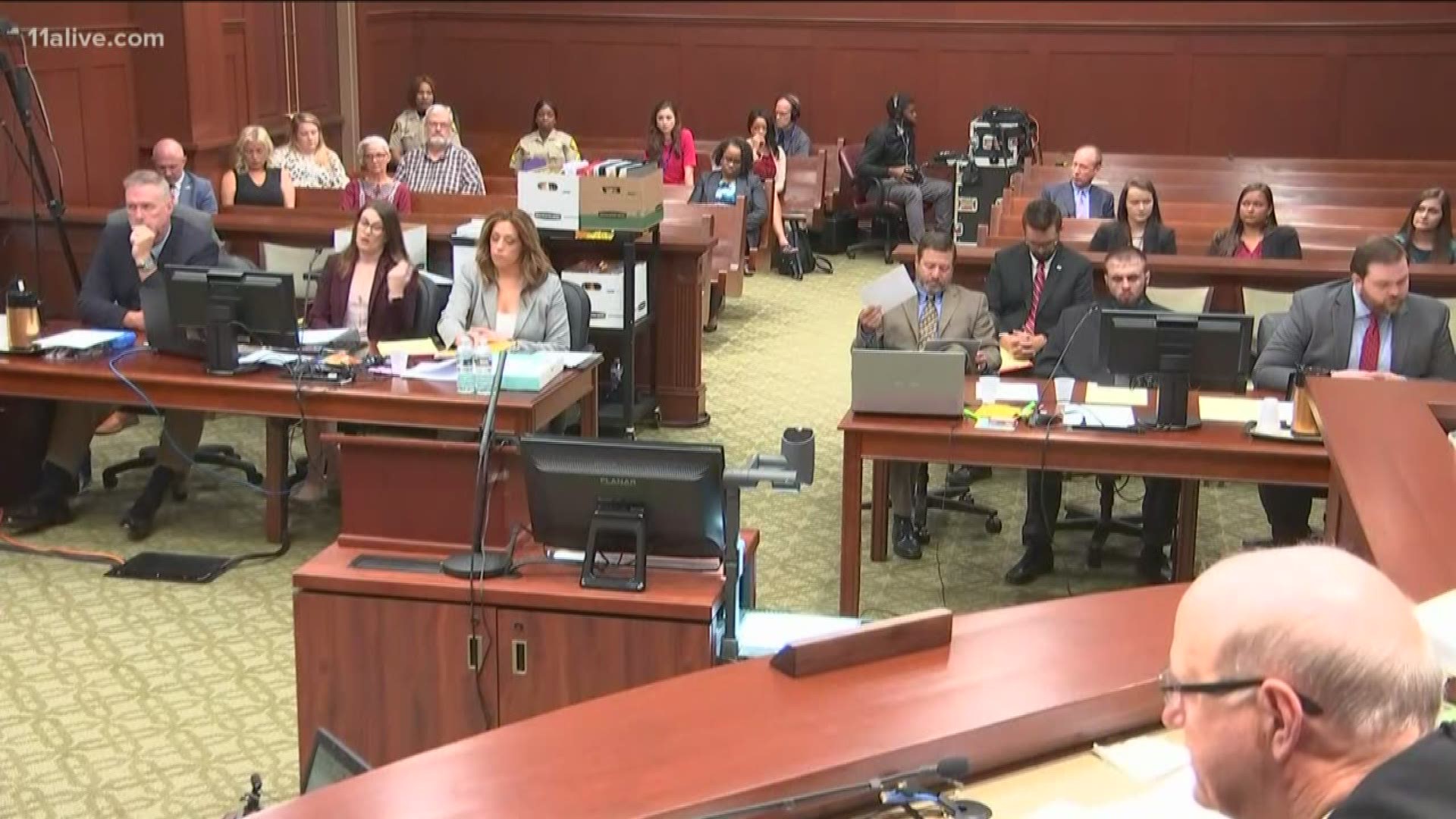 A neighbor who was called over in the moments after 15-day-old Caliyah McNabb was discovered missing in 2017 described the emotional state of the parents accused in the infant's murder on Tuesday in the first day of the trial.

Melissa Davis said Christopher McNabb was "hysterical" and screaming, "They're gonna think I did this," while mother Cortney Bell was "hollering" the child's name over and over.

The body of little Caliyah was found the day after she went missing in a wooded area not far from her parents' home near Covington.

A Newton County jury heard opening statements and testimony Tuesday morning in the trial against parents Christopher McNabb and Cortney Bell, who were accused of killing and covering up the murder of their two-week-old baby.

►RELATED: Her 2-week-old body was found in the woods near her home. Her parents are charged with murder.

McNabb and Bell are facing multiple charges, including murder, in connection with the crime.

In addition to allegedly killing their infant daughter, the two are also accused of then dumping her body in the woods not far from the Eagle Point Trailer Park.

Davis described how she was called by Bell in the morning and then came over to their home.

"Chris was on the front porch. I went up to him, I said, 'Chris, calm down, what's going on?'" Davis said. "He kept screaming, 'They're gonna think I did this.' I told him to calm down, let's figure out what's going on.

►RELATED: Daddys' girl | How tumultuous past leads to heartbreaking ending

Responding officer Joshua Hicks also spoke on the stand of how Bell exhibited a "sporadic," demeanor.

"She would be calm and collected as shed begin describing what happened to the child, then she'd start to panic a little bit, then right back to being calm and collected," Hicks, a Newton County sheriff's deputy, said.

He also described how when McNabb, the father, returned from searching for the child in the woods, he was "fidgety."

"Like going in and out of his pockets, looking left, looking right," Hicks said.

The video showed Bell, appearing frantic and distraught, first meeting officers, during their search in and around the home, and later showed their interaction with McNabb returning from the woods.

Bell appeared to have a black eye, still swollen -- she did not explain how she got it. Her voice trembled as she said she couldn’t find Caliyah anywhere and had no idea who might have taken her.

It showed McNabb, too, returning from going into the woods around the home to immediately try to find the girl. Soaking wet from the rain, he told deputies he’d been searching for his daughter and also had no idea who might have taken her.

Another sheriff's deputy, Raymond Walden, was the first to encounter McNabb as he came back out of the woods. The deputy described their interaction on the witness stand.

"He was not excited or anything. He just walked up to me and looked at me. I noticed he was soaking wet, his feet was muddy, I said 'Where you been?'" Walden said.

"He said he left the trailer and went into the woods ... I said 'Why did you go in the woods looking for a 2-week-old child?' He said, 'I was just looking.'"

Volunteers also described the search that led to the child's body. Tara Robinson found the hole where Caliyah bad been buried in a drawstring athletic bag concealed by a log and sticks.

"The tree log was unusual to me, the way it was sitting. Under the log there was pile of sticks and twigs. I picked up one of the sticks and began to move away some of the leaves and that's when I saw the black string," she said. "I took the stick and pulled it up to see what it was and it was a bag, and that's when i told one of the children to get the officer."

Bell's father Tim Bell testified earlier in the day, in one instance saying McNabb looked "shady" when he showed up from the woods and indicating he felt the father used his children to get money.

Bell's cousin Megan Sorrels also testified, explaining how she often cared for Bell's children and had been concerned about their safety, when Bell and McNabb would fight or do drugs at home.

"She always had bruises on her," Sorrels said. "I've went through abuse myself, so I didn't really have to ask many questions. I could tell."

In opening statements, Newton County prosecutors had told jurors they would hear that McNabb and Bell were negligent parents who created an unhealthy home for Caliyah and their two-year-old daughter Clarissa, smoking meth and bringing drug-addicted friends into the house.

"We're not going to sugar coat anything for you, we're going to show you exactly how this baby was living," Newton County Assistant District Attorney Alex Stone said.

Defense attorneys countered that the state wouldn't be able to meet the burden of proving McNabb and Bell were responsible for Caliyah's death beyond a reasonable doubt.

McNabb's attorney Anthony Carter painted his client as a vulnerable father who was targeted by police simply because he was the easiest option.

"They focused like a laser on Christopher McNabb as being the person who killed his daughter," Carter said.

He said police "developed their whole case around supposition, the hypothesis that McNabb is one who killed his daughter."

Bell's attorney, Bryan Frost, said there was no evidence against his client.

"What I don't believe you're going to hear at all is any evidence whatsoever, direct or indirect, that my client had anything to do with this heinous crime against her daughter at all," he said.

The jury then heard the 911 call Bell made the day their daughter went missing, and McNabb wiped away tears.

A Georgia Bureau of Investigation medical examiner determined that the infant had died from blunt force trauma to the head.

McNabb was charged in October 2017 with felony murder, aggravated battery and concealing a death.

In January 2018, Bell was arrested and charged with second-degree murder, second-degree cruelty to children and contributing to the deprivation of a minor.

He said he'd kill her if she left him. He did. She was pregnant.

Police: He took a cupcake. They beat him to death with a baseball bat.

A body, a burning truck and the Ghostface Gangsters: 4 convicted in Mableton murder