DC Fire and EMS confirmed the picture includes Recruit Class 387 and their instructors. The department is investigating the photo. 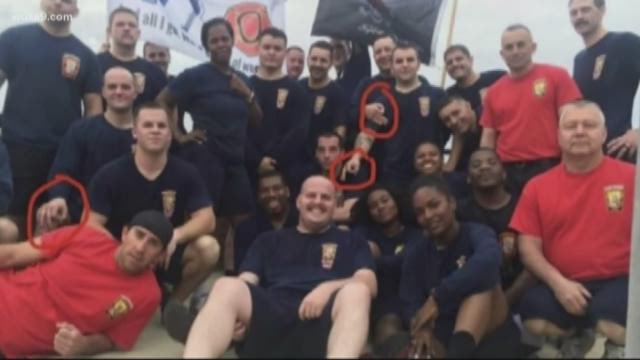 The gesture is similar to the "OK" hand sign. The three fingers extended is supposed to be a "W" and the circle coming off the arm is a "P" -- "WP" for "white power."

The photograph surfaced on Facebook and includes Recruit Class 387 and their instructors, D.C. Fire and EMS said.

D.C. Fire and EMS said they were made aware of the picture Wednesday. The department said it believes the picture was taken in March 2019 and the recruit class graduated in April 2019.

The department is now investigating the picture.

"The department has immediately initiated an interview review of the photograph, which may include interviews with everyone pictured in the photograph," D.C. Fire and EMS chief communications officer Doug Buchanan said.

Tripp Simpson
And nothing ever gets done about it

A viewer sent the following message to WUSA9:

"As a district citizen, I don't feel comfortable with DC fire recruits taking pictures while showing the white power symbol. They all just saw the fall back from the Navy midshipmen doing this online, yet they still decide to follow with the same racial antics. Whoever took this picture and posted it online, should be looked at as well."

This comes after the U.S. Military Academy and Naval Academy launched separate investigations into possible "white power" hand gestures flashed by a few students at the Army-Navy football game in December 2019.

Public affairs officers at both academies said via email that officers were appointed to conduct internal investigations and determine if disciplinary action was needed.

Several West Point cadets and Naval Academy midshipmen in the stands appeared to display the hand signal during an ESPN broadcast segment.

Some on social media argued that the cadets were simply saying "OK." Others argue they were playing the "Circle Game," which uses the same symbol. But in that game, the idea is to hold the "OK" below your waist to convince a second person to look at it. If the other person looks, they get punched in the shoulder.

The Anti-Defamation League says use of the symbol to express white power started popping up in 2017. But the group also says that since there are several meanings for it, including saying "OK," "Three Percenter" or the "Circle Game," care must be taken in determining how someone intended to use it.

The military investigation concluded that hand gestures flashed by West Point cadets and Naval Academy midshipmen during the televised Army-Navy football game were not racist signals.

A Navy probe of the event found that the students were "participating in a sophomoric game" and had no racist intent.

"The investigating officer concluded that the cadets were playing a common game, popular among teenagers today, known as the “circle game” and the intent was not associated with ideologies or movements that are contrary to the Army values," the U.S. Military Academy announced.