The segregation-era cemetery in Polk County has been vandalized and abandoned. Who's responsible for upkeep? 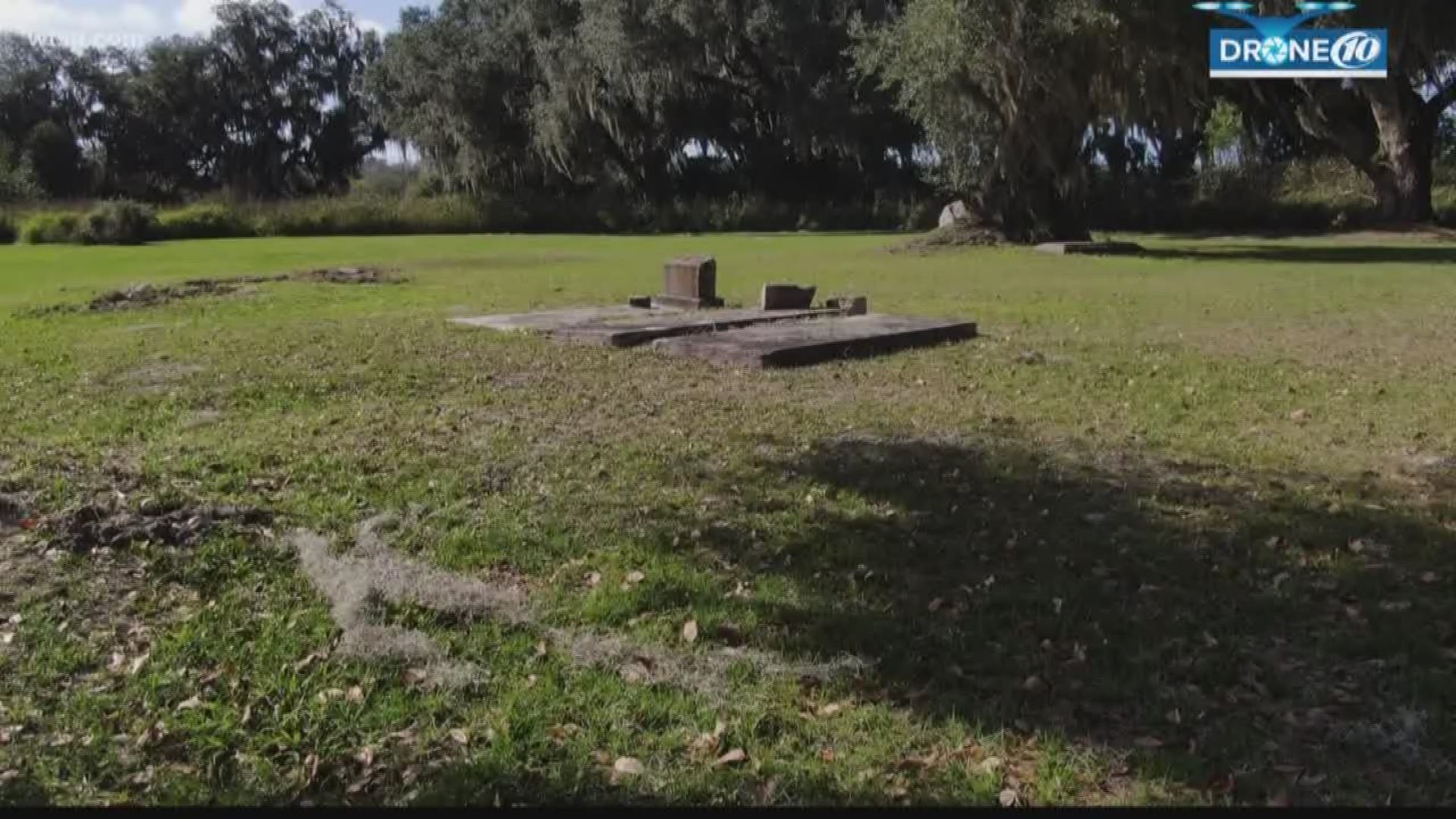 HOMELAND, Fla. — Homeland’s African American cemetery in Polk County holds a wealth of history, but that history faces multiple threats as the property has been vandalized, abandoned and forgotten with no clear direction on who’s responsible for upkeep.

“I would love to have [someone] come out here to help…so we can see if it's any of our loved ones left,” said Johnnie Miller Jones.

Jones said she has a host of aunts, uncles, cousins and other relatives buried in Homeland’s African American cemetery off Old Homeland Cemetery Road. Records show the historic cemetery dates back to at least the late 1800s. However, with no clear owner, the burial ground has fallen victim to grave robbers and other types of vandalism that has not only destroyed the cemetery but also has destroyed descendants’ sense of peace about their past.

Jones said there have been reports of people removing bodies and skeletons and using them for target practice. She said although the front gate is locked, there is a way for people to sneak in through the back.

“I feel like I hope it's not my family [stolen from graves] because it's very difficult to see that and think that your family member is no longer there...whatever was done to it makes me a little bit sad in a way because you'll never be able to get that back,” said Jones of the graves that have been robbed. “I don't mean the skeleton, I mean the memory.

"With the big hole there, that's the memory you'll have. That hole. You will not have the memory of a loved one because you don't have the name plate, the casket, nothing.”

RELATED: Are there are even more graves under an old Clearwater school? Probably, archaeologists say 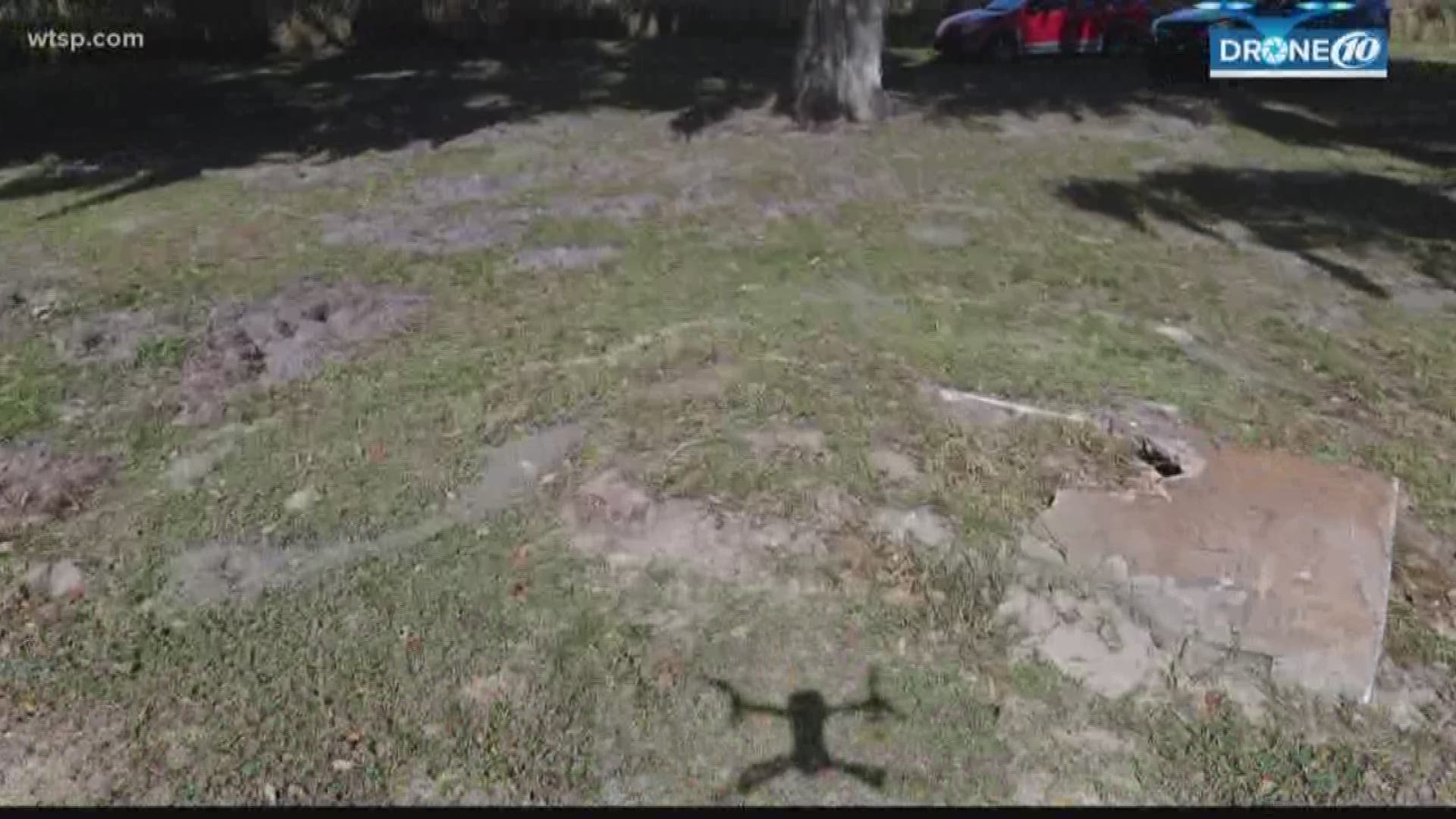 Jones said she fears the cemetery will eventually disappear.

“It's gorgeous out here and so peaceful. It's really tragic that this hasn't been kept up and property secured so that the vandalism has taken place,” said Alexa Hamm, trustee for the Homeland Cemetery Association. “This is just really a shame to see.”

The Homeland Cemetery Association serves the main cemetery in town and is separate from the Old Homeland Cemetery. The two cemeteries were created during the Jim Crow era, so they were segregated by race.

RELATED: What about the kids? Students react to cemetery discovery at high school

“I wasn't born during those times so I don't really understand at all, but you know, the fact that the [phosphate] mines came in and bought up all the property from the black neighborhoods, as well as the white…the black population of Homeland moved away and left the cemetery,” Hamm said. “They trusted, I guess the county, to oversee it, and so I think that led to its being vulnerable and fragile because there was no one close to watch out for it.

"Whereas the main cemetery, a lot of the families still lived here in town and got donations…And so, it's really a shame. I'd like to see that remedied somehow.”

The cemetery is currently kept under lock and key limited access to the area to cut down on vandalism. Jones is one of the few to have access to the cemetery because of her ancestral connections. Jones also has a list of about 52 people buried in the cemetery and their burial locations. Many of the entries are unknown.

Jones said there are far more people buried in the cemetery than the list shows.

Hamm said she would like to work with Jones to restore the cemetery and possibly get a historical marker placed on the property. Both hope to get some archaeological surveying done to determine the number of burials in the area so families can locate their loved ones.

“I think that would be really very satisfying to do and I think it would be worth it for those people and just for the sake of Homeland history in general,” Hamm said. “It would be good for all of us to preserve this.

The Polk County Clerk of Court’s office said it could not trace any deeds to an owner. The office did have a plat map of the cemetery filed in 1888. The property appraiser’s website also shows no one owns the cemetery. However, notes in the property appraiser’s file pointed to a 1925 deed naming the St. Paul AME Church of Fort Meade as the grantee.

A trustee and long-time member of the church said he was aware of the deed and had been to the cemetery years ago, but upkeep fell by the wayside and access was eventually restricted.

"Look like somebody had been using [the cemetery] for a shooting gallery,” May Williams said. “I was told they had been out there retrieving skulls...We went out there one day [to] clean up…And I haven't been back out there to look down in there since. They put a lock on the gate and we couldn't get in…” he said.

The county locked the gate years ago, but because of her ancestral connections, Jones is one of the few to have a code.

Church trustees said they would be willing to work with Jones to figure out a plan to save the site, but will consult with the national leadership of its African Methodist Episcopal denomination first.

"Since this is verified that it is our property, yeah, I would be willing to put the effort to make it a historical landmark,” said trustee Eddie Wilcher.

Emerald Morrow is a reporter with 10News WTSP. Like her on Facebook and follow her on Twitter. You can also email her at emorrow@wtsp.com. To read more about the search for lost African American burial grounds in the Tampa Bay area, head to wtsp.com/erased.