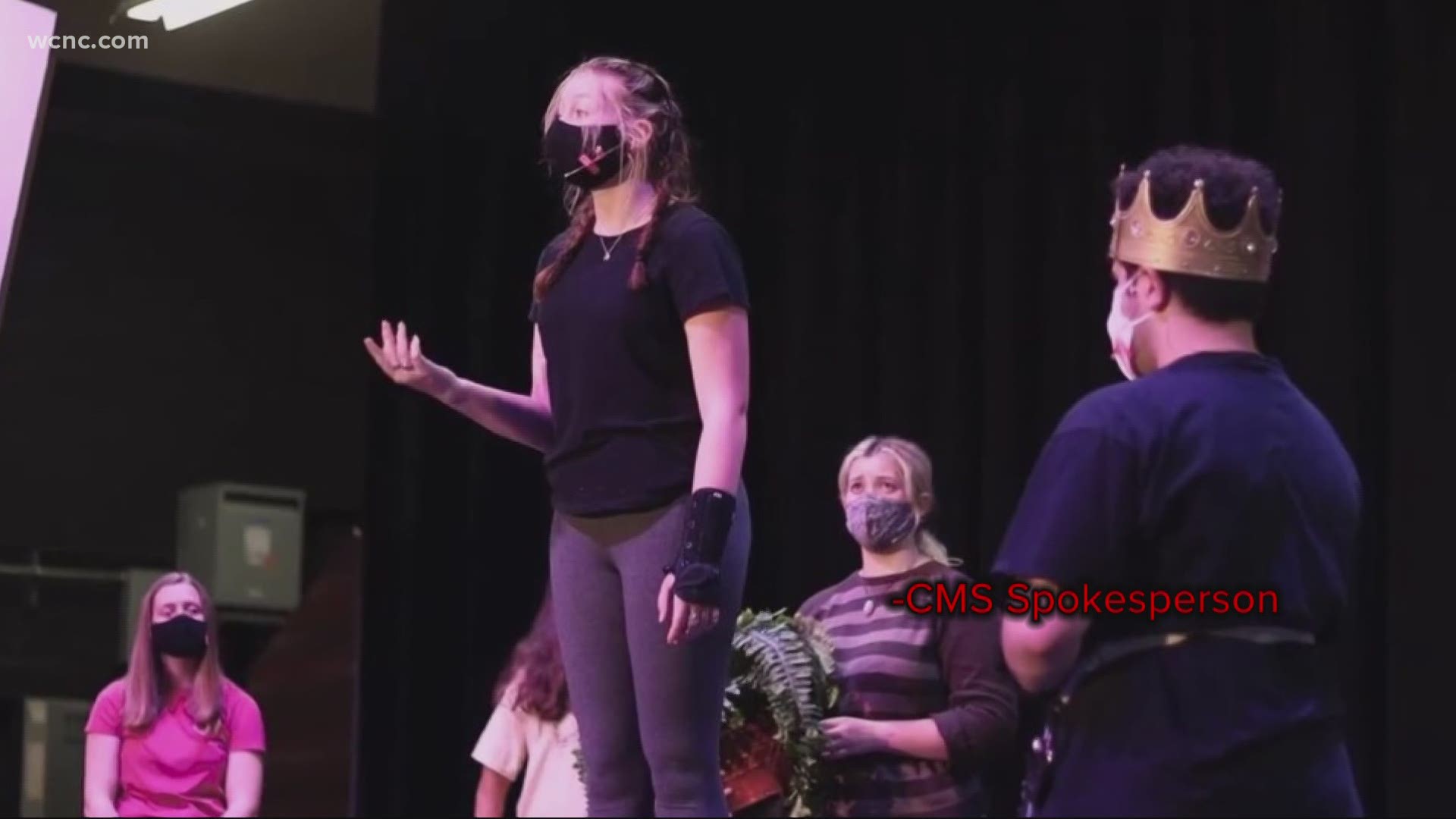 CHARLOTTE, N.C. — A recent decision by Charlotte Mecklenburg Schools is far from worthy of a standing ovation from theater parents at Providence High School.

CMS Superintendent Earnest Winston made the decision to not allow parents to attend their child's end-of-the-year performances due to the ongoing pandemic.

"I just want to see my son on stage for his final performance," said Adam Binder, whose son, Daniel, is a senior at Providence High School.

Binder's son is also the lead for his high school musical, 'Spamalot.'

"Theater is my child's sport. And he's great about it and he's passionate," Binder said.

Binder and other parents are upset since they won't be able to see their child perform one last time.

"Why can't I go to the theater?" Binder asked.

He believes the district is treating theater students differently than all the rest, including student-athletes whose parents were able to cheer on their kids in person at both indoor and outdoor games.

"Why are they different than the quarterback of the football team? Or a guard in basketball?" Binder asked.

CMS will allow Spamalot, a comedic musical, to be performed before other students and faculty.

"To us, that's rehearsal -- that's what we've already been doing," said Jessica Daitch, whose sophomore daughter is in the play.

They want a scientific explanation as to why they won't be able to watch their children perform in person. Daitch said the theater's booster club even thought through all the safety precautions to have a live audience with a reduced capacity.

Audience members would wear masks and be socially distanced and divided by pods by family.

"CMS has one rule for athletics, and another rule for non-athletes," Daitch said. "Basketball, wrestling, volleyball -- they all had their seasons. We're ready for ours. Our show is ready to go."

The theater students have been practicing since January and were even spotlighted on the district's Instagram page when they started rehearsing again.

Winston said in a press release, "As a parent, I would love to see my children perform and be recognized at their school. As a district, we are committed to us all being able to do this as soon as possible. We can't risk moving backward at a time when our schools are developing a rhythm of in-person teaching and learning. This course of action prioritizes the well-being of our students, enables them to experience celebrations and activities while allowing our school personnel to responsibly manage operations at the school level."

For parents, Winston's explanation is nothing to applaud at.

"I hope he'll reconsider and say you know what, time to open the show, time to raise the curtain, and light the lights. Because our students are ready," Daitch said.

For now, the musical will be live-streamed for parents to watch online.

In the meantime, CMS students in Matthews may have a chance at live performances -- the Town of Matthews has extended an offer to schools in Matthews to utilize official town facilities for these arts programs and student club events.

As part of the offer, students can proceed with their spring production at the Fullwood Theater in the town's Community Center. Students may also use these facilities for award programs, club events, and performances, according to the Town of Matthews.

“Students have been working hard all year in these various clubs and programs and to not have a place in their school to perform or receive recognitions for their efforts in front of their families is a shame,” Mayor John Higdon said in a statement. “Arts programs are important for student development and growth and we want to make sure our students know how much we value their work. We believe the right thing to do is provide equitable access to performance venues in Matthews for all students.”

Commissioner Ken McCool said in a statement that arts are important to education, and he was excited for the opportunity students now will have to perform in front of parents.

“In a year of so much hardship and turmoil, we should help give some more joy to our community," McCool said in the statement.