The thrill of the popular Harry Potter game didn't end when the movies left the theaters. 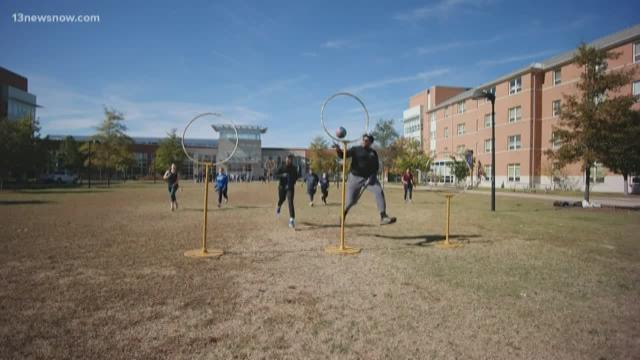 NORFOLK, Va. — It’s been a little while since Harry Potter thrilled us in theaters.

However, the excitement of that high flying game of Quidditch, the game they play in the books and movies, didn’t end when the movies left the big screen.

For anyone who doesn't know, Quidditch is was created in 2005 and played in now played in over 40 countries.

A quidditch team consists of up to 21 athletes with seven players per team on the field at any one time. Points are scored by throwing a ball (the quaffle) through any of three hoops fixed at either end of the field, while another ball (the bludger) is used to ‘knock out’ players temporarily. The snitch is the ball that must be caught to end the game.

The club started back up last year after an older team disbanded.

Fans of the books and movies, like member Eric Hall, now get to live out the fantasy in person.

“At first I was joking,” said Hall. “But then I came out to the first practice, and it was pretty fun. Now here I am playing full-blown Quidditch.”

There are teams all over the country.

US Quidditch, the governing body of the sport nationally, has almost 200 teams registered and nearly 4,000 athletes, including the Monarch Legion and several other schools in our region.

The goal is to score the most points by throwing a volleyball, or Quaffle, into custom-made hoops that sit on either side of the field.

Each team member must carry a stick between their legs also.

The sport is co-ed and full contact, which Phelps can’t find in most college sports.

“I’m a little more sturdy, so I like to rough around with the boys,” said Phelps.

If anyone wants to enjoy Quidditch in person, there is a tournament this weekend at the College of William and Mary.