An online campaign to help teachers stock their classrooms, including some in Hampton Roads, has gone viral. 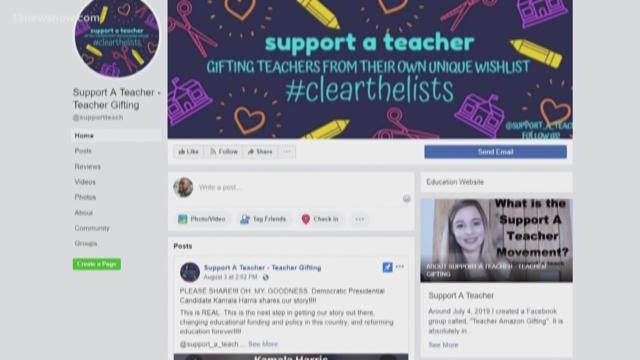 NORFOLK, Va. — An online campaign to help teachers stock their classrooms, including some in Hampton Roads, has gone viral.

Courtney Jones, a teacher in Tyler, Texas, saw an opportunity to help her fellow educators. She first started a Facebook group called “Support a Teacher," then her Twitter hashtag #clearthelists quickly went viral.

Teachers can upload their Amazon.com classroom wishlist to social media using the hashtag #clearthelists. Strangers from across the world can pitch in to purchase those items, relieving teachers from the stress and financial burden of doing it themselves.

“On average, the U.S. average we spend about $500 out of our own pocket," Jones said. “This drive has really given them a drive to succeed, they found their passion again, they realized what it was really for. So that’s been awesome to see just how excited people really are to go back into the new school year."

Even celebrities have caught on, with Khloe Kardashian, the Bobby Bones Show and others promoting the hashtag.

“It’s been really nice to see that we’re changing public opinion," Jones said. "I think that’s been the biggest place to start with making the change to getting schools outfitted the way they should be.”

There’s also an option to just donate to the “clear the list” campaign.