"Ms. Joe," as she's affectionately called, worked at Reedy Fork for 12 years. She's remembered for keeping students in line and for her abundance of kindness. 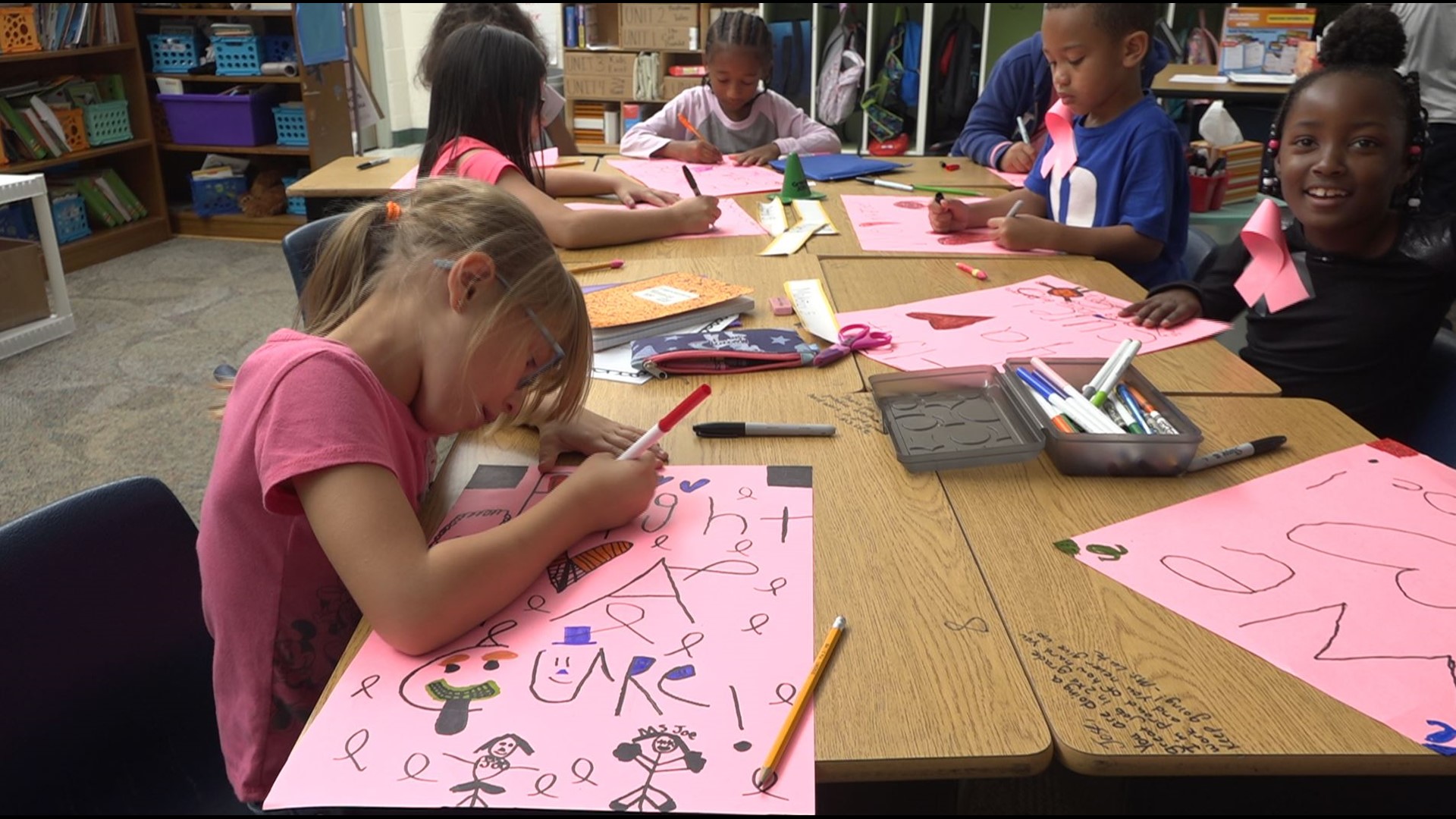 GREENSBORO, N.C. — Monday was a special day for students and staff at Reedy Fork Elementary School. Students participated in a Breast Cancer Awareness event. Their inspiration and motivation--a former lunch lady who recently passed away.

Students dressed in pink and created signs to honor and remember 'Lunch Lady' Josephine Slade who died from breast cancer before the 2019-2020 school year began. "Ms. Joe," as she's affectionately called, worked at Reedy Fork for 12 years. She was known for keeping the students in line and for her abundance of kindness that she extended to everyone she met.

"She always had something kind to say to me, and that was nice," said Nelson, a student Ms. Katrina Lutz's 2nd-grade class.

"If you ask anyone, her presence her was so good and so strong," said Lutz, "she was like a mother to me. She was a part of the fabric of the school."

Michelle Poku worked with Slade for years. As she cleans the station Slade occupied, she can't help but reminisce on the kind soul who is missing from work this year.

"I remember I was going on vacation one time to go home," Poku said, "Joe had put some money for me in a card to use on the trip. I'll never forget that. She took us co-workers as her family."

Nearly two months after her passing, Debo Isley, Reedy Fork's cook and Ms. Joe's longest friend at the school, is still having a difficult time. She loves the awareness efforts, but they remind her of Slade. Monday would have been her 75th birthday. It's almost impossible for Isley to comprehend. Just a few months ago, Ms. Joe was perfectly healthy.

Isley said Slade was diligent about getting had been diagnosed. In April, Slade's latest mammogram came back clear of any disease.

"She always told us [the check-ups] were so important for everybody. She would stay on us to get checked too. Which is why we were so shocked how it happened so fast."

On August 6th, 2019, "Ms. Joe" went in for another check-up. She received the results a week later: Stage 4 metastatic breast cancer. The cancer had spread to her organs. On August 20th, just days after the diagnosis, Slade passed away. Her family and friends were stunned. Isley chokes back tears as she thinks about how quickly the cancer took hold.

"Cancer, when it hits, it hits hard. Sometimes it hits fast," Isley said, "[Josephine] never complained at all or mentioned her health. She was always on the go. Nobody knew how bad it was."

Therein, Katrina Lutz says, lies the purpose of the fundraiser. She knows the amount likely won't add up too more than a few hundred dollars, but the awareness, she says could change someone's life. Lutz imagines the moments after Slade's diagnosis. She wants the fundraiser to provide hope for others who also face those trying moments.

"We want our kids and people who hear about this that no one is fighting the fight alone," Slade said.

If you would like to donate, you can do so here in Josephine Slade's name or send donations addressed to Katrina Lutz to Reedy Fork Elementary School.

Experts estimate more than 265,000 women will be diagnosed with breast cancer in the United States this year.

The American Society for Clinical Oncology says breast cancer is the second most common cause of death for women in the U.S. after lung cancer. Nearly three million women in the country have received a diagnosis at some point in their lifetimes according to ASCO research.