Ant-Man and the Wasp cast are life-sized action figures

Ant-Man and the Wasp is out in theaters this week, and Jim has the Northwest television exclusive with the cast. 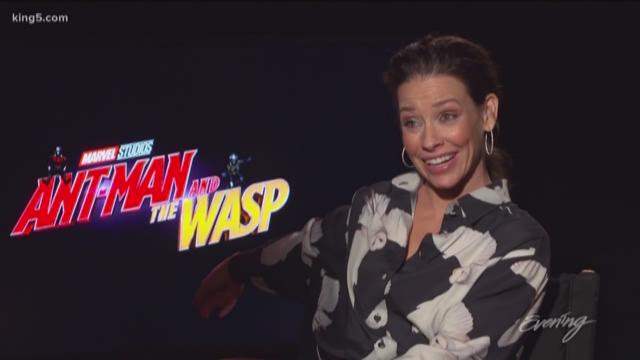 LOS ANGELES — One of the summer's biggest movies is also its smallest.

Ant-Man is back. And this time, fighting evil is a team sport. In Ant-Man and the Wasp, Paul Rudd is joined by Evangeline Lilly, who makes a buzz by playing the first female character ever featured in the title of a Marvel film.

As in the original film, mind-blowing flashback scenes turned back the clock for 73-year-old Michael Douglas, who appears 30 years younger thanks to digital effects.

"I've been thinking about a side business on that," Douglas says. "You could have careers going on now for 80 or 100 years.

No special effects allowed when it came to getting into superhero shape.

Paul Rudd says, "It takes a lot of work to do these Marvel movies, in many ways."

Co-star Hannah John-Kamen agrees. "The training's tough, and it kind of keeps you in the moment, like yeah, I'm feeling tough. I'm feeling strong."

One of the benefits of starring as a size-shifting superhero is you get your own action figure.

"I have a few of those," Evangeline Lilly, who plays The Wasp, says. "I don't have them out on a mantle or something in my house. Should I play with them?"

"Having an action figure is pretty great," Rudd says. "But you know what I think is even cooler is having a Lego figure."

See these movie star action figures in the flesh and on a screen near you in Ant Man and the Wasp. Tiny heroes. Huge fun.