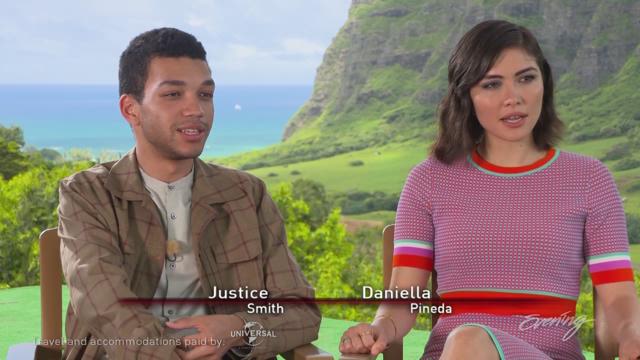 He plays a computer hacker and she plays a dinosaur doctor.

Kim Holcomb talked to the actors on the set in Hawaii about appearing in their first blockbuster movie.

HOLCOMB: "You are as old as the original film, is that right?”

HOLCOMB: “Younger than the original film? I'm going to go put my dentures in.”

PINEDA: “I know, how cool is that job title? I worked with two vets to prepare for the movie, on how to suture - I worked with a veterinarian in London who worked on African reptilian wildlife."

HOLCOMB: "Were any of the scenes you did with Chris (Pratt) improvised?"

PINEDA: "I mean, Chris is the master of American humor and I think J.A. (Bayona) was like, 'I got the drama, I got the tone, I got the mysticicsm, and you have the light element,' and they really made it a dance."

SMITH: "Oh the bug spray thing, that was Chris's idea."

HOLCOMB: "For you to squirt yourself with lots of bug spray?"

HOLCOMB: "Anyone who's seen Jurassic Park knows this area. Is that just such a surreal feeling to be like, ‘Oh, I'm in this now’?"

HOLCOMB: "It is so stunningly beautiful.”

HOLCOMB: “And windy. A little humid.”

PINEDA: "You're sticky all the time.”

SMITH: “But I will say there's a scene we shot on a hill right over there where we had to run down and things are exploding, there's smoke and fire and tar and all this crazy stuff. I would be exhausted and I would just look up at the view and it would give me this new-found energy. Because it has that effect on you.”

PINEDA: “You're reminded of what you're doing and where you are.”

SMITH: “Yeah even when you're in the trenches of it all, with the mosquitoes, it's still so beautiful, you're like, ‘I'll take it!’"