Ron Villanueva of Virginia Beach will serve more than two years in prison after pleading guilty to a federal charge to defraud the U.S. government. 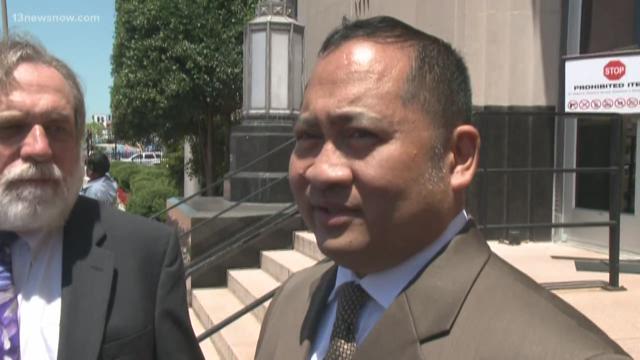 VIRGINIA BEACH, Va. — A former state delegate who pleaded guilty to a federal charge of conspiracy to defraud the United States has turned himself in to begin serving a two-and-a-half-year prison sentence.

According to the Federal Bureau of Prisons, Ron Villanueva is in custody at a low-security federal correctional institution in Petersburg.

Villanueva, 49, had faced several federal charges surrounding an alleged bid-rigging scheme, but as part of his plea agreement, all charges were dropped except for the one guilty plea to defrauding the government out of $80 million.

Villanueva served as a member of the 21st District in the House of Delegates from 2010 to 2018. He also served as a Virginia Beach City Council member before that.

"Here I am. I've been held accountable for these things, and I look forward to doing my time and just coming out at the end and being a better person and continue helping people,” Villanueva said after being sentenced last month.

According to court documents, Villanueva participated in a nine-year conspiracy involving over $80 million in fraudulently obtained government contracts. More specifically, Villanueva conspired with others to help two Virginia Beach companies secure Small Business Administration contracts that had been set aside for minority-owned businesses.

“We are defined by our maker and not defined by our mistakes, and this was a great mistake on my part...I am just hopeful that I can make amends and be productive again," Villanueva said.

Villanueva had until 3 p.m. Friday, August 16 to report to authorities. After he finishes his sentence, he will serve three years’ probation and will have to pay $524,533.