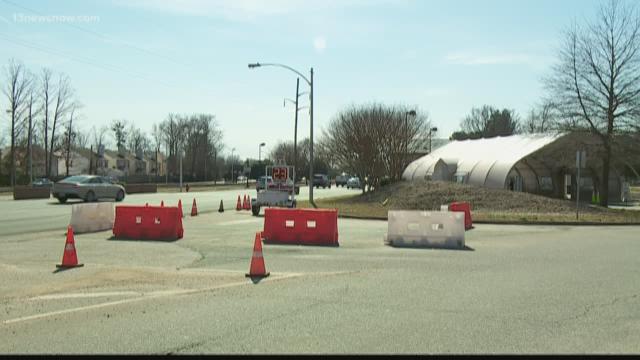 NEWPORT NEWS, Va. (WVEC) --It's a force protection issue for Fort Eustis, and the Army is turning to the General Assembly for help.

Newport News Delegate Mike Mullin has submitted a $700,000 budget amendment for a 30-acre land purchase. Mullin's bill said the acquisition would help Eustis "comply with the anti-terrorism and force protection standards of the United States Army."

Without providing specific details, a Joint Base Langley-Eustis spokeswoman, told 13 News Now, "Currently the main gate does not comply with the requirements."

The Langley-Eustis spokeswoman said, "The land purchase would provide sufficient space to fully complete a primary entry control facility" and it would "provide a buffer between military operations and the adjacent industrial park."

"Right now, I put in a budget amendment to make sure that we can start that process of purchasing the land to get the routes coming in and out of Fort Eustis on a regular basis, and that's something that's a big priority for me to be able to protect our military right here on the Peninsula," said Mullin.

The 8,300-acre Fort Eustis is home to nearly two dozen commands, including the U.S. Army Training and Doctrine Command and the 7th Transportation Brigade.

It houses 22,000 service personnel, family members, and civilians. A total of 5,000 soldiers train at the base annually, and, together with Langley Air Force Base, contributes an estimated $2.4 billion to the region's economy.

"One of the things we are always concerned about is the base realignment commission that's going to be coming, probably next year.," said Mullin. "We want to do make sure that we are as prepared as possible so that we let the federal government know that we are ready to keep the Fort Eustis alive and growing as much as possible."

Of course, it's not over until it's over. The General Assembly is still hammering out final details on the state budget. The session is scheduled to wrap up this Saturday.

And there is a precedent for the Commonwealth pitching in to protect a local military installation. In 2005, after the Base Realignment and Closure (BRAC) commission voted to realign Naval Air Station Oceana in Virginia Beach, the General Assembly voted to spend $10 million annually to roll back residential and commercial encroachment around the master jet base.