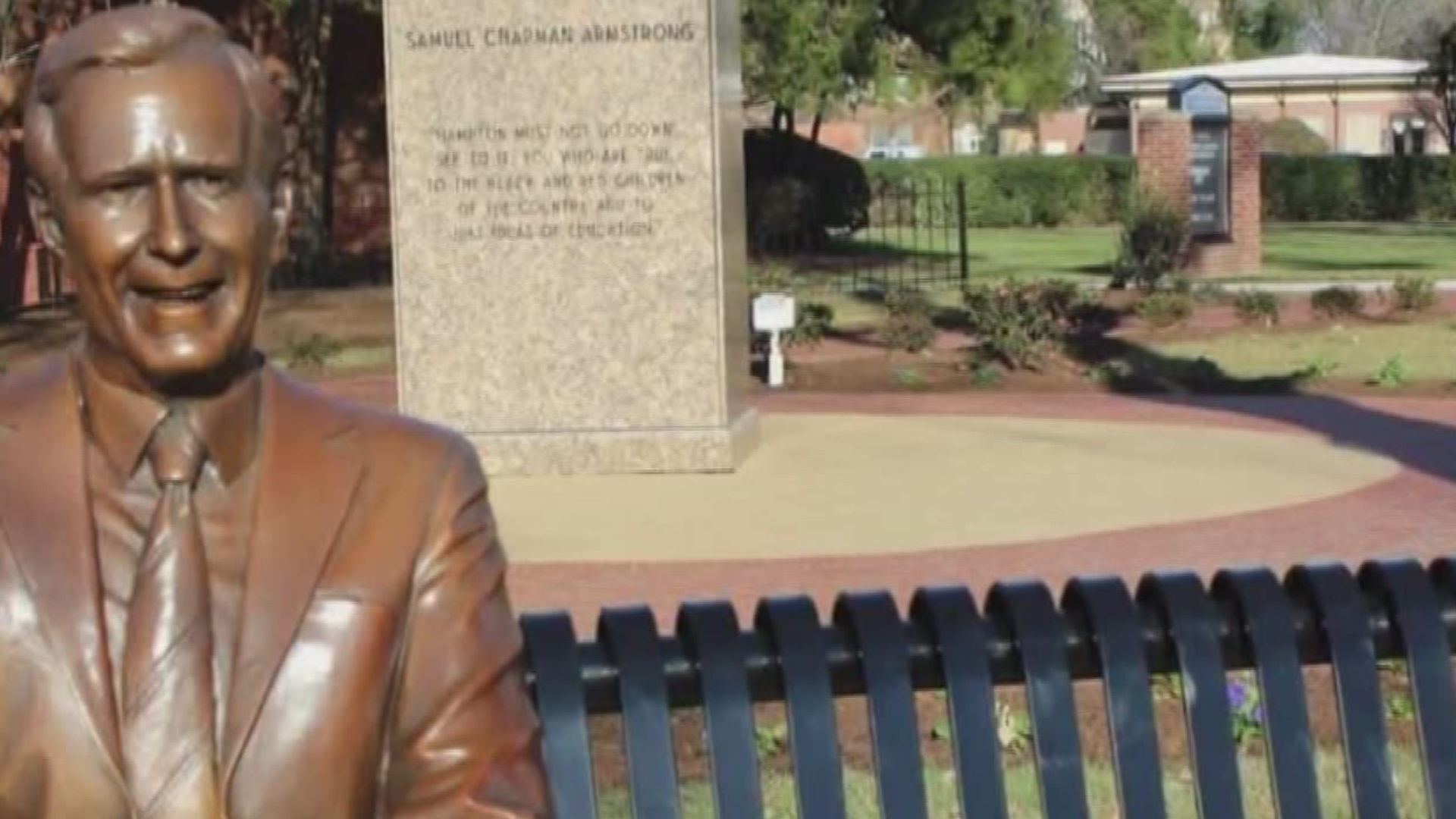 HAMPTON, Va. — A new feature on the campus of Hampton University is stirring up a lot of conversation.

The university unveiled 'Legacy Park' over the weekend. The statues in the park represent members considered part of the Hampton family, as well as friends, who have studied, worked and demonstrated support of Hampton’s mission of academic excellence.

Some students, like Kyra Robinson, are questioning some other statues like one of President George H.W. Bush.

“I just feel like a lot of his policies did harm to black people," said Robinson. "I just feel like as an HBCU we should definitely be uplifting more black figures than putting like William Taft and George H.W. Bush on our campus."

Robinson said she was also concerned about how the figures represented in Legacy Park were chosen and what funds were used to pay for the statues.

“How did we pick the people? How did this go about with planning? Who was voting to pick these people?  I just thought ok we can have a statue of Harvey he’s been here for a longtime and he’s done a lot of the campus but why are we putting all these people right here," said Robinson "If they are going to put money towards these kinds of things like Legacy Park they should definitely think about putting money first towards facilities like MLK."

President Bush's contributions to Historical Black Colleges and Universities are highlighted on Hampton's website with the other notable figures.

Hampton University Junior Randall Williams said the campus community should have been more informed about the statues before they were unveiled.

“I knew that statues were coming based on the construction, but I didn’t know who it was going to be. In order to bridge the connection between students and the administration, I think that should definitely be cleared up," explained Williams. "Because some of those statues are definitely deserving but when you have someone like George H.W. Bush, who is honorable do not get me wrong he is honorable, but as far as the other people up there and what they mean to the campus I think that students and alumni deserve an explanation,” said Williams.

13News Now received the below statement from B. Da’Vida Plummer, the spokeswoman for Hampton University, about the statue controversy:

"Legacy Park pays tribute to 13 iconic individuals who have supported Hampton University’s mission of providing high-quality academics and the development of character in all who are and have been associated with this great institution.  This is a noteworthy group of men and women, Black, White, and Native American, who hail from all walks of life—Dr. Martin Luther King, Rosa Parks, William Howard Taft, Mary Jackson, Barack Hussein Obama, Susan B. La Flesche, Mary Peake, George H.W. Bush, Jerome Holland, Reuben Burrell, Frederick Douglas, Dr. William R. Harvey and General Samuel Chapman Armstrong.  The privately funded park, commissioned by Hampton University’s Board of Trustees, recognizes the significant support from all who are represented and it will be visited and enjoyed for generations.

Legacy Park was commissioned by the Hampton University Board of Trustees. It is located between Hampton’s noted historical landmarks, Memorial Church and Ogden Hall, and faces the campus' scenic waterfront.