You'll find important information about coronavirus cases as well as impacts that COVID-19 is having on life in Hampton Roads and in northeastern North Carolina. 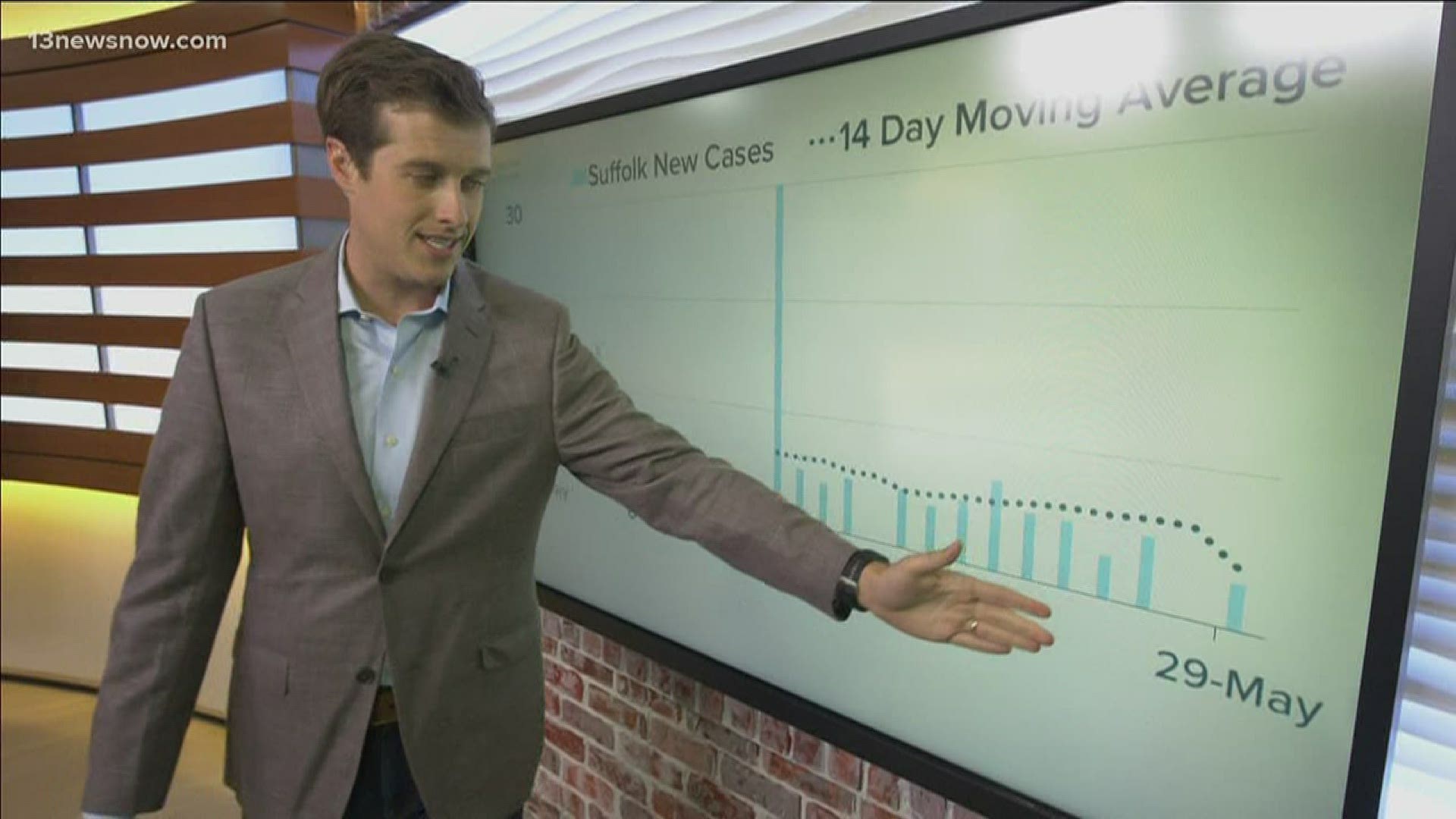 Newport News Shipbuilding confirmed another COVID-19 case at its shipyard on Friday.

That brings the total number of cases at the shipyard to 59. Thirty-five NNS employees have been medically cleared to return to work.

Here's the information on the latest case:

The Norfolk Harborfest is going virtual.

Since the festival can't be held in the traditional way, Norfolk FestEvents announced that the 44th Harborfest events will be held digitally from Friday June, 5 to Sunday, June 7.

So far, the state has run 391,231 tests and this morning, was helping 680 virus-affected in state hospitals. Since the outbreak began, there have been 26,488 confirmed cases and 859 deaths in North Carolina.

Today, the state is reporting about a 9 percent positivity rate among tests. That's up from Thursday's 8 percent.

As of this Wednesday, North Carolina had 250 contact tracers on the job, figuring out how people currently infected had caught or potentially spread the new virus.

It's the fourth jump of more than 1,000 cases reported in a day since Sunday.

Virginia has processed 296,321 tests, and is reporting a 13.4 percent positivity rate for tests received in the last week.

So far, Virginia hospitals have treated 4,497 people for confirmed cases of the virus.

There have been only two instances of MIS-C in Virginia children - a number that's held steady since Monday.

Governor Northam didn't start his regular coronavirus press briefing with updates on state efforts to fight the outbreak, but with some remarks on the Virginia Beach mass shooting.

Northam listed off the names of all 12 victims before asking for a moment of silence to mark the one-year anniversary, which is on Sunday.

He also urged victims to wear blue this weekend to honor the victims.

As for coronavirus updates, Northam said that parts of Virginia including Accomack County, northern Virginia and Richmond will enter Phase One of the Forward Virginia reopening plan starting Friday, May 29.

The rest of the state will continue Phase One for at least another week before entering Phase Two.

That's also when Virginia's face covering order begins. Northam said a face mask doesn't have to be high-end and that you can make them online or just cover your face with a bandana.

Also on Friday, all public beaches in Virginia can reopen for recreational activities, with some restrictions still in place.

The governor also relayed some data on the virus, saying that positive tests continue to trend downward and that testing capacity is increasing. Northam also intends to get tested himself.

Racing venues and tracks that host NASCAR and horse races can also open for single-day events. However, no spectators will be allowed at these events. This announcement comes before a NASCAR race in Martinsville on June 10.

The federal government also extended the National Guard's stay in Virginia under Title 32 to continue helping with pandemic response efforts.

Northeastern North Carolina was up to 532 cases.

By Tuesday, the state health department was reporting about an 8 percent positivity rate for tests.

This morning, 708 people were in hospitals being treated for the virus.

On Thursday, the Virginia Department of Health reports 39,393 confirmed cases and 1,236 confirmed deaths related to COVID-19.

That's more than 1,100 confirmed new cases as of yesterday.

The total cases (which include probable cases) are 41,401. The total number of deaths (including probable deaths related to the new virus) is 1,338.

More than 4,000 people are hospitalized. More than 285,000 Virginians have been tested so far.

North Carolina health officials have updated today's coronavirus case count. In total, there are 24,628 cases in the state. That's an increase of 488 cases from Tuesday.

As for the death toll, it currently stands at 794, up 28 deaths from Monday. More than 700 people are hospitalized.

There are 528 cases in northeastern North Carolina.

On Wednesday, 275,074 people had been tested, and the state was reporting about a 13.9 percent positivity rate among people tested in the last week.

So far, 4,351 Virginians have been hospitalized for the virus.

Governor Northam made the announcement during a regular coronavirus briefing. Northam insisted that people wear face coverings in stores, barbershops, restaurants, city buildings, on public transportation or anywhere where people can congregate.

The governor also addressed his visit to the Virginia Beach Oceanfront over Memorial Day weekend which drew heavy criticism.

"Some well-wishers came up to me and asked to take pictures. My mask was in the car," the governor said. "I take full responsibility for that. People held me accountable and I appreciate that."

Northam says he'll be more careful when he's out in public in the future.

Trends in health metrics are also "directionally correct" according to Northam. Percent positivity is downward, testing is increasing and hospital capacity remains sufficient.

"Numbers are trending in the right direction," Northam said.

Northam also spoke to chief elected officials in Accomack County, who told him they believe the county is ready to enter Phase One of the Forward Virginia reopening plan. State officials have previously reported that Accomack County is supposed to start Phase One on May 28.

Northeastern North Carolina was up to 517 cases today.

The state has gotten test results for 352,331 people so far, and its test positivity rate is about 8 percent.

Tuesday, 621 people were hospitalized for treatment in the state's hospitals.

Testing has increased since the early stages of the outbreak. On Tuesday, 265,279 people had been tested, and the state was reporting about a 14.1 percent positivity rate among people tested in the last week.

So far, 4,294 Virginians have been hospitalized for the virus. The state was up to two cases of MIS-C, both in Fairfax county, and that number has not increased since yesterday.

This afternoon, the Virginia Department of Health gave some context to its high number of newly reported cases.

"VDH performed maintenance on its disease reporting system yesterday," a spokesperson wrote. "COVID-19 data reported during that time were added to today's numbers."

Right now, it's unclear how many of the 1,439 new cases reported Monday should have been reported on Sunday.

Today, North Carolina's health department reported there have been 23,964 confirmed cases and 754 deaths related to coronavirus so far.

Six-hundred-twenty-seven people were in North Carolina hospitals for coronavirus treatment Monday morning, an uptick from past weeks, which averaged hospitalization numbers in the 500-range.

The state health department was showing about an 8 percent positivity rate among tests reported in the last two weeks. It's tested 344,690 people so far.

The state also added a new area to report cases of Multisystem Inflammatory Syndrome in Children (MIS-C). Virginia is reporting two cases of MIS-C, both in Fairfax County.

RELATED: VERIFY: Are farmers getting paid less even as retail milk prices go up?

On Sunday, Virginia Department of Health reports 34,451 confirmed cases of coronavirus in the state and 1,135 COVID-19 deaths so far.

The health department has tested 242,292 people for active cases.

In Virginia, 4,185 people have been hospitalized for the treatment of confirmed cases of the new virus.

RELATED: VERIFY: No, the government will not track your transactions if you use stimulus debit cards

The Virginia Department of Health reports 33,962 confirmed cases of coronavirus in the state and 1,123 COVID-19 deaths so far.

The health department has tested 230,683 people for active cases.

In Virginia, 4,153 people have been hospitalized for the treatment of confirmed cases of the new virus.

On Friday afternoon, Virginia Governor Ralph Northam held a brief news conference in which he continued to encourage social distancing and wearing masks in public places, ahead of Memorial Day Weekend.

He said people need to be safe, even during the holiday - and he also reminded members of the Muslim community to keep social distancing guidelines at the forefront of their minds while celebrating the end of Ramadan this weekend.

Virginia will be lowering state flags to half-mast to honor people who have died from COVID-19.

"They are our friends and our neighbors, and they leave behind families who love them, and we all mourn their loss," Northam said.

He said next week, he would share more details about Northern Virginia, Accomack County and Richmond moving to "phase one" and the rest of the state moving to "phase two" of the Forward Virginia reopening plan.

Northam said the state health department was launching a new online tool called CovidCheck to help advise people on next steps for the symptoms they're experiencing. The governor said you could answer questions about your health, and the website could help tell you if you need to isolate or get tested.

Virginia has been approved to expand SNAP services to include online grocery orders and deliveries, Northam said. Starting May 29, as part of the pilot program, people who get food assistance from the state should be able to order groceries from Amazon and Walmart.

Northam said 44,000 people had filed for unemployment in the last week, and in response to problems people were having getting benefits, the state government was opening up a new call center with 315 more employees to help handle new claims.

The governor encouraged the class of 2020 to send in photos, videos and messages to Virginia Public Media for a special program, "Virginia Graduates Together," that will air on television and online next Friday.

"I am sorry that graduates across Virginia will not get to commemorate this achievement with their friends and their families," Northam said.

He said submitting memories by Sunday would help the program put together a memorable virtual ceremony for graduates, and hinted that there would be a special guest speaker who will address Virginia's graduates in the unique broadcast.

Friday, the North Carolina Department of Health and Human Services said there had been 21,618 confirmed cases and 728 deaths related to confirmed cases in the state so far.

In all, the state has tested 313,224 people and is showing about a 9 percent positivity rate over tests reported in the last two weeks.

The most recent update reflected 708 more cases and 12 more deaths reported since Thursday.

Today, 568 people were in North Carolina hospitals being treated for the virus.

Today, the Virginia Department of Health reported that there's been 33,208 confirmed cases of coronavirus in the state and 1,100 COVID-19 deaths so far.

The health department has tested 223,433 people for active cases, and in the seven days, the positivity rate among those tests is about 14.7 percent.

In Virginia, 4,117 people have been hospitalized for treatment of confirmed cases of the new virus.

Most of the cases came from outbreaks at long term care facilities, congregate settings and correctional facilities, according to data from the department's COVID-19 dashboard.