Citing new – but unreleased -- info about the delta variant’s ability to spread among vaccinated people, the CDC changed its masking guidelines this week. 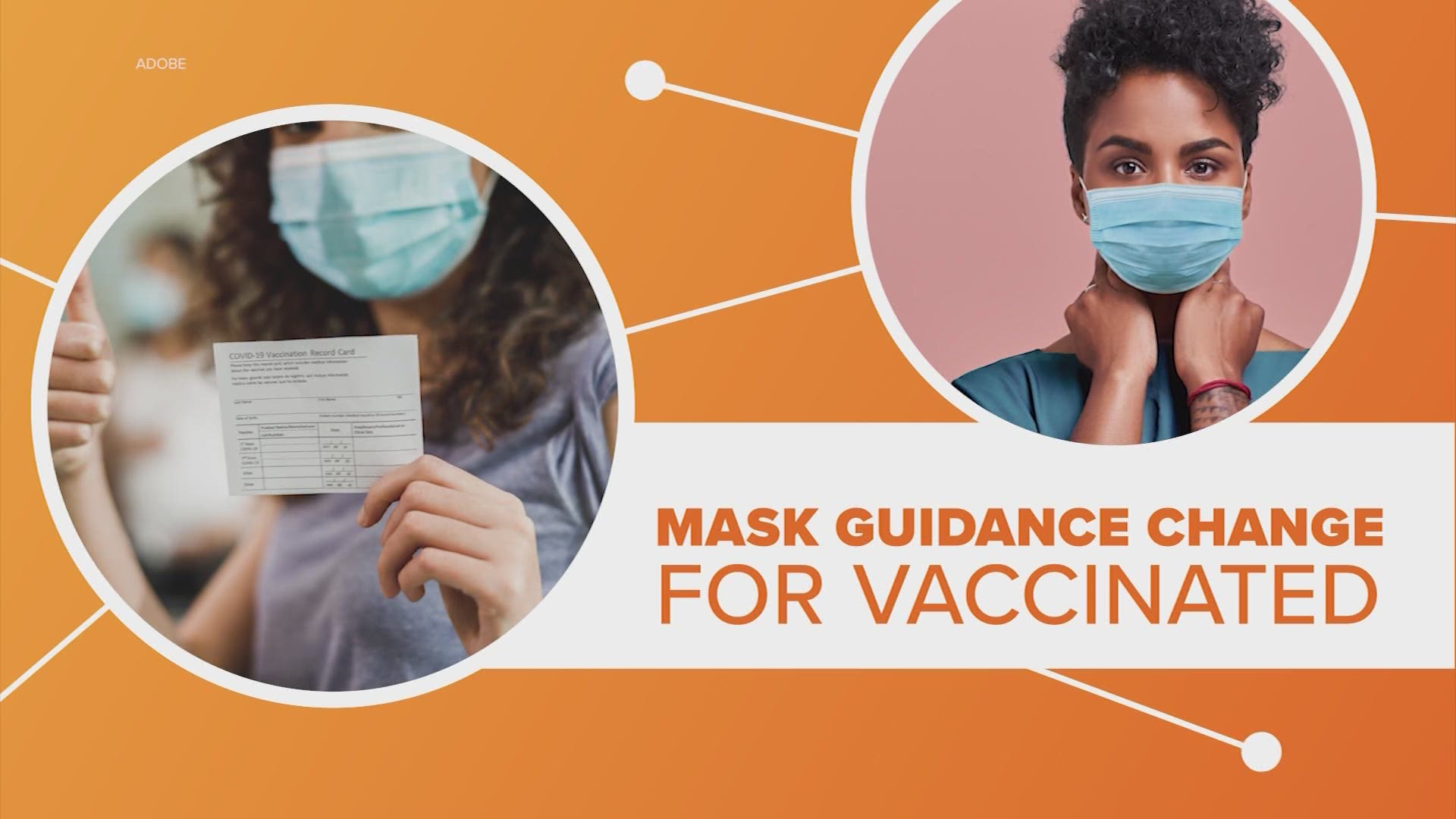 WASHINGTON — In another dispiriting setback for the nation’s efforts stamp out the coronavirus, scientists who studied a big COVID-19 outbreak in Massachusetts concluded that vaccinated people who got so-called breakthrough infections carried about the same amount of the coronavirus as those who did not get the shots.

Health officials on Friday released details of that research, which was key in this week's decision by the Centers for Disease Control and Prevention to recommend that vaccinated people return to wearing masks indoors in parts of the U.S. where the delta variant is fueling infection surges. The authors said the findings suggest the CDC's mask guidance should be expanded to include the entire country, even outside of hot spots.

The findings have the potential to upend past thinking about how the disease is spread. Previously, vaccinated people who got infected were thought to have low levels of virus and to be unlikely to pass it to others. But the new data shows that is not the case with the delta variant.

The outbreak in Provincetown — a seaside tourist spot on Cape Cod in the county with Massachusetts’ highest vaccination rate — has so far included more than 900 cases. About three-quarters of them were people who were fully vaccinated.

Travis Dagenais, who was among the many vaccinated people infected, said “throwing caution to the wind” and partying in crowds for long nights over the July Fourth holiday was a mistake in hindsight.

“The dominant public messaging has been that the vaccine means a return to normal,” the 35-year-old Boston resident said Thursday. “Unfortunately, I’ve now learned it’s a few steps toward normal, not the zero-to-sixty that we seem to have undertaken.”

Dagenais credits being vaccinated with easing the worst of the flu-like symptoms in a couple of days. He has recovered.

Like many states, Massachusetts lifted all COVID-19 restrictions in late May, ahead of the traditional Memorial Day start of the summer season. Provincetown this week reinstated an indoor mask requirement for everyone.

Leaked internal documents on breakthrough infections and the delta variant suggest the CDC may be considering other changes in advice on how the nation fights the coronavirus, such as recommending masks for everyone and requiring vaccines for doctors and other health workers.

The delta variant, first detected in India, causes infections that are more contagious than the common cold, flu, smallpox and the Ebola virus, and it is as infectious as chickenpox, according to the documents, which mentioned the Provincetown cases.

The documents were obtained by The Washington Post. As they note, COVID-19 vaccines are still highly effective against the delta variant at preventing serious illness and death.

The Provincetown outbreak and the documents highlight the enormous challenge the CDC faces in encouraging vaccination while acknowledging that breakthrough cases can occur and can be contagious but are uncommon.

The documents appear to be talking points for CDC staff to use with the public. One point advised: “Acknowledge the war has changed,” an apparent reference to deepening concern that many millions of vaccinated people could be a source of wide-ranging spread.

An agency spokeswoman declined to comment on the documents.

The White House on Friday defended its approach to rising virus cases and shifting public health guidelines, repeatedly deferred to the CDC while stressing the need for vaccinations.

Pressed about the changing guidance, Jean-Pierre repeatedly said, “We don’t make those types of decisions from here.”

People with breakthrough infections make up an increasing portion of hospitalizations and in-hospital deaths among COVID-19 patients, coinciding with the spread of the delta variant, according to the leaked documents.

Although experts generally agreed with the CDC’s revised indoor masking stance, some said the report on the Provincetown outbreak does not prove that vaccinated people are a significant source of new infections.

The CDC report is based on about 470 COVID-19 cases linked to the Provincetown festivities, which included densely packed indoor and outdoor holiday events at bars, restaurants, guest houses, and rental homes.

Three-quarters of the infections were in fully vaccinated individuals. Among those fully vaccinated, about 80% experienced symptoms with the most common being cough, headache, sore throat, muscle aches and fever.

Dagenais said he started to feel ill the evening he returned home and initially chalked it up to long nights of partying in packed Provincetown nightclubs.

But as the days wore on and the fever, chills, muscle aches and fatigue set in, he knew it was something more.

In the report, the measure researchers used to assess how much virus an infected person is carrying does not indicate whether they are actually transmitting the virus to other people, said Dr. Angela Rasmussen, a virologist at the University of Saskatchewan.

CDC officials say more data is coming. They are tracking breakthrough cases as part of much larger studies that involve following tens of thousands of vaccinated and unvaccinated people across the country over time.

The Associated Press Health and Science Department receives support from the Howard Hughes Medical Institute’s Department of Science Education. The AP is solely responsible for all content.