The first shipments of Pfizer's COVID-19 vaccine arrived in states across the U.S. on Monday. 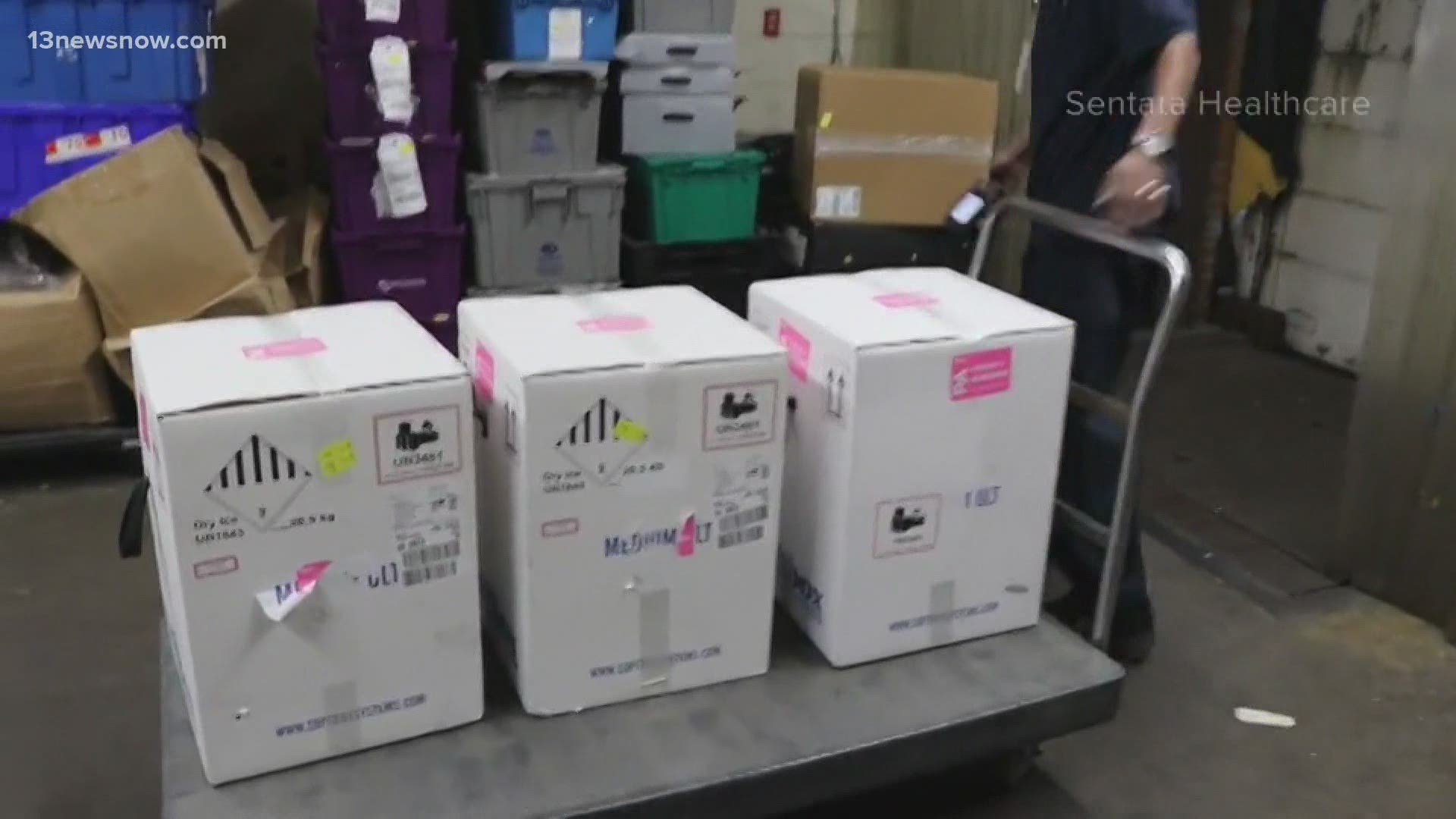 NORFOLK, Va. — On Monday morning, the first doses of Pfizer's COVID-19 vaccine were being shipped out around the country. It wasn't long before doses started arriving in Hampton Roads and North Carolina.

Sentara Healthcare officials confirmed the hospital system got its first shipment of the 11,700 doses of the Pfizer COVID-19 vaccine around 7 a.m. via FedEx.

While the vaccine is not mandatory, Morin said the majority of Sentara workers expressed interest in receiving it, when surveyed internally.

“The vaccine is voluntary. It’s optional. Staff will choose to get the vaccine or not. It is not mandated," Morin said. “We had a very high percentage – I’m thinking it was about 80 to 85 percent said they would take the vaccine when available to them.”

That still leaves about 20 to 15 percent of Sentara workers who said they wouldn’t get the vaccine, but Chief Pharmacy Officer Tim Jennings said he expects that number to rise, and 85 percent is still a good turnout.

“Herd immunity usually occurs when you’re over 60 to 75 percent, so if we get a good 80 plus percent of our healthcare employees, then we’re contributing very well to the overall immunization," he said.

“We will be very close," Jennings said. "It should take one more shipment, partial shipment, to get us through.”

North Carolina's Governor Roy Cooper announced around 9:45 a.m. that North Carolina has received its first shipment of the COVID-19 vaccine.

In the tweet, Gov. Cooper said "it’s a limited supply for now, but this is a remarkable achievement for science and health."

The first doses of COVID-19 vaccine have arrived in North Carolina. It’s a limited supply for now, but this is a remarkable achievement for science and health. We all need to keep wearing a mask and acting responsibly while we get as many people vaccinated as fast as we can.

Riverside Regional Medical Center officials said they are expecting just under 3,000 vaccine doses to be delivered, this week.

Vice president and chief pharmacy officer Cindy Williams also acknowledged, there won’t be enough doses for everyone, at first.

“The plan this week is that all hospitals in the state of Virginia that are receiving the initial distribution should have delivery by mid to late this week," Williams said.

“It won’t be enough for everyone. We know that upfront. We’re going to be getting just under 3,000 doses with the initial shipment and of course, we will need to divide that up across the health system.”

But like Sentara, they are expecting more in the coming weeks.

“I think as we get additional shipments of vaccine, I do think we’ll have enough for our entire team but we don’t have the details around that second allocation quite yet. I think we’ll get that in the next couple of days," she said.

Sentara said they expect to receive the first shipment of the Moderna vaccine, next Monday.

Governor Ralph Northam announced on Twitter at 2:45 p.m., that the first shipments of the Pfizer COVID-19 vaccine arrived safely in Virginia.