Daniel Uhlfelder's scythe-wielding persona is his way of speaking out against "misinformation and warn people about the dangers of COVID-19." 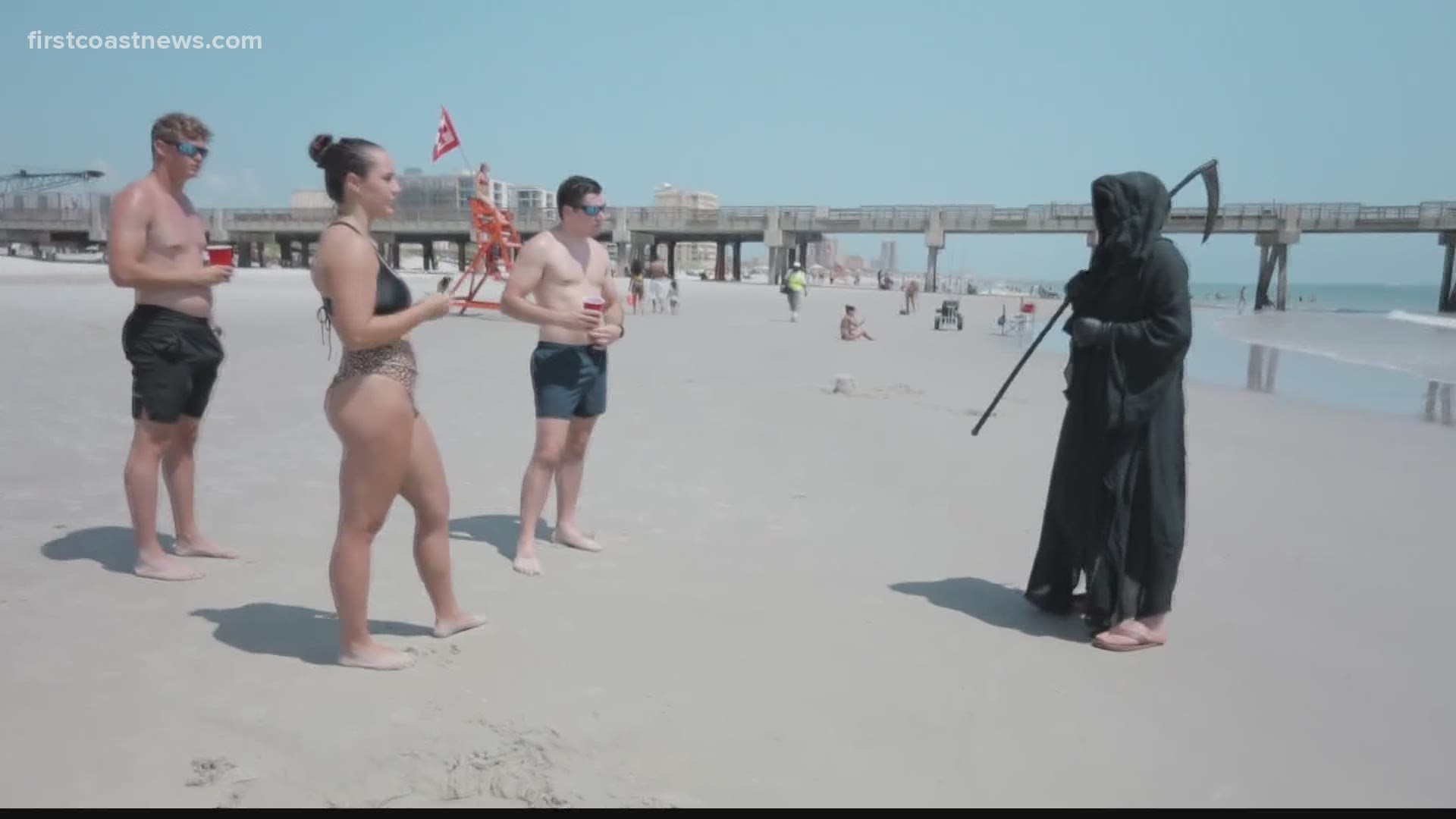 JACKSONVILLE BEACH, Fla. — Beachgoers hoping to kick off their Fourth of July weekend early received a rather morbid sight at Jacksonville Beach on Friday.

Those who hit the shores not only witnessed the sights and sounds of the waves, but they were also greeted by none other than the Grim Reaper.

Daniel Uhlfelder, an attorney based in Santa Rosa Beach, Florida, donned on the garb of the symbol of death as a way to spread awareness that Florida is still battling the deadly coronavirus, despite the state's phased reopening.

"I talked to some millennials in their 20s who wanted to talk about why I was doing this, why they may disagree with certain parts of it," he told First Coast News.

Friday's stop was part of his "Florida Grim Reaper Tour," which he launched back in May around Phase 1 of reopening. He started in the Florida Panhandle to beaches all over South Florida.

According to his Twitter page, Uhlfelder's scythe-wielding persona is his way speaking out against Gov. Ron DeSantis' handling of the global pandemic, as well as his attempt at fighting "misinformation and warn people about the dangers of COVID-19 as Florida becomes [an] epicenter."

"I tried a social media campaign, I tried suing the governor to close the beaches and do a stay at home order," he said.

"We have to take this into our own hands, unfortunately, because our leaders aren't doing the right thing," Uhlfelder told USA Today back in May.

At Jacksonville Beach -- which is one of the many beaches in the First Coast area that will remain open for July 4 -- some beachgoers were not happy to see Uhlfelder out and about.

Uhlfelder told First Coast News that the police had to intervene in a dispute between him and another man per his request.

"I had a very good open discussion with a lot of people, but then there are some detractors that are just trolls," he said. "But they don’t bother me, so.”

Florida has seen a growing trend of positive COVID-19 cases with numbers surpassing the state's initial peak back in April. Over the past two weeks alone, July 2 marked the 10th straight day where the number of newly reported coronavirus cases was more than 5,000.

In Duval County, specifically, 7,961 positive cases of COVID-19 were reported Friday, along with 68 deaths and 377 hospitalizations.

"Jacksonville Beach was filled with misinformation based on my conversations today," he tweeted. "We have a lot of work to do."