Cooper said while it's good to see our numbers are decreasing and stabilizing, they remain too high. 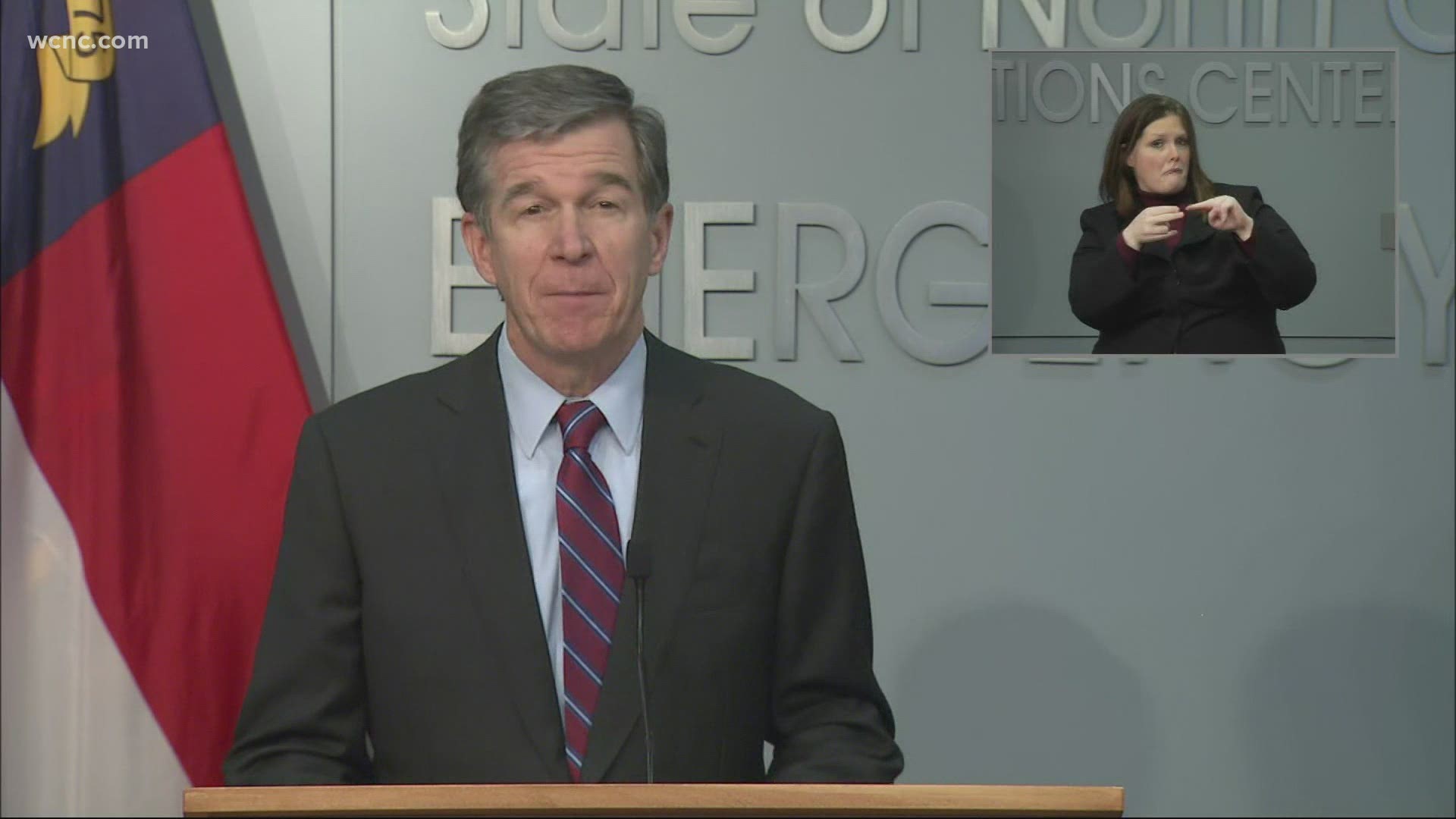 CHARLOTTE, N.C. — Governor Roy Cooper announced Wednesday that he is extending the state's modified stay at home order until Feb. 28.

Cooper's executive order requires all North Carolina residents to continue to wear masks in public and work from home unless essential, as well as a nightly curfew from 10 p.m. until 5 a.m. Residents are also asked to continue social distance, stay away from large gatherings and avoid anyone, outside of their family, who is not wearing a mask.

Cooper said while it's good to see our numbers are decreasing and stabilizing, they remain too high.

"We need to keep up our efforts to slow the spread of the virus," Cooper said.

North Carolina Department of Health and Human Services reported 5,587
new cases Wednesday. The positivity rate appears to be dropping, falling to 11.1%. That number is still more than double what health officials want, but it's down from nearly 15% earlier this month.

Dr. Mandy Cohen, secretary of NCDHHS, said North Carolina expected to exhaust all of its COVID-19 vaccine supply by the end of the day Tuesday. Cohen said she's hopeful that the state using up its backlog of vaccines will show the federal government North Carolina is ready to distribute a greater amount of vaccines. Multiple counties in the Charlotte area have limited or completely stopped accepting new appointments for vaccinations due to the limited supply.

RELATED: CDC says students should return to classrooms weeks before CMS is set to make decision

"I think we are making our strongest statement to the federal government that we can take on more vaccine and we need more vaccine," said Cohen.

Gov. Cooper announced Wednesday that the state has administered 99.8% of the first doses it has received from the federal government.

Cooper said this means he's hopeful that the state will receive more vaccine doses in the upcoming future.

Just yesterday, Cooper announced that the federal government will increase vaccine shipments to states by 16% over the next three weeks.

"That will help, but we still need much more," Cooper said.

The governor's order is aimed at keeping North Carolina's COVID-19 numbers down after the holidays. The state experienced a sharp rise in coronavirus hospitalizations and deaths over the holiday season, but numbers have started to fall, giving hope that Cooper won't extend the strict order.

"I do believe a couple of things are going on right now. Number one, we are seeing the decrease in the impact of the holidays," said Mecklenburg County Health Director Gibbie Harris. "As we get further away, we were hoping to see numbers come down, and we are seeing some of that."