The president-elect praised the health care workers and said President Donald Trump's administration “deserves some credit getting this off the ground.” 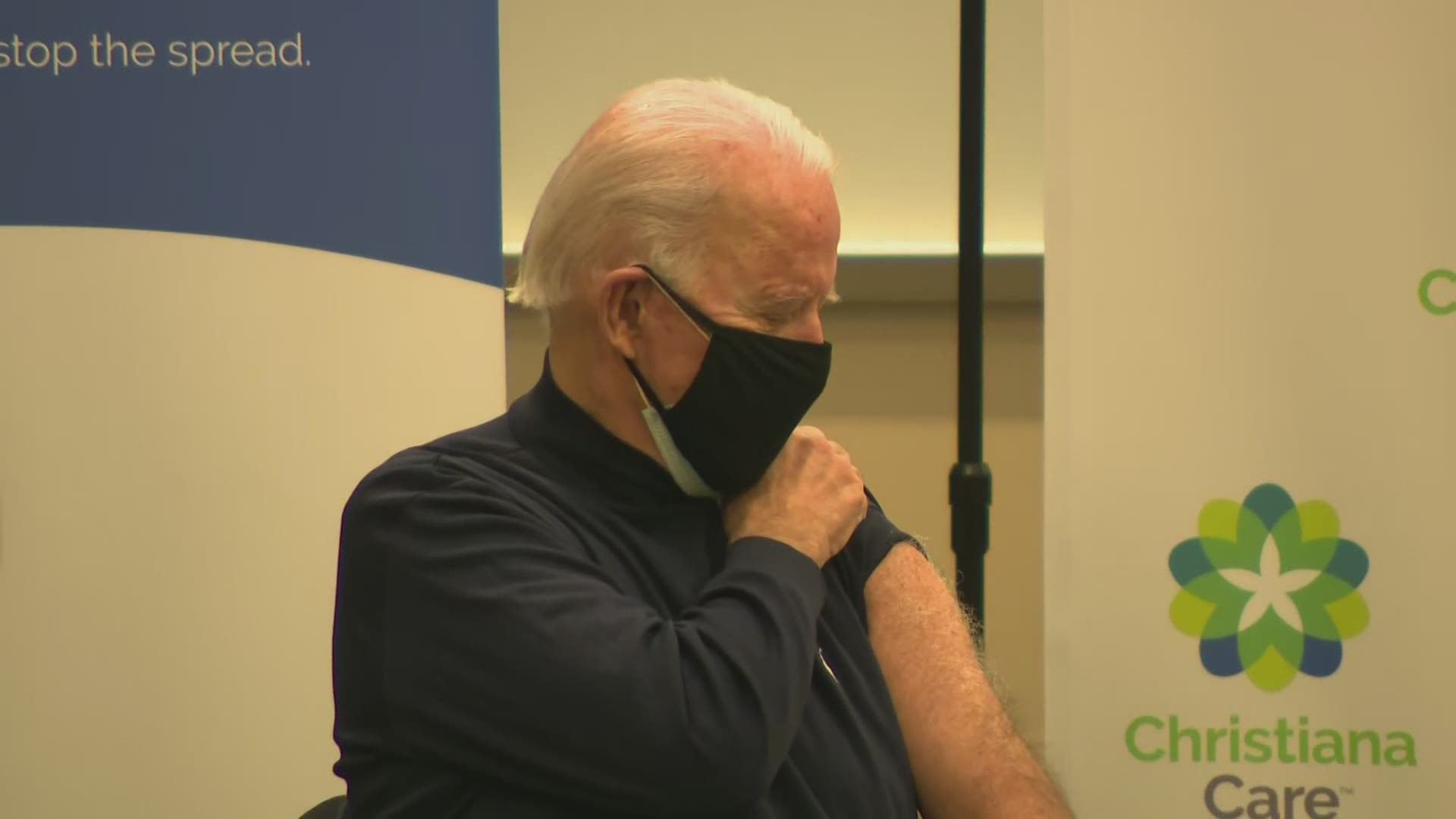 NEWARK, Del. — President-elect Joe Biden on Monday received his first dose of the coronavirus vaccine on live television as part of a growing effort to convince the American public the inoculations are safe.

The president-elect took a dose of Pfizer vaccine at a hospital not far from his Delaware home, hours after his wife, Jill Biden, did the same. The injections came the same day that a second vaccine, produced by Moderna, will start arriving in states. It joins Pfizer's in the nation's arsenal against the COVID-19 pandemic, which has now killed more than 317,000 people in the United States and upended life around the globe.

“I'm ready,” said Biden, who was administered the dose at a hospital in Newark, Delaware, and declined the option to count to three before the needle was inserted into his left arm. “I’m doing this to demonstrate that people should be prepared when it’s available to take the vaccine. There’s nothing to worry about.”

The president-elect praised the health care workers and said President Donald Trump's administration “deserves some credit getting this off the ground.” And Biden urged Americans to wear masks during the upcoming Christmas holiday and not travel unless necessary.

RELATED: Pelosi, McConnell get COVID-19 vaccine as it rolls out in Congress

Other top government officials last week joined the first wave of Americans to be inoculated against COVID-19 as part of the largest largest vaccination campaign in the nation's history.

Vice President Mike Pence, House Speaker Nancy Pelosi, D-Calif., Senate Majority Leader Mitch McConnell, R-Ky., and other lawmakers were given doses Friday. They chose to publicize their injections as part of a campaign to convince Americans that the vaccines are safe and effective amid skepticism, especially among Republicans.

Vice President-elect Kamala Harris and her husband are expected to receive their first shots next week.

But missing from the action has been President Donald Trump, who has spent the last week largely out of sight as he continues to stew about his election loss and floats increasingly outlandish schemes to try to remain in power. It's an approach that has bewildered some top aides who see his silence as a missed opportunity for the president, who leaves office Jan. 20, to claim credit for helping oversee the speedy development of the vaccine and to burnish his legacy.

Trump, who in the past has spread misinformation about vaccine risks, has not said when he intends to get the shot. He tweeted earlier this month that he was “not scheduled” to take it, but said he looked “forward to doing so at the appropriate time.”

The White House has said he is still discussing timing with his doctors.

Trump was hospitalized with COVID-19 in October and given an experimental monoclonal antibody treatment that he credited for his swift recovery. A Centers for Disease Control and Prevention advisory board has said people who received that treatment should wait at least 90 days to be vaccinated to avoid any potential interference.

“When the time is right, I’m sure he will remain willing to take it,” White House spokesperson Brian Morgenstern echoed Friday. “It’s just something we’re working through.”

White House press secretary Kayleigh McEnany, however, offered a different explanation for the delay. She told reporters last week that Trump was holding off, in part, “to show Americans that our priority are the most vulnerable.”

“The President wants to send a parallel message, which is, you know, our long-term care facility residents and our frontline workers are paramount in importance, and he wants to set an example in that regard,” she said.

The CDC's Advisory Committee on Immunization Practices has said the Pfizer-BioNTech vaccine, which was the first to receive authorization, “is safe and likely efficacious" for people who have been infected with COVID-19 and “should be offered regardless of history of prior symptomatic or asymptomatic SARS-CoV-2 infection.”

While there is no recommended minimum wait time between infection and vaccination, because reinfection is uncommon in the three months after a person is infected, the committee said people who tested positive in the preceding 90 days "may delay vaccination until near the end of this period, if desired.”

The panel also recommends that those who received Trump's treatment put off vaccination for at least 90 days.

“Currently, there are no data on the safety and efficacy of Pfizer-BioNTech COVID-19 vaccination in persons who received monoclonal antibodies or convalescent plasma as part of COVID-19 treatment," they wrote, recommending that vaccination "be deferred for at least 90 days, as a precautionary measure until additional information becomes available, to avoid interference of the antibody treatment with vaccine-induced immune responses.”

Surgeon General Jerome Adams cited that recommendation on CBS’s “Face the Nation” on Sunday when asked if Trump planned to receive the shot on camera.

“From a scientific point of view, I will remind people that the president has had COVID within the last 90 days. He received the monoclonal antibodies. And that is actually one scenario where we tell people maybe you should hold off on getting the vaccine, talk to your health provider to find out the right time,” Adams said.

But others, including Dr. Anthony Fauci, the nation’s top infectious diseases expert, have recommended that Trump be vaccinated without delay.

“Even though the president himself was infected, and he has, likely, antibodies that likely would be protective, we’re not sure how long that protection lasts. So, to be doubly sure, I would recommend that he get vaccinated,” he told ABC News.

RELATED: People over 75, essential workers next in line for COVID-19 vaccine

RELATED: Are new coronavirus strains cause for concern?

RELATED: Second COVID-19 vaccine authorized in US is shipped out