Only 41% of second vaccine doses in North Carolina have been administered: 'We’re still catching up'

The state has administered more than 99% of first doses, but 41% of the second doses, per state data. The rate is even lower for long-term care facilities. 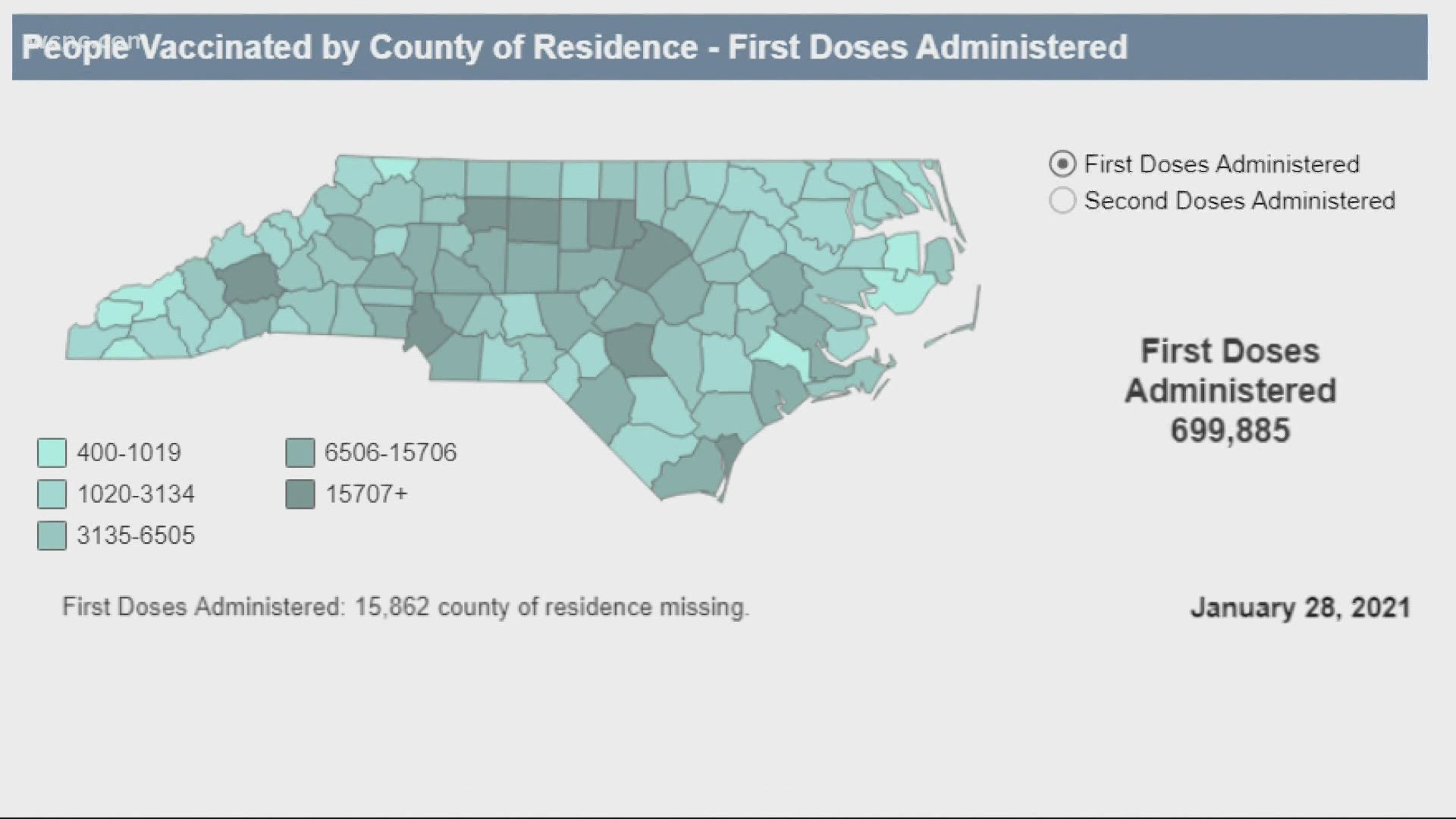 CHARLOTTE, N.C. — The Carolinas are trying to catch up with the second dose of the COVID-19 vaccine.

At Bojangles Coliseum, the Mecklenburg County Department of Public Health is running a vaccine clinic that includes first and second doses; the company, StarMed, is handling second doses.

County officials say most people schedule their second dose while getting their first dose. However, across the state, it’s taking time to see the progress, particularly at long term care facilities.

About four weeks after getting her first COVID-19 vaccine, resident Katherine Hillman is getting her second dose later this week at the Charlotte, a senior living community.

RELATED: VERIFY: If you get COVID-19 between vaccine doses, do you have to start the shots again?

“I’m looking forward to that because once we get the second one, we will feel so much better about the whole thing,” said Hillman.

“I think of the ones who originally got the first dose, they will all get the second dose,” said Leslie Workman, director of the Charlotte.

However, state data shows the progress takes time; only 10% of the second doses received by North Carolina for long term care facilities have been administered.  It’s done through a federal program in partnership with CVS and Walgreens.

Michelle Riese, a member of the state’s vaccine advisory committee, said one reason it takes time to administer the second dose is that allocations were based on a facilities’ capacity, not the actual number of people who live there.

“If a facility has room for 100 people to live there and there’s only 80 there right now, they still got an allocation based on the 100 people instead of the 80 people,” Ries said.

“We may have overstated the amount of people that were going to get vaccinated,” said Workman. “Assuming 100% participation, I wanted to make sure we were covered.”

Outside of long-term care facilities, 41% of the second doses received have been administered in North Carolina, state data shows. Ries said reshuffling priority groups, like those 65 and up, contributed to that because the first doses took longer than expected.

“We’re still catching up on people who are actually eligible for that second dose,” said Ries.

I wanted to give our viewers more info on the process for 2nd #CovidVaccine doses so I emailed @AtriumHealth , then jumped on their media presser. They let every other reporter ask a question but me- and when I tried to ask mine my mic was silenced @wcnc . pic.twitter.com/4IYIZPaGuG

Meantime, South Carolina health officials say they’ve received reports of providers canceling appointments for second doses.  Atrium Health and Novant Health both tell WCNC Charlotte they haven’t had to cancel any second dose appointments, which are made when patients get their first vaccine.

Hillman says she hopes others are as fortunate as she is.

“That’s my hope that everybody can get it,” said Hillman.