Under Maryland and Prince George's County guidelines, retail workers are not yet eligible for vaccines. 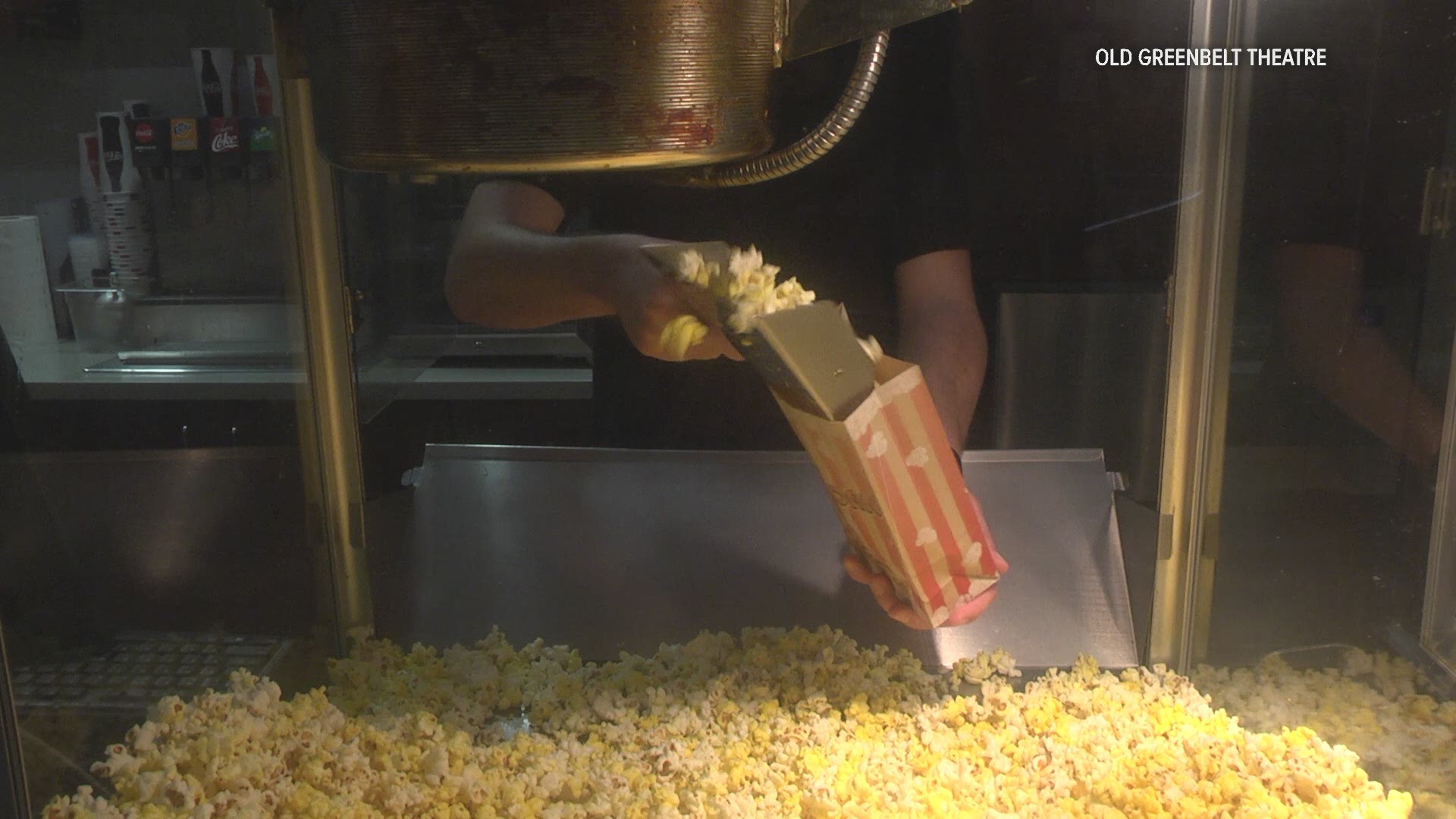 GREENBELT, Md. — The Old Greenbelt Theatre has been waiting for this moment for a full year -- Prince George's County Executive Angela Alsobrooks gave the green light to reopen at 50% capacity Friday.

“We're excited that we're at this point, you know," Executive Director Caitlin McGrath said. "Spring is coming, and folks are getting vaccinated. And it just feels like another sign of hope that we're coming to the end of all this.”

The theater became a non-profit in 2015 after originally opening in 1938. The pandemic forced McGrath to close the historic theater's doors on March 13, 2020.

"As a business, it's been challenging, but as an individual, I understand," she said.

McGrath said they've been able to stay open through community support and grant funding from the state of Maryland. She said they've also started hosting private events of less than 10 people in the 363-seat theater. And, in the summer, they hosted movie-watching events at the city's baseball diamond outside.

"That has helped us survive this pandemic and not worry so much about a solely financial motivation in our decision making about when we reopen," McGrath said.

RELATED: Prince George's County takes 'measured approach' to reopening, but not as much as the rest of Maryland

One year ago to the DAY, @TheOldGreenbelt closed its doors b/c of #COVID19.

The exec. dir. is excited but wants #vaccines for staff first. More on their plans on @wusa9 at 6. pic.twitter.com/E2oOzQTl9j

The biggest motivator is the safety of her staff and patrons.

She said they have an updated HVAC system and have adopted all the "Cinema Safe" practices, a national program pushing safety protocols developed by epidemiologists, but there's a missing piece -- vaccinations.

“I think it goes hand in hand that if you want to bring back business and support business, then you have to think about all the parts of that," McGrath said. "And that means it's important to make sure that retail workers are eligible for vaccination.”

Currently, retail workers are not eligible for vaccinations.

"We've always understood from the beginning that we were going to be one of the first ones to close. And that probably one of the last ones to reopen," McGrath said. "We love movies, movies are our life. They're not essential in the way that a grocery store or a nurse or something like that is in terms of prioritization. So we absolutely understand that."

She plans to speak with the county on Monday to see what vaccine plans they can make -- so they feel comfortable opening their doors as soon as possible.

Even when they do feel ready, she said they will probably start with groups of 40 to 50 in the 363-seat auditorium.

"Making sure that we are doing everything we can to make people feel safe and welcome," she said. "So we'll probably open for a few days a week and then slowly increase both the number of days and the number of people."

In the meantime, they're planning on year two of their outdoor spring/summer movie series on the baseball diamond as well as building another small auditorium into the theater.

Even with opportunities to reopen -- the fate of in-person movie theaters remains unclear as streaming boomed during the pandemic. McGrath, however, doesn't think the two are mutually exclusive.

“Streaming is great. But there really is nothing that beats getting that cold soda and the fresh popcorn and sitting down with your friends and watching a movie on the big screen," she said. "So I think they'll come back.”

After all -- she said -- they've made it through the "most challenging thing [she's] had to do as a leader."

"There is a sense that we're going to come out of this stronger because we have survived it together. We've been through something together," McGrath said. "And so I think ultimately, we're, we're gonna be okay. The sun is shining, it feels like you know ... things are on their way to being normal."

More reopening information is forthcoming pending her meeting with the county and stakeholders.